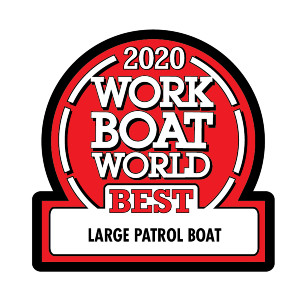 This is a very special vessel. Effectively, it is a multi-purpose warship that has been custom designed and built to accommodate the very particular archipelagic patrol, rescue and disaster relief requirements of the rapidly reforming Philippine Coast Guard.

Very unusually for such a large OPV, she is of all aluminium construction, making her, among other virtues, much lighter and less fuel consuming than similarly sized steel vessels. She should also have significantly lower maintenance costs than her steel counterparts.

She has been designed with multiple roles very much in mind. She is unusually versatile. Her size and range ensure she can likely cope with any mission likely to come her way. OCEA has certainly excelled itself with the adoption and fulfilment of this complex requirement for a unique ship. The design task was particularly complex but it was completed with maximum cooperation between two quite different cultures. By all accounts the PCG is delighted with its very impressive and different new ship.

Gabriela Silang was a very brave and farsighted project on the parts of both builder and owner.

As part of its massive Port and Coast Guard Development Programme, the Philippines Government has invested heavily to improve the safety and efficiency of its “National Marine Highway”. Part of that investment incorporates a number of new inshore and offshore patrol vessels of which the Gabriela Silang is the largest and most important.

The programme is already paying off significantly as has been evidenced by the remarkable reduction in marine fatalities and injuries that has been achieved in the six years since it commenced.

Since its delivery nearly 12 months ago, the Gabriela Silang, the Philippine Coast Guard’s largest vessel, with its enormous capability, has been a major contributor to the improvements in both safety and efficiency that have been achieved.

The all-aluminium OPV is intended for a long, low-maintenance life under arduous tropical conditions. It has been equipped for minimum fuel consumption and emissions. With two MTU main engines driving through Leroy-Somer electric drives, the vessel is a hybrid with many other benefits in terms of operational flexibility.

At 84 by 16 metres, she is roughly the size of a World War II corvette but is significantly lighter. Equipped with a helicopter pad and hangar and davits for two 9.5-metre fast RIBs, the ship has enormous capability and versatility for her patrol, surveillance, emergency response and disaster relief roles. She operates with a crew of 44 but can carry many more in emergency situations. With a range of 8,000 nautical miles at 12 knots and a top speed of 22 knots, she can cover the 7,100-island Philippine archipelago very effectively.

“She is a unique and highly capable vessel, and we saw just how much this was proven to be true in the months following her hand-over to the Philippine Coast Guard,” OCEA told Baird Maritime. “Her excellent stability, her ability to carry up to 500 people, her operability in all sea state conditions, and her significantly lower fuel consumption compared to other PCG vessels enabled it to perform a diverse range of missions, and even her delivery voyage to home waters saw her being used in an operational capacity for the very first time.”

Specifically, the builder was referring to the OPV’s maiden voyage in January 2020, wherein the ship had to make a detour while sailing home for Manila, so that it could aid in the repatriation of Filipino citizens who had become displaced in the Middle East due to rising US-Iran tensions and the ongoing civil war in Libya. When the situation in the Middle East improved, the ship was instructed to resume its homeward journey, eventually reaching Philippine waters in April.

“Her attributes came to the fore especially following her arrival in the Philippines,” OCEA added. “This was after the time the Covid-19 pandemic began having an impact on the country, and so the OPV ended up becoming the most-used vessel in the PCG.”

Even amidst the pandemic, the Philippines continued to be beset by typhoons, and so the OPV ended up spearheading the coast guard’s efforts to deliver humanitarian relief to the areas most affected by the severe weather disturbances in the last quarter of 2020.

“With the new MARPOL regulations and the creation of emission control areas (ECAs),” OCEA told Baird Maritime, “ships need to have reduced environmental impact. In order to stay within the limits set by the regulations, ship design must take innovative solutions – such as alternative propulsion technology and exhaust gas purification systems – into account.”

The PCG OPV is one such step towards achieving reduced environmental impact with regards to shipbuilding. Its use of aluminium validated the notion that a large vessel could indeed operate with a lower requirement for propulsive power yet still be every bit as capable and as versatile as its contemporaries that were built using more traditional hull materials.

“We are happy that the PCG is satisfied with our product, which we can claim as one of the highlights of this past year,” OCEA added.

“We are quite optimistic about the future, since our activity is based on strong market segments. We believe that, for as long as our focus is on the transport, safety, and security markets, we are certain to enjoy continued growth despite whatever crises come our way.”