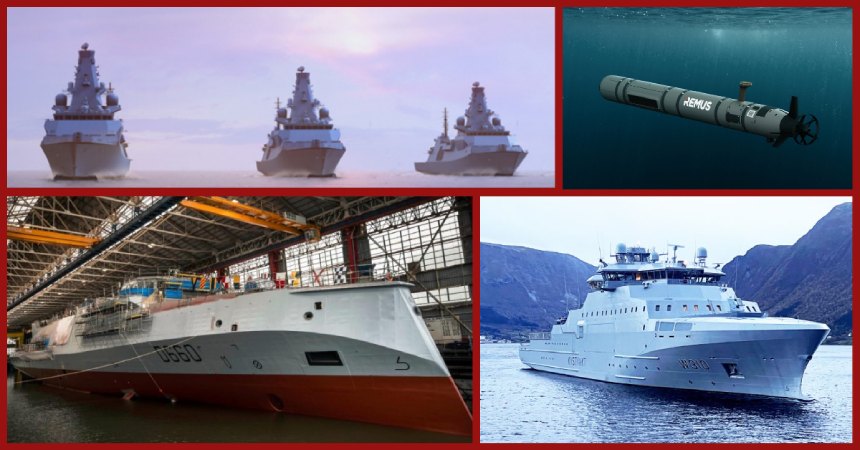 The future NoCGV Jan Mayen is the lead ship of a new class of OPVs that will replace the coast guard’s 1980s-built Nordkapp-class.

The 136-metre, 10,400-tonne vessel was built by Vard at its Vard Tulcea facilities in Romania. Missions will include maritime sovereignty patrols, fisheries enforcement, environmental protection, and CBRN incident response.

Delivery is scheduled for 2024. The remaining four FDI ships will be handed over by 2030.

US defence firm unveils new UUV for naval use

Each craft in the series will have a battery life of up to 110 hours and a range of 275 nautical miles. Missions will include mine countermeasures, hydrographic surveys, intelligence collection, surveillance, and electronic warfare.

Multiple UUVs operating collaboratively can be deployed from submarines, small manned or unmanned boats, amphibious ships, surface combatants, and helicopters. Each UUV can also be used as a platform to launch and operate other unmanned vehicles or payloads from beneath the sea.

The UK Ministry of Defence (MOD) has awarded a £4.2 billion (US$4.95 billion) contract to BAE Systems to manufacture the next five Type 26 or City-class frigates for the Royal Navy.

The Type 26 ships will be designed for anti-submarine warfare and air defence but can quickly be adapted to transport significant volumes of humanitarian aid and to house medical facilities.

Three Type 26 ships are already under construction BAE System’s Glasgow facilities. Class lead ship HMS Glasgow is scheduled for launching before the end of this year and will be delivered to the Royal Navy in the mid-2020s.