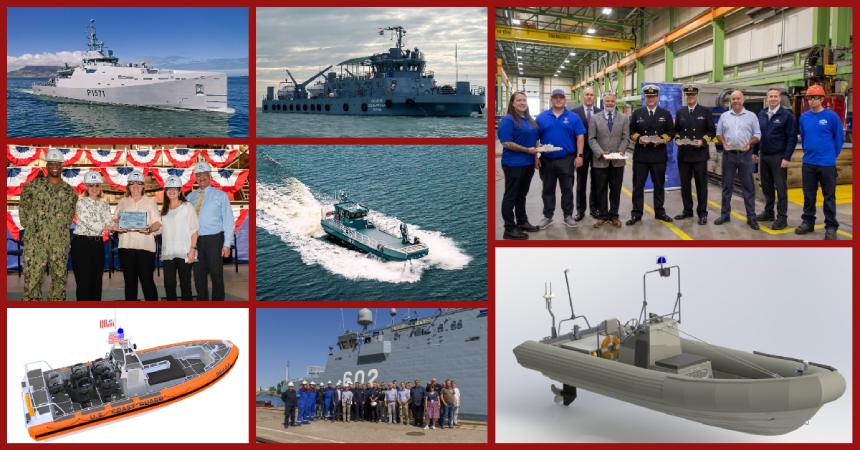 Recent deliveries include a landing ship for Indonesia, a minehunter for Poland, a support workboat for Finland, and three border security vessels for India. Construction is also underway on new vessels for the Royal Canadian Navy and the US Navy and Coast Guard.

The delivery of the three newbuilds marks the completion of all nine FBOPs in a series ordered by the BSF for operation along India’s eastern and western maritime borders.

Like their sisters, the three new FBOPs will operate primarily as floating staging bases for smaller BSF patrol boats. Each vessel will also have hold space for petrol, fresh water, food, and other provisions needed by the patrol boats’ crews.

The 19.2-metre boat is the first in a planned class of nine to be built by Kewatec. Deliveries of all nine vessels will be completed by 2024.

The newbuild has space for two crewmembers, a deck crane, and capacity for 15,000 kilograms of cargo and or additional personnel. Two Scania DI13 engines will drive Kongsberg KaMeWa waterjets to propel the boat to speeds of up to 25 knots.

The future ORP Albatros was built by a consortium of local companies. It measures 58 by 10 metres and is crewed by 45 personnel.

The ship is the seventh to be completed in the nine-strong Teluk Bintuni-class LSTs but was preceded into service by sister vessels KRI Teluk Weda and KRI Teluk Wondama, which were commissioned in 2021.

Built by local shipyard Daya Radar Utama, Teluk Calang measures 120 metres long and can transport up to 361 troops besides its crew of 120. The ship’s vehicle deck can house various vehicles such as lorries, armoured personnel carriers, and Leopard 2 main battle tanks.

Huntington Ingalls Industries’ (HII) Ingalls Shipbuilding division in Pascagoula, Mississippi, has laid the keel of the future USS Jeremiah Denton, an Arleigh Burke-class guided missile destroyer being built for the US Navy.

The ship honours the late US Senator and retired US Navy Rear Admiral Jeremiah Denton, who was a naval aviator and prisoner of war during the Vietnam War.

The navy’s sixth AOPS honours Lieutenant Robert Hampton Gray, a Royal Canadian Navy fighter pilot who was posthumously awarded the Victoria Cross for his actions against Japanese forces in the closing days of World War II. The action for which Lieutenant Gray received the decoration occurred just days before the Japanese announced their intention to surrender unconditionally to the Allies, bringing an end to the conflict.

The US Coast Guard has awarded Inventech Marine Solutions of Bremerton, Washington, a US$103.6 million contract for the construction of up to 200 over the horizon cutter boats.

Each boat will have an aluminium hull, a length of 25 feet (7.62 metres), and a Cummins QSB 6.7 engine driving a Hamilton waterjet with joystick controls. The propulsion will deliver operating speeds of between 30 and 40 knots.

The construction of all boats stipulated in the contract will potentially take place over 10 years.

Production begins on new RIB tenders for US Navy

Ribcraft will build up to 278 examples of the RIB under the multi-year contract.

The boats will serve as the Ready Service Life Boats on all US Navy ships sailing around the world. As multi-purpose platforms, they will serve several secondary missions including anti-terrorism/force protection operations, search and rescue, vessel boarding search and seizure (VBSS), and maritime interdiction operations.

A critical operational requirement for the shipboard RIB is that each boat must be carried aboard and deployed from a variety of US Navy ship classes. To accomplish this, Ribcraft will build three variants under the contract.

Two variants are specific to the launch, recovery, and handling systems found on the classes with the third variant being a SOLAS-certified craft intended for the Military Sealift Command.

Each vessel is powered by a single Steyr SE266E40 diesel engine that will deliver a sprint speed of 25 knots. A full load of 18 personnel including crew can be accommodated.

The Armaments Corporation of South Africa (ARMSCOR), the South African government’s defence procurement agency, recently confirmed that delivery of the second of three 62-metre multi-mission inshore patrol vessels (MMIPVs) ordered for the country’s navy has been re-scheduled, with the target date now moved to April 2023.

ARMSCOR had earlier stated that the September 2022 delivery date for the second MMIPV needed to be revised due to supply delays caused by Covid-19 and a request by navy officials for crew training to be carried out at the facilities of local contractor Damen Shipyards Cape Town instead of the navy’s own installations.

The agency nonetheless assured that risks of further delays are low and that the second and third MMIPVs will be delivered ahead of their respective revised schedules.

The original plan was for six Damen-built, Warrior-class MMIPVs to be built for the South African Navy. However, local media reports said the navy could only acquire three such vessels due to budget constraints.