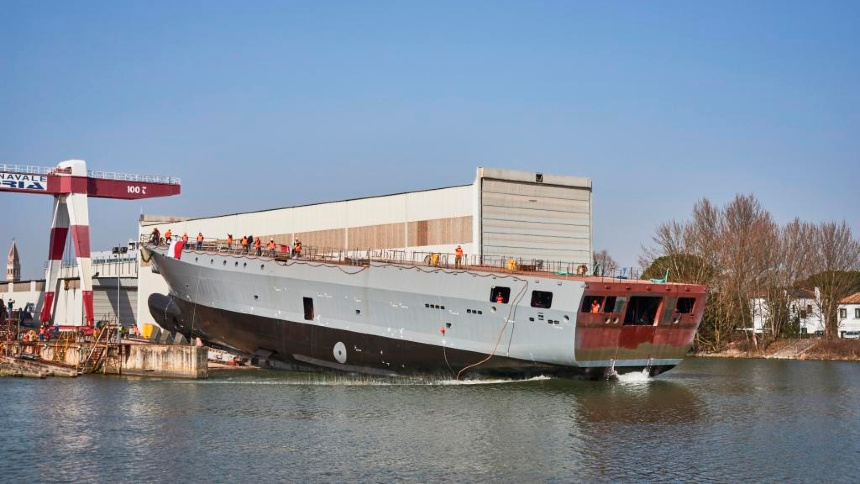 Italy’s Vittoria Shipyard launched the hull of a new offshore patrol vessel (OPV) at its Adria facilities on Saturday, February 27.

Once in service, P71 will become the new flagship of the Maritime Squadron of the Armed Forces of Malta, replacing the 2005-built P61 in that role.

Missions will include coastal monitoring, extended offshore patrols, and search and rescue (SAR).

The €48.5 million (US$58.5 million) vessel was co-financed by the EU as part of the 2014-2020 Internal Security Fund (ISF), which was established to implement internal security strategy, cooperation related to law enforcement, and management of the external borders of European countries.

P71 will have a full load displacement of 1,800 tonnes, an LOA of 74.8 metres, a beam of 13 metres, a draught of 3.8 metres, a speed of 20 knots, and space for 50 crew and 20 additional personnel. The vessel will be powered by a hybrid propulsion system consisting of two 5,440kW diesel engines and two electric motors.

The armament will include a remote-controlled 25-millimetre autocannon and light machine guns while the integrated command, control, and navigation system will consist of a 2D surveillance radar and satellite communications.

There will also be a flight deck that can accommodate a seven-tonne utility helicopter and a stern launch and recovery station for one 9.1-metre rigid hull inflatable boat (RHIB). Another station also intended for a 9.1-metre RHIB will be located on the starboard side of the platform in the central area of the vessel.

Both RHIBs will be capable of a maximum speed of more than 40 knots and will be used for SAR and sea traffic control operations.

The OPV was designed and is being built under the supervision of the American Bureau of Shipping (ABS).