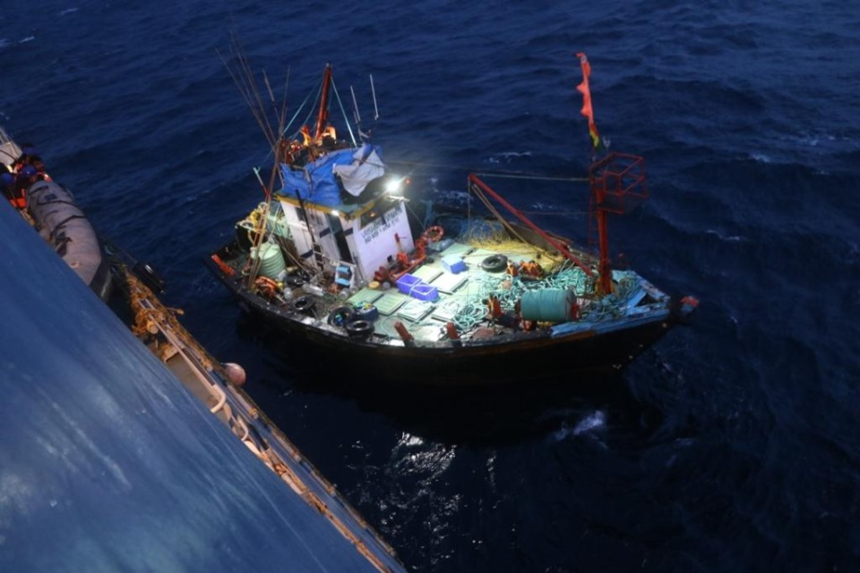 An Indian Navy ship came to the aid of the crew of a fishing vessel in distress in the high seas on Saturday, October 26.

The Talwar-class guided missile frigate INS Teg was sailing home following a deployment in the Arabian Sea when it was ordered to divert to an area off Mumbai to render assistance to the crew of the fishing boat Vaishno Devi Mata. The fishing boat had developed engine failure and began experiencing water ingress in rough seas with wind speeds of about 45 knots.

The distressed crew then tethered their vessel to a nearby offshore oil and gas platform. The personnel on board the platform attempted to pass additional ropes and extract the crew but could only get one of the fishermen to safety on the platform before the rope became severed.

SCI Urja, a platform supply vessel (PSV), sailed to the area in response to Vaishno Devi Mata‘s distress call and attempted to tow the fishing boat to safety but found it increasingly difficult due to the severe weather conditions.

Teg then arrived to provide support and undertake rescue operations. After making multiple approaches to the distressed vessel, the navy crew managed to bring all 17 fishermen safely on board their frigate.

Navy officials said the fishing boat sank just minutes after the last of the survivors was brought on board Teg.

The rescued fishermen have since been brought to Mumbai. All are reported to be in good health with no serious injuries.