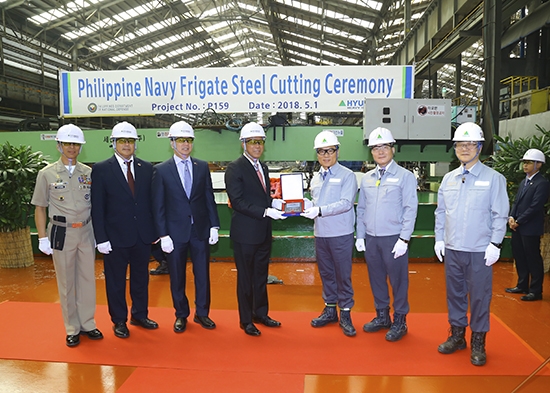 South Korean shipbuilder Hyundai Heavy Industries (HHI) held a steel-cutting ceremony in their Ulsan headquarters on Tuesday, May 1, for the first of two new multi-purpose frigates for the Philippine Navy.

The ceremony occurred on the second day of Mr Lorenzana’s most recent official visit to South Korea, which began with a courtesy call to the country’s defence minister, Song Young-moo, on April 30. The defence chiefs of the two countries have pledged increased cooperation in the areas of territorial defence and arms development.

A contract price of 18 billion pesos (US$350 million) makes the acquisition of the HHI-built frigates one of the biggest projects under the Armed Forces of the Philippines’ ongoing modernisation program aimed at significantly bolstering the country’s territorial defence capability.

As part of the modernisation efforts, the Philippine Navy has recently stepped up the decommissioning of older vessels in the fleet to make way for the HHI-built frigates and other newer warships built locally and abroad.

The new frigates are themselves variants of the South Korean Navy’s six Incheon-class 114-metre coastal defence ships, three of which were also built by HHI with the remaining three constructed by STX Offshore and Shipbuilding in Jinhae. HHI-built lead ship ROKS Incheon was commissioned in 2013 while STX-built ROKS Gwangju, the last ship in the class, entered operational service in 2016.

Each new Philippine Navy frigate will have a length of 107 metres, a displacement of 2,600 tonnes, a maximum speed of 25 knots, and a cruising range of 4,500 nautical miles. Onboard weapons, which are optimised for anti-aircraft and anti-submarine warfare, will include 76-millimetre naval guns, torpedoes, and surface-to-air missiles.

The first HHI-built Philippine Navy frigate is expected to be completed by May 2019 in time for eventual delivery to Manila during the second half of 2020. Construction of the second frigate will commence in September this year with a target delivery during the first half of 2021.

The HHI frigates comprise the Philippines’ second major acquisition of South Korean-built military hardware after the 2014 purchase of one dozen Korea Aerospace Industries FA-50 supersonic jet fighter trainers with a total contract cost of 18.9 billion pesos (US$421 million in 2014).