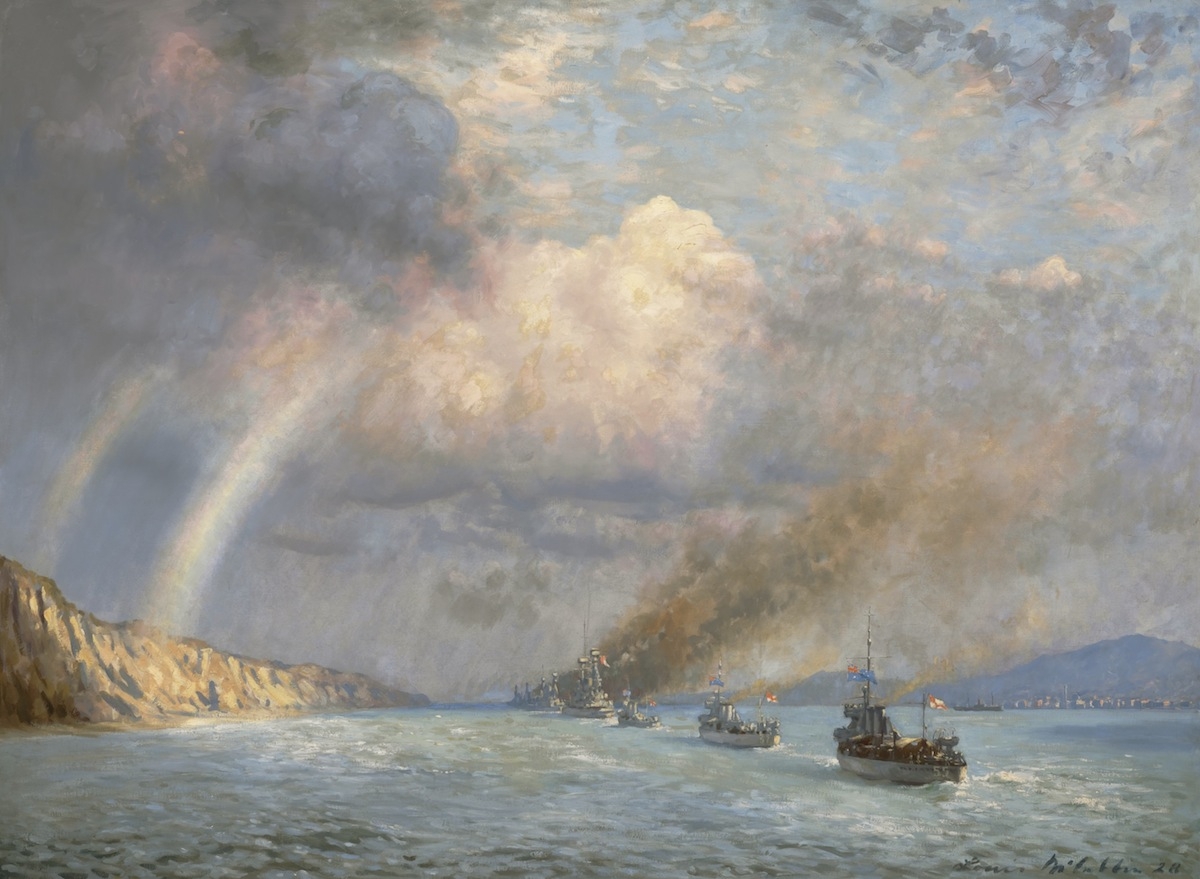 The guns on the Western Front had fallen silent and the armistice had been signed, but in Eastern Europe there was no peace. In Russia the civil war between the Imperial “White” government and the Bolshevik “Reds” was dragging on into its second year and soon the RAN would also become involved.

When the war ended, there were seven Australian warships serving in the Mediterranean: the destroyers HMA Ships Huon, Parramatta, Swan, Torrens, Warrego and Yarra and the light cruiser HMAS Brisbane. In addition, some RAN officers were attached to ships of the Royal Navy serving in the region.

On November 12, 1918, the day after the armistice was signed, Parramatta, Torrens and Yarra steamed through the Dardanelles and began operations in the Sea of Marmara enforcing the terms of the Turkish surrender. By early December they had been joined by the other three destroyers and Brisbane.

All seven ships were soon involved in carrying out additional duties in the Black Sea in support of Allied (British, French and Italian) forces supporting the White Russians against the Bolsheviks. Parramatta and Swan (which had arrived at Constantinople on November 21) became part of a larger Allied naval task force, entering the Black Sea on the 25th and the next day were anchored off the port of Sevastopol (Crimean peninsula).

Ashore, the situation was confused, with stray German and Austro-Hungarian units still in the area as well as White Russian and Bolshevik forces. Russian navy ships were in the harbour and a number of scuttled German torpedo boats could also be seen.

“If ever a city needed policing, Sevastopol did”

Parramatta was then employed as a dispatch vessel steaming from Sevastopol to Constantinople (Istanbul) on a regular basis delivering mail and signals to the various commanders and ships, as well as carrying passengers as required. She continued in this role until December 16. Yarra and Torrens went to the Russian ports of Novorossiysk and Batumi, on the eastern coast of the Black Sea. Yarra was later used to move a cargo of ammunition, petrol and two motorcycles to Sevastopol for use by British personnel ashore.

Warrego arrived at Constantinople on December 1, 1918 and was also briefly attached to the British forces operating in the Black Sea. Huon entered the Dardanelles on December 3 and arrived at Sevastopol on the 7th. Her ships company noted that German soldiers were being employed to provide security in the area in case of Bolshevik attack.

She sailed on December 9 and proceeded east to the port of Theodesia (Fedoesia), where she went alongside on the 10th in a show of force. Huon departed Theodesia the next day and returned to Sevastopol on December 12, where she took the captured German submarine UC 37 in tow to Constantinople. She then operated in the Sea of Marmara for the remainder of the month.

The cruiser Brisbane also served briefly in the Black Sea. On December 8, she embarked 345 Royal Marines at Chanak (Cannakale) and steamed, at 22 knots, to Sevastopol, disembarking them on the 10th. With the aid of a captured German chart, the cruiser entered harbour avoiding a large defensive minefield before offloading the British troops who proceeded to restore order in the city. Some desultory shots were fired at Brisbane but the marines landed safely.

One of Brisbane’s officers later wrote,”Our Marines were landed to police the city, and if ever a city needed policing, Sevastopol did. The rounding up of Bolsheviks and putting an end to their ghastly ways and filthy practices, and their habit of creating dirt and ruin of everything they touched was a large order … It was with deep regret that the Brisbane received the order to Smyrna (Izmir) and leave others to attend to the business here.”

While the RAN ships were at Sevastopol, they kept a landing party on standby and small arms were available for immediate use. No attacks were made on the ship but occasional sniping kept the crews motivated.

“The Bolshevik forces broke through”

Of the Australian ships it was Swan that was to play the most significant role in the region. On December 4, Swan (under Commander Arthur Bond, RN), in company with the French destroyer Bisson (Captaine de Corvette Cochin) was sent on a special mission to the Sea of Azov (northeast of the Crimea) to make contact with White Russian forces in that area.

The destroyers were chosen because the only entrance to the Sea of Azov was via the shallow Strait of Kerch and all navigational beacons in the area had been destroyed. In early December Swan embarked the Russian Admiral Kononoff, and an interpreter, and transited the strait with Bisson; both ships had barely a foot of water under their keel. Steaming north they berthed at the port city of Mariupol during a heavy snowstorm.

On December 8, Commander Bond, accompanied by three officers and six ratings from Swan, and a similar sized French delegation from Bisson, boarded a train to travel to the cities of Rostov and Novocherkassk to inspect White Russian forces and facilities.

The combined Australian–French delegation was met by General Peter Krasnov, the Ataman of the Don Republic, commanding the White Russian forces, with much celebration. The entire Don Cossack regiment lined the streets to greet the delegation and a church service and banquet were held in their honour.

An inspection of military facilities and training camps was undertaken and the officers then visited frontline units by train and motor vehicle. Bond noted that the White Russian forces were exceptionally brave, but significantly outnumbered by the Bolsheviks and heavily reliant on captured arms and ammunition to continue the fight.

On December 14, the inspection tour was nearing the frontline near Bobrov (some 480 kilometres north of the Sea of Azov) when the Bolshevik forces broke through and forced them back to Mariupol where they rejoined Swan. The two Allied destroyers then steamed to Sevastopol where Bond delivered his written report, concerning the state of the White Russian forces, and this was dispatched to the British Foreign Office for review.

Swan remained at Sevastopol to support other Allied warships, due to a surge in Bolshevik activity near Inkerman (five kilometres east of Sevastopol), until sailing for Constantinople just prior to Christmas 1918.

On December 26, 1918, Huon, Parramatta, Swan and Yarra departed Constantinople bound for Malta, before continuing on to England for maintenance. Torrens and Warrego sailed a few days later also bound for England. Brisbane was at this stage still operating off Smyrna (Izmir) supporting minesweeping operations and the safe entry of shipping into the harbour. She departed Smyrna on January 4, 1919 for a refit in Portsmouth, England. This ended the RAN’s first involvement in the Russian Civil War.

In 1920, 12 RAN midshipmen saw service in southern Russia while on loan to the Royal Navy. The RAN College class of 1915, graduating in late 1918, arrived in England in early 1919 and was too late to see active service. In May 1919, however, midshipmen Chesterman, Dowling, Hall, Hewitt, Rorke and Rosenthal joined the battleship HMS Ramillies while their classmates midshipmen Hodgeson, Hore, Miller, Selk, Townsend and Walker went to the battleship HMS Revenge.

“This lack of adventure caused Boag to desert”

During 1920, both battleships served in the Black Sea as part of the Royal Navy force protecting British interests in that region during both the Russian Civil War (1917–22) and the Greco-Turkish War (1919–22). The ships conducted operations at Batumi in April and Sevastopol and Yalta in August. Landing parties of sailors and marines were frequently put ashore as a show of force and on one occasion the midshipmen were able to visit the Crimean War battlefields including Balaclava, Inkerman and the “Valley of Death” where the charge of the light brigade took place on October 25, 1854.

All 12 midshipmen were subsequently awarded the British War Medal and Victory Medal for their service in Russia. The criteria for the award of these medals normally had a cessation date of November 11, 1918 except for those personnel serving in Russia, and adjacent waters, during the Russian Civil War.

One member of the RAN did serve in North Russia in 1919, but by a very circuitous route. John Edward Boag enlisted in the RAN as a HMAS Tingira boy on June 8, 1916 and in January 1918 joined the light cruiser HMAS Encounter as an ordinary telegraphist 2nd class. The cruiser was employed on convoy escort and patrol duties, in Australian waters, and this lack of adventure caused Boag to desert in June 1918 and enlist in the 1st AIF as Private Edward Redmond (10th Battalion).

He arrived in France shortly after the armistice was signed, but was determined to see action and on May 28, 1919 enlisted in the 45th Battalion of the Royal Fusiliers (British Army) and went to Russia as part of the Allied North Russian Relief Force in June. Redmond (Boag) completed his service in North Russia in September 1919 and returned to England for discharge in January 1920.

Despite the efforts of Allied maritime and land forces, the White Russian forces collapsed and by late 1922 had been defeated by the Bolshevik forces on all fronts—although a few units held out in far eastern Russia until the middle of 1923. This ushered in the period of the Union of Soviet Socialist Republics (USSR), which lasted until its collapse in 1991.