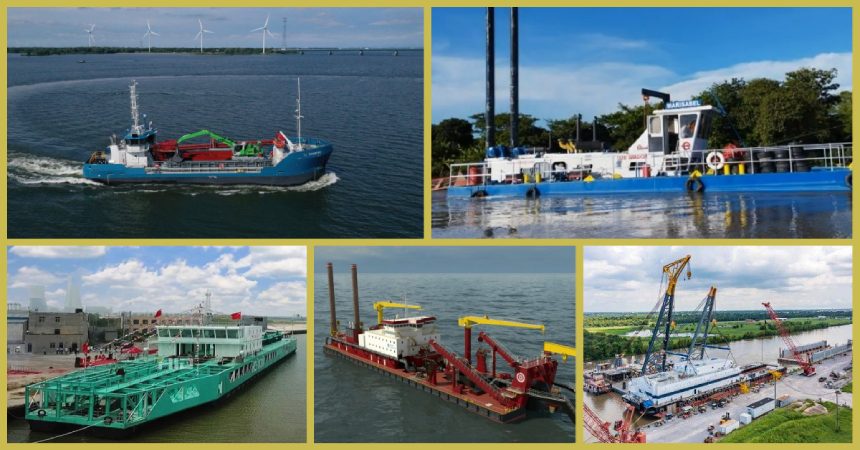 Newbuild dredgers for various roles have been delivered to operators in Colombia, Belgium, Spain, and Indonesia while construction is progressing on a large capacity dredger for an operator in Texas. A Dutch design has been selected for future deployment in America’s Great Lakes region.

Ellicott Dredges of Baltimore, Maryland, recently delivered a new dredger to Cormagdalena, a marine projects and river management company based in Colombia.

The vessel has a maximum digging depth of 15 metres and will be used to remove sediment from the 1,500-kilometre-long Magdalena River, Colombia’s longest river, over the next seven months. Two older Ellicott-built dredgers are also working on the project.

The purpose of the Magdalena River Project is to ensure navigability from Colombia’s main inland commercial hubs to the Caribbean Sea.

The 42-metre Sandborn has a hopper capacity of 400 cubic metres and diesel-electric propulsion.

Duties will include maintenance dredging and extraction of sand and aggregates.

Chinese builder HID Dredger has handed over a new dredger to an undisclosed client in Indonesia.

Lucky Star 168 measures 95 metres long and has a rated handling capacity of 700 tonnes per hour. It will be utilised primarily for tin ore dredging at sea.

The dredger is of welded steel construction while all surfaces are coated in wear-resistant paint.

Omvac Catorce is fitted with an excavator and is capable of digging at depths of up to 30 metres. The hopper has a total capacity of 1,200 cubic metres.

Texas-based Callan Marine has confirmed that the hull of the future cutter suction dredger (CSD) General Arnold was recently floated out at the Louisiana facilities of C&C Marine and Repair.

Delivery is scheduled for 2023. It will be the sixth CSD in the current Callan Marine fleet.

General Arnold is a near-identical sister of the CSD General MacArthur, which was delivered to Callan Marine in 2020.

Netherlands-based Vuyk Engineering Rotterdam has been selected to design a new CSD for US operator Great Lakes Dredge and Dock Company (GLDD).

The vessel will be capable of operating in harsh environments. It will also feature improved accommodation spaces for greater crew comfort.

The design will also emphasise easy access to all critical components. This will enable replacement and maintenance to be completed in less time.