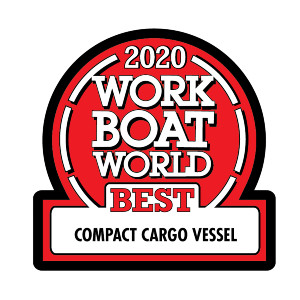 A diesel electric, hybrid and pure electric powered craft, it operates at 12 knots on two-hour voyages that can, depending on road congestion, save up to eight hours per trip. It will also save vast amounts of fuel, emissions and, probably, operator nerves.

The concept of comparatively small cargo catamarans operating across relatively narrow waterways has much to commend it. If you look at an atlas, it also has vast potential.

The incorporation of autonomous navigation from Sea Machines in Captain Ben Moore satisfies the criteria of lower emissions and digitisation in operations, both of which have been recognised by Incat Crowther as two of the biggest trends in the global maritime transport industry.

The company added that these then lead to improved efficiency (in both manufacturing and vessel operations) and vessel capability, further optimising costs on the part of operators.