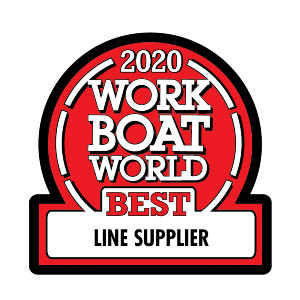 A very important part of the impressive new combined longliner and Danish seine fishing vessel Atlantic is its long line fishing lines that were created by the renowned Norwegian firm Fiskevegn.

Operating through a sophisticated “moon pool” in the 64-metre fishing boat, the longest in the North Atlantic longliner fleet, the long lines have been designed, like its parent vessel, for maximum catch efficiency and crew safety.

The owners of the Turkish-built vessel are very experienced and own the largest long lining fishing company in Norway. They know what they are about and what they can reasonably expect from their gear. That is why they ordered Fiskevegn long lines. They have already made Atlantic an incredibly efficient and economical fishing machine.

“The properties of different Fiskevegn Ocean-X lines are tuned for optimum ROI,” the company told Baird Maritime. “Optimal longline design requires a balancing of key properties whilst making as few compromises as possible. We also take into account that rope properties change over time.

Fiskevegn said that its lines are thus designed for maximum lifespan, minimal risk of losing catch, and the best possible coiling properties, within ROI constraints. The company added that users who buy longlines only for the ease of coiling of brand-new lines tend to forget that such lines may (1) grow stiffer as they age; (2) have inferior breaking load; and (3) have poor abrasion properties, may experience short-lived benefits, and even be subjected to excessive consumption of lines.

Fiskevegn remarked that its lines are known not only for their durability, but also for their environment-friendly features, as evidenced by a new product introduced in 2020.

“Longline fishing can be the cause of increased seabird mortality. This occurs when seabirds try to feed on the bait before it sinks out of reach. Fiskevegn addressed that concern by developing a fast-sinking integrated weight (IW) line in collaboration with scientists.”

The company said that the subsequent adoption of IW lines by the fishing feet that targets Patagonian toothfish has been hailed as a success in bird conservation. NGO BirdLife International even confirmed that the use of such lines has resulted in a 90 per cent reduction in the by-catch rate of white-chinned petrels.

“IW lines begin sinking immediately after hitting the water,” commented Fiskevegn, “whereas conventional lines may be held up by propeller turbulence for up to 80 metres astern. The IW lines plunge into the deep fast, rapidly sinking out of the diving range of most birds.”

The company further claimed that a positive by-product of these seabird conservation efforts is improved fishing. Bait is partly washed out and loses some of its attractiveness on the way through the water column. The fast-sinking IW lines thus offer more effective fishing times at the terminal fishing depth, and thus better bait utilisation.

Even with the introduction of such innovative products into the market, Fiskevegn also needed to adjust its operations in 2020 in light of the Covid-19 pandemic.

“Despite our being the only European manufacturer of swiveled longlines for the commercial autolining fleet,” the company told Baird Maritime, “we still encountered logistical problems as a result of Covid-19. Also, some of our customers ran into problems of their own in getting fishing crews in place.”

The company has therefore credited its good relations with customers and other partners for helping it achieve its targets over the previous year amid the challenges caused by the pandemic.

Fiskevegn has also expressed optimism about the future of the longline fishery industry, particularly due to this fishing method having continually proven itself as capable of handling and delivering catch of good quality.

“We have R&D projects going involving longlines and longline equipment, and it will be interesting to see what comes out of our efforts in the years ahead.”