The combined longliner and Danish seiner Atlantic was named in Aalesund, Norway on February 1. With a length of 64 metres and beam of 14 metres, the vessel became the largest longliner to date in the North Atlantic longliner fleet.

Built at Tersan Shipyard in Turkey, the vessel was built for operation with a diesel mechanical propulsion system as the primary mode, in diesel electric mode with auxiliary generators, and in short-term electric mode via the use of a battery package.

The owners were looking for a designer for their first ever newbuild when Skipsteknisk was contacted. They had previously built up their company from scratch and had in a very short time positioned it as one of the leading longlining companies in Norway. 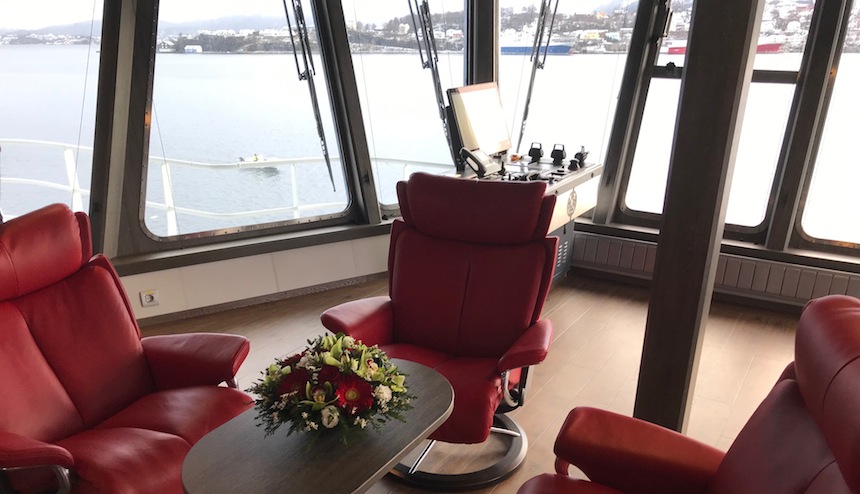 To continue its development, the owners were looking for a new vessel to take them into the future. The resulting design included the newest available solutions and technology in the fields of propulsion, power generation, catch-efficiency, fish handling, automation, crew safety and comfort.

Atlantic is the first purpose-built vessel combining the fishing methods of longlining and Danish seining – two very different fisheries. This gives the vessel a wider range of possibilities with regards to catching its quotas.

To ensure premium quality of the finished products for both fishing methods, unique onboard arrangements have been created, giving the vessel the means to carefully handle large quantities of fish in a short amount of time.

Skipsteknisk longliners have for a long time been equipped with a moonpool for safe operation and increased catch rates. The Atlantic design has made the moonpool a dual-purpose feature, also allowing for intermediate storage of catch when using Danish seine. The vessel is arranged for vacuum pumping from the stern and is equipped with a retractable azimuth thruster in the foreship to avoid any rotating propeller aft during this operation. 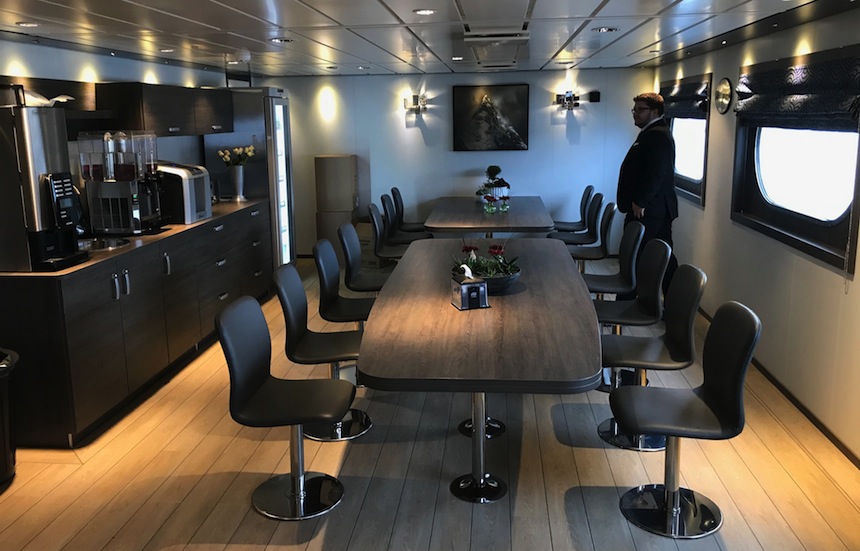 The propulsion system is also unique, being a hybrid system with both diesel mechanical, diesel electric and pure electric propulsion options for the main propeller. Combined with the forward azimuth thruster and aft tunnel thruster, this results in an incredibly flexible and redundant setup. The seakeeping characteristics of the vessel are extremely good and make for a stable and comfortable working platform.

The vessel will operate mainly in the North Sea and Barents Sea fishing quotas of cod, haddock and saithe. Other parts of the North Atlantic Ocean will occasionally be visited when the vessel has its turn utilising Norwegian trading quotas.

Atlantic was built as a replacement vessel and will increase the owner’s ability to flexibly catch and process its quotas. The previous vessel did not have any means to effectively utilise the quota for saithe, a species that has traditionally been caught with gillnets for this fleet group.

Rather than outfitting the new vessel with gillnets, the owners chose to go with Danish seine when approval for this was granted by the authorities.

“For us the biggest challenge with the Atlantic design was to combine longline and Danish seine in one working platform,” Skipsteknisk told Baird Maritime. “This required us to learn, adapt and do our best to make correct choices along the way. The entire process has been extremely rewarding for us working with an owner and shipyard that have been so solution orientated and positive.” 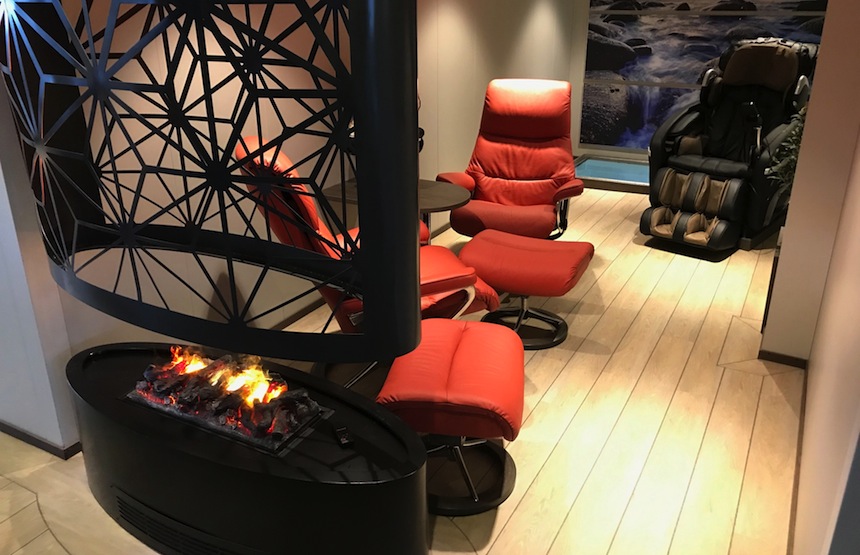 The vessel has two auxiliary Yanmar 6EY18AWL engines with 750 kWe output each at 900 rpm. Power from the generators can go through the PTI drive via the shaft alternator and the gearbox to the propeller.

Atlantic is also equipped with a Corvus battery pack, enabling fully electric short-term propulsion. The maximum output is approximately 600 kW for 20 minutes. The main intended function for the battery installation however is to provide peak shaving and peak load handling, balancing and supporting the electrical system to reduce wear on engines and other components.

In diesel mechanical mode the system can run with floating frequency (50-60Hz), meaning the main engine can run at a lower rpm. With the two-step gearbox, the propeller rpm can be lowered in order to maximise the economic range of the mechanical propulsion option.

The combined PTI drive then works as a clean power unit supplying consumers with fixed frequency power at 60 Hz. The switchboard is however split, so that consumers with separate frequency drives are supplied directly, thus reducing the size requirement of the drive and providing redundancy.

The vessel is equipped with a combined azimuth/tunnel thruster of 860kW from Brunvoll. This thruster can, in the lowered position, provide separate propulsion powered either by the main engine/shaft alternator, the auxiliary engines or the batteries. In the upper position it works as a tunnel thruster. In addition to serving several operational purposes it will also provide increased safety as a power take home option. The flexibility of the total propulsion/powering system is impressive. 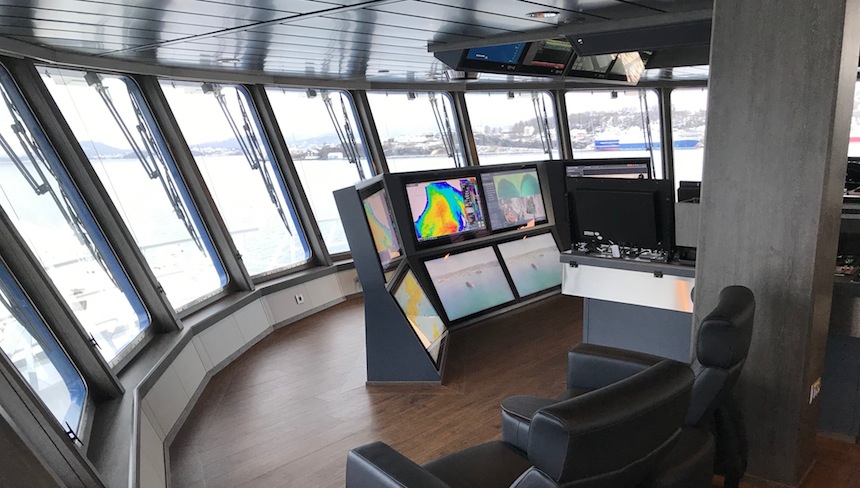 The longlining equipment was supplied by Mustad Autoline, and has a total capacity of around 72,000 hooks. The system provides the latest in automation and labour-reducing features. Lines and rigging were supplied by Fiskevegn.

The Danish seine equipment was supplied by Thyborøn Skibs and Motor, and comprise two rope drums, two net drums, movable gallow, blocks, auxiliary winches and hydraulics. The ropes, each 4,000 metres long, were supplied by Frøystad and the seine is supplied by Selstad.

Two KN-50 deck cranes were supplied by Triplex, rated for three tonnes at 14 metres. The aft crane is fitted with a net-laying adapter to aid with Danish seine operations.

The vacuum system was supplied by C-Flow, and additional fish handling equipment and factory by Optimar. Atlantic is a full factory vessel with the ability to produce both H&G and fillet products. Automatic freezers, block hotel, automatic packing, automatic palletising and a forklift in the cargo hold ensure that heavy lifting operations are no longer required from the crew. The freezing capacity of the factory is approximately 70 tonnes per day. 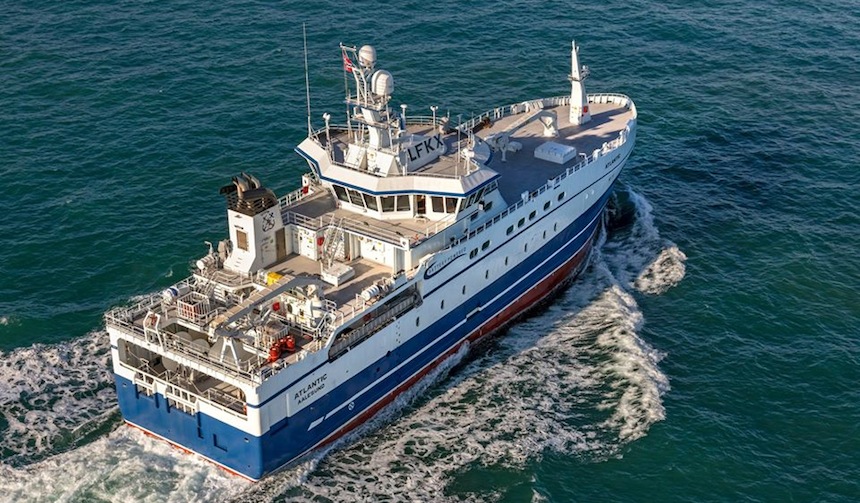 The Danish seine arrangement is sheltered on the Atlantic. This means that most of the equipment had to be fitted within a “box” made up of the ship’s sides and an overhead deck. The spooling devices for the rope winches are detached from the winch itself and mounted in the deck above in order to allow the rope to spool over the net drums – an intricate solution resulting in a sheltered working space for the crew and the best possible environment for the equipment.

The factory onboard the Atlantic is highly automated. The grading process includes a video/photo-based grading system called Vision. The system uses the images from a camera to do a volume calculation of the fish while identifying the species and thereby enabling a pre-grading of fish going to H&G or fillet production.

To reduce strain on the crew, nearly all lifting operations are eliminated through automation. After the freezers are filled with fresh fish, no more manual operations are required. Grading, packing and palletising processes are all automated. Finished pallets are placed in the cargo hold by use of a forklift. 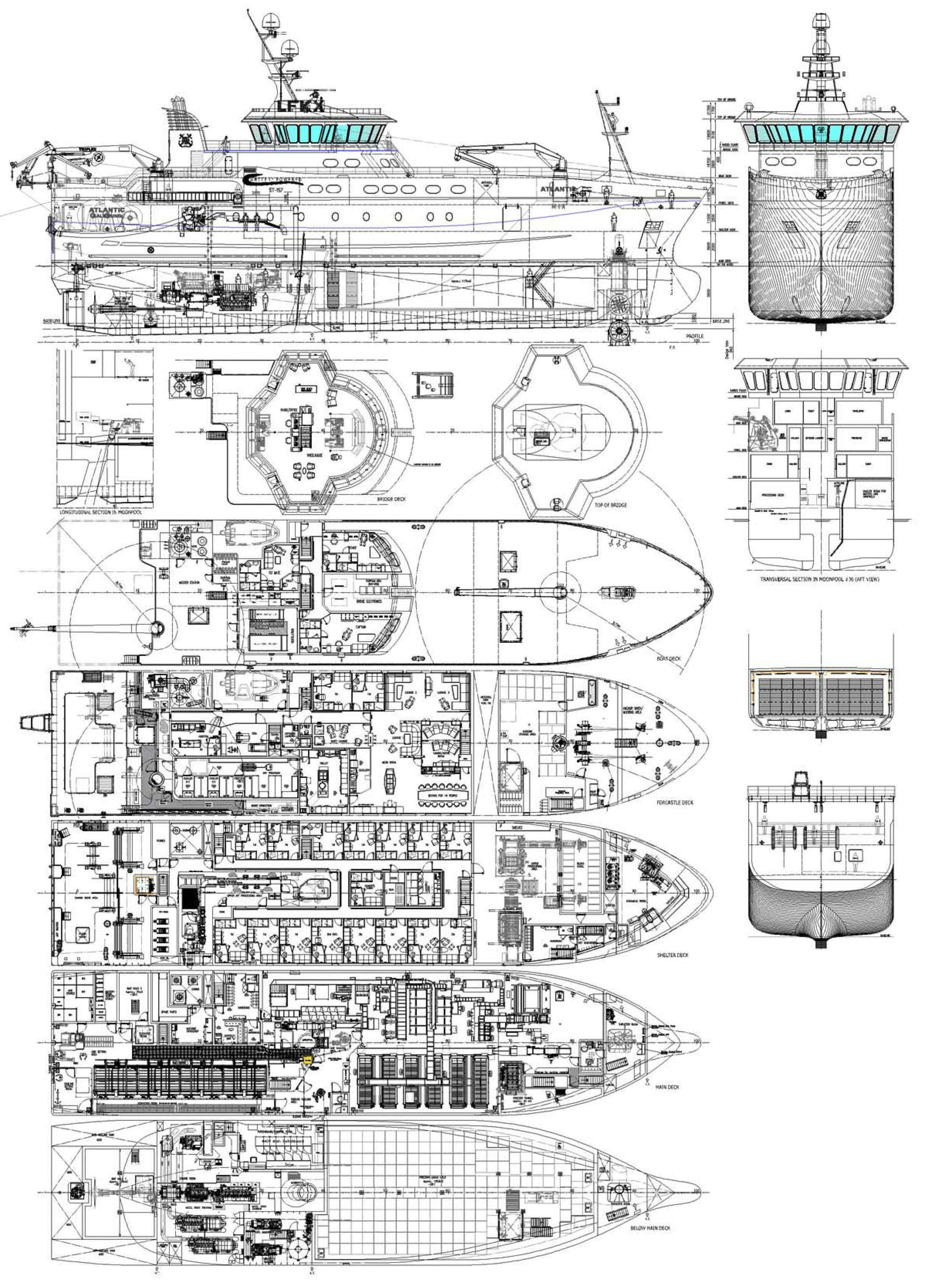