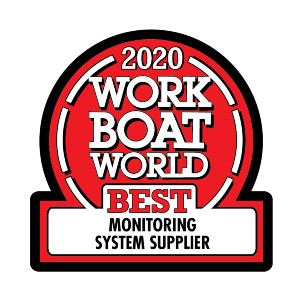 Marinelec Technologies based in Quimper, Brittany, is rapidly developing a name for itself well beyond its French homeland. Describing itself as a, “designer and manufacturer of electronic monitoring and alarm systems for the marine industry,” that description covers a multitude of capabilities.

The company monitors for fire, gas buildup, fluid levels and much more with powerful alarms to warn operators of any impending danger. Its ever-expanding range of monitors and alarms that are built to the highest marine standards have been fitted to every imaginable kind of ship and boat world-wide including fishing boats, ferries, tugs, OSVs, warships, pilot boats and yachts.

Two very impressive recent examples of Marinelec installations can be seen on the ferries Amiral and Capo Rosso that were built by the French-owned and -managed Chinese shipyard ODC that were reviewed here last year.

“We believe our products stand out for being customisable and their ability to be tailored to different vessels,” Marinelec told Baird Maritime. “These attributes were developed in response to the booming market for electric propulsion vessels operating in sensitive environments, inland navigation and marine protected areas.

“The use of such monitoring systems represents not only a reduction in the ecological footprint of maritime and fluvial transport, but also a change in technology. These state-of-the-art vessels, which integrate increasing amounts of equipment to ensure safety and comfort on board, are also more complex and thus require the monitoring of a whole host of data.”

To simplify access to information from the bridge and to enable the captain to make the right decisions to protect his or her passengers and crew, Marinelec developed M.Task, a new monitoring system with a unique interface that gathers together all the information and commands of the vessel to be monitored. This was carried out at the request of shipbuilder ODC Marine, a long-time partner of the company, which wanted its hybrid and electric vessel newbuildings to be equipped with that same system.

Marinelec further claimed that its business operations, and consequently its product offerings, are aimed at ensuring effective monitoring of onboard systems even as vessels grow in complexity over time.

“Electric shipping involves the monitoring of new equipment such as battery banks or chargers that were developed originally for land-based industries,” the company said. “They use communication systems we have adapted to our devices so that they will become compatible with vessels’ electric systems. Electronic propulsion, that is to say the electric engine or engines, the chargers or the battery bank composed of multiple cells, generate complementary information and thus every parameter has to be monitored: battery voltage, current and temperature; engine speed, current, torque and temperature, etc.

“We have incorporated specific components that were selected, all the while paying careful attention to ensure that they conform to the safety and quality standards that are applicable in the maritime sector. With our Asia sales manager, based in China, we were able to organise technical discussions with manufacturers all over the world to understand how the battery-power management system worked.”

This flexibility and technical knowledge have enabled new equipment to be incorporated in Marinelec’s existing monitoring systems, which the company has claimed as, “still way ahead of the market today.”

Marinelec also pointed out that charger and electric battery manufacturers also communicate via a CAN interface. However, they use protocols that are specific to their own equipment, to which, thanks to its expertise, the company had adapted its own input/output module program tailored to any request for features using this norm.

As all this was going on, ODC modified the onboard electronics of one of its newbuildings in order to accommodate the new monitoring system. The latter’s advantages became evident early on.

“Using the CAN bus enabled the ship’s cable to be made lighter by about 30 per cent,” Marinelec told Baird Maritime. “The multiplexed communication enables several data to travel along just two wires. This has enabled the yard to standardise network architecture.”

Perhaps more importantly, however, the new system was designed to enable crews who are unfamiliar with operating hybrid vessels to easily transition. To that end, Marinelec also developed specific programs for its input/output module as well as an ergonomic and intuitive interface with a touch screen and easy-to-identify pictograms. The result is that the operator can see the state of the vessel’s critical systems that are connected to the monitoring system.

The system also includes a highly resistant computer (human-machine interface), which interacts with an input/ output module housed in a compartment formed of electronic cards communicating via hardwired terminations. Marinelec claims the equipment has an in-service life of tens of thousands of hours.

“The objective was to improve safety and facilitate decision-making by alerting the vessel owner in real-time to any anomaly by means of an alarm,” the company added.

M.Task was not the only major product and service offering to be introduced by Marinelec in 2020. One of the critical projects it carried out was standardising its other existing alarm and monitoring systems to make them more customisable, configurable, and able to adapt to various shipbuilding norms and operational constraints.

“We made some new evolutions on our ‘marine advanced customisable and creative solutions’ (MACCS) system. It is a new generation alarm system that marks a break from previous products that were mostly available in the form of alarm panels.”

MACCS is a control and monitoring system that integrates all the control and alarm functions on board small to medium tonnage vessels. It can be customised and is configurable by the yard. It is adaptable, which enables the addition of extra modules according to customer needs. An alarm relay installed onboard will immediately inform the captain of the slightest anomaly by sending an SMS to his or her mobile phone.

The company also introduced a new system for control and monitoring of navigation lights and another for control of signal light columns and foghorns.

“Our new NORMA_AFF navigation light control and alarm system now boasts integrated software,” Marinelec told Baird Maritime, “enabling the user to configure the interface according to his or her needs. It also has a new feature that requires no tools and has been simplified by the addition of a selection of predefined ship silhouettes. This brings flexibility and reactivity to the installer and optimises user comfort by adapting to the size of the ship.

“Meanwhile, our AVAS sound and light signalling device sequencer offers a centralised visual and sound signalling device system for ships, all in a single piece of equipment. This approved system is a three-in-one system that combines the general alarm system, the sound signal sequencer, and the foghorn or ‘whistle.’ It is suitable for all types of ships.”

Recently, Marinelec also launced PHILAE, a modular, conventional, extended capacity fire detection panel that also incorporates the company’s simple and easy to install detection panels. The new PHILAE panel has already undergone extensive laboratory testing and is suitable for installation onboard all types of vessels, thanks to its modular system that enables it to cover up to 28 zones.

Although the expansion of its product portfolio is impressive by all accounts, Marinelec also had to reconfigure its operations in 2020 due to Covid-19.

“We’ve focused mainly on R&D and export,” the company told Baird Maritime. “We work hard especially to help develop Asian markets. Despite a few obstacles, we have continued to do business with our Asian customers at a slower but steady pace. We have been established in Asia for several years through our subsidiary Marinelec Technologies Asia, based in Singapore, and we have chosen to strengthen our relationship with the Chinese market by basing a sales representative there since the beginning of 2020.

The company has also been expanding its network of local partners in Asia. For instance, one of its fire detection systems has been successfully installed on a Chinese-built jackup rig.

“We are seeking to develop niche products or products with high added value in niche markets,” added Marinelec.

The company credits these successes to its culture of innovation and its goal of optimising operations for the safety of vessels and their crews. It has also decided to adopt a global approach, and this has enabled it to develop products that are suitable for use on various types of vessels found throughout the world, not just those in a certain country or region.

“We have long been aware that we needed to pool our research and development efforts and that the products we develop are adaptable to everyone, from the small 12-metre tug to the 350-metre ocean liner,” Marinelec explained.

As a result, the company’s products are becoming increasingly modular, configurable, and customisable to enable its local distribution partners to carry out the installations themselves in response to customers’ growing demand for such flexible, reliable, and capable systems.

Reliability is one attribute that Marinelec said is starting to become increasingly important among customers. To that end, the company’s products have been designed to be proactive, activating upstream of any breakdown or incident, to ensure the safety of equipment and crew and the optimisation of maintenance.

“Also,” Marinelec added, “a single interface centralises all the information and, by making it intelligent, preventive maintenance can be carried out. This is crucial for hybrid vessels with battery banks, cooling pumps and electric motors that all need special attention to ensure a longer in-service life. We have thus developed specific preventive maintenance features, such as time meters and pre-failure alarms. These act as a maintenance guide for the entire vessel for the client, so as to optimise its use.”

Since customers are clamouring for increased vessel operating efficiency, Marinelec developed ECOMER, a new device for collecting and analysing consumption data, item by item, to reduce fuel consumption and polluting gas emissions. ECOMER can also collect environmental data such as wind strength, sea state or current and positioning data, with a routing function.

“Data is becoming a real asset, both for the shipping industry, which deploys technical solutions, and for shipowners who optimise the operational management of their ships. So, we provide also solutions to manage and value information. The collected data via ECOMER is used to identify progress margins, to prepare ship upgrades, to plan maintenance operations, etc.

“Instrumented equipment and suitable sensors enable to process data collected in operation. Their analysis enables shipyards, architects and design offices to assess the ship’s characteristics or to implement corrective measures, while equipment manufacturers can improve their industrial processes and adapt the design of their equipment.”