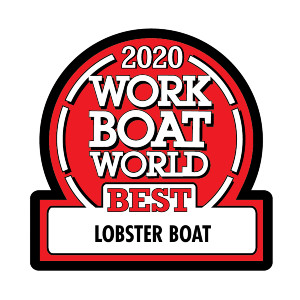 An elegant, efficient, yacht-like and very safe fishing boat from the globally renowned partnership of Southerly Designs and Dongara Marine, Force of Nature is a typical example of their creations. Essentially, the same hull can be used for a number of roles including lobster, pilot and patrol boats and, perhaps, even a yacht.

Its closely related designer and builder grew out of the lobster fishing industry in the town of Dongara on the West Australian west coast. This highly-refined design is constructed with an aluminium hull and deck and FRP composite superstructure.

While built as a very efficient fishing machine for its experienced owner, Force of Nature does not lack comfort or finish. Top speed is 24.5 knots but, more importantly, at 20 knots she only drinks eight litres per nautical mile and can cover 1,625 nautical miles at 12 knots with her 7,580-litre tanks. She is equipped with twin diesels, ZF gearboxes and Veem propellers.

“The boat really represents the continuing evolution of the archetypal west coast cray boat,” Southerly Designs’ Andrew Taylor told Baird Maritime, “backing down from the maxi size vessels built recently. Everything about Force of Nature speaks of refinement – hull form, machinery, styling systems and outfit. The boat is about keeping it simple, functional, cost effective and low maintenance, while still providing an exceptional level of performance, comfort and style.”

For builder Dongara Marine, performance is the more dominant factor when discussing Force of Nature‘s uniqueness.

“On trials, we recorded fuel consumption that is about 20 per cent less than on other recent lobster vessels of the same hullform,” commented Dongara Marine’s Rohan Warr. “That resulted from careful planning by all involved – not least the vessel designer Southerly – to ensure alignment between cruise speed and maximum engine efficiency but also a range of construction refinements and other tweaks that we implemented.”

Warr mentioned another favourable development, which is the positive response from other fishermen and other experienced professional vessel operators who have seen the boat since it entered service. The company noted that observers were particularly impressed with the quality of construction.

“The fact that they were wowed by the quality and our attention to detail is really heartening for us as boatbuilders,” he told Baird Maritime.

Impressive as Force of Nature already is, though, both Southerly Designs and Dongara Marine concede that keeping with line with local regulations continues to pose challenges as far as vessel design and construction are concerned.

“It’s a constant battle to keep on top of the latest developments from AMSA,” commented Taylor. “The treatment of various sections of the rules is constantly evolving and does impact design solutions for a number of elements.”

He remarked that cost and environmental impact are both increasing with regard to their impact on vessel efficiency.

“Both are big drivers across a number of marine sectors, along with an accelerating interest in and uptake of alternative propulsion systems, electric, hybrid, hydrogen, etc.  This field is constantly and rapidly evolving as system technology improves and operators gain a greater appreciation of the various limitations and constraints of different systems and look for the various operation niches in which these systems can be employed.”

“Current developments in the lobster industry,” Southerly said, “such as the effects of Covid-19 and the ongoing trade difficulties with China, probably make it unlikely that lobster boats will be a big part of out business for a few years – we have been there before. In the meantime, we will still be providing necessary consulting services as required to numerous fishing clients with re-worked stability books and/modifications.”

Dongara Marine meanwhile, believes newbuilding activity in Australia’s lobster boat market will return to its earlier favourable levels, though it will likely be driven by replacement of existing vessels and not by expansions of operators’ respective fleets. Also, the focus will continue to be on providing high-grade product for premium markets as well as more sustainable ways of fishing.

“For the boats we build, that means being designed and equipped to catch and deliver fish to very high quality standards as befits a premium product. So that means, especially, being designed and equipped to protect the catch once it is onboard – meaning high grade holding (and where relevant, processing) systems. Of course the boat itself must also support that, for example, by providing seakeeping performance that protects the catch from damage through contact with holds, etc.”

Warr said that, for commercial success in fisheries where the total catch is limited, it also means being able to catch fish and deliver them to market when the best prices are available. The emphasis is thus placed on boats that can operate reliably, can fish successfully in a wide range of sea conditions, and are able to hold catch in great condition.

“We see that as translating to generally larger boats for a given application, and/or other methods such as motion control and hullform development to increase the size of operating envelopes. It also puts an emphasis on high quality systems and good hold capacity.”

Safety will continue to be a key concern, Dongara Marine claimed, as getting the next generation of fishers on board the new vessels will almost certainly require greater habitability and other onboard comforts, particularly for extended duration trips. This is especially true now that occupational health and safety regulations are getting more stringent.

Another reality slowly taking shape as observed by Dongara Marine is increasing asset utilisation. With catches likely to be continually restricted in volumes and/or fishing duration, being able to increase asset utilisation is also regarded as being increasingly important to fishermen. This then leads to the development of boats that can fish multiple fisheries, use other fishing styles, or even perform other work such as general workboat or charter duties whenever fishing is in its “off season”.

Still, the builder said there would continue to be key improvements in the area of vessel capacity. This does not necessarily mean boats will be significantly larger; rather, boats will be larger on average. For example, Force of Nature, at 22.4 metres LOA and with an 84-basket live capacity, is quite a bit longer than the 17.1-metre boat it replaced, which Dongara Marine has claimed can hold 64 baskets.

“When that older boat was built in 1994, it was pretty much the average size crayboat, perhaps slightly above average if anything,” said Warr. In the 1990s only a handful of new boats, maybe one in every 20, were over 21 metres long. In recent years that’s the average size for new Australian high-speed lobster boats, and in fact it’s more like 22.9 metres for the Western Australian fishery.”

Southerly Designs added that new orders continue to come in from customers in the security, leisure, offshore, and pilotage sectors, which are among the first who are expected to receive a significant boost especially after the whole of Australia finally enters the post-Covid recovery phase.

“We are also exploring possibilities in areas where design considerations around infectious disease control have recently come to the fore,” said Taylor.

For Dongara Marine, Covid-19 affected business, but not overly so. The main impacts were in delays and increased lead times for the supply of equipment and materials, as well as the reduced ability for clients from outside Western Australia to visit the company’s yard.

“Fortunately,” Warr said, “our customers have been understanding of the effects of that on schedules, and have demonstrated their confidence in us by enabling us to proceed even though some have not been able to visit our facility as readily as they would have previously.

“The South Australian client for the new crayboat we are currently building is a prime example of this faith, which is so heartening for all of us at Dongara Marine. Due to Covid-19 related travel restrictions he wasn’t able to meet us in person, or visit our yard, prior to committing to the project. Later, since he had to quarantine for two weeks, he sacrificed three weeks of his time to come to the yard for a week of discussions.”

Dongara Marine noted that the customer left not knowing whether it would be practical for him to return before the boat was completed, trusting instead that the boat he wanted would be built without him being able to come and look for himself. The company said it is “very, very humbling” to have such faith placed in its abilities.

“It’s that kind of trust and commitment from clients that helps to keep us positive.”

Keeping positive has indeed enabled Dongara Marine to be, “as busy as we have ever been.” Significant newbuilding and refit/modification projects are underway, and those projects ensure the company has enough work into 2022.