Geraldton-based Dave Perham, a highly experienced operator from Australia’s Western Rock Lobster fishery, has taken delivery of a new lobster boat from Dongara Marine that was designed to have much lower fuel consumption than comparable vessels.

Completed in late April 2020, some 12 months after contracts were signed, Force of Nature is a 22.4-metre Southerly Designs monohull which combines an aluminium hull with a composite superstructure.

The new boat is an upgrade from Perham’s current vessel, the 17.1-metre Natural Selection, which was built for him by Sea Chrome Marine in 1994 and which Perham is selling to make way for Force of Nature. For example the live tank capacity for 84 baskets of lobsters is a considerable step up from Natural Selection’s 64 baskets.

“When Natural Selection was built it was pretty much the average size crayboat, perhaps slightly above average if anything,” said Dongara Marine Managing Director, Rohan Warr. “In the 1990s only a handful of new boats, maybe one in every 20, were over 70 feet. Now that’s the average size for new Australian high speed lobster boats, and in fact its more like 75 feet for the Western Australian fishery. So, while Force of Nature is quite a bit bigger than its predecessor it’s not overly large by recent standards.”

Dongara Marine was the prime contractor for the Force of Nature project, and decided that Peter Ellis’s boat builders in Geraldton would fabricate the hull structure.

Once the bare hull was trucked to Port Denison, the Dongara Marine team set to work fitting it out, including all the main machinery as well as the many mechanical, hydraulic and electrical systems that go in to a modern, high-speed lobster boat.

Dongara Marine also manufactured the boat’s resin-infused composite wheelhouse and then bonded it to the hull, and completed all the interior and exterior fitout, including painting.

Onboard facilities meet the AL36-72 specifications in Australia’s National Standard for Commercial Vessels (NSCV), enabling the vessel to remain at sea with seven people onboard for up to three days. This entails equipping Force of Nature with features that are not required at the lower survey standard of a typical day/overnight boat.

Included within the crew accommodation, which is temperature controlled throughout, are three dedicated sleeping compartments totalling seven berths, including one queen size bed. While on some vessels personnel may have to pass through cabins to reach machinery or tanks spaces, on Force of Nature this is not necessary. This helps to enhance the ability to rest.

The composite wheelhouse has the helm station aft on the port side, with the galley plus a mess area that exceeds survey seating requirements to starboard. A self-contained shower and head compartment is located on the work deck immediately aft of the wheelhouse and adjacent to the flybridge access.

On Force of Nature, twin 662kW (900hp) main engines at 2,300 rpm each drive a fixed pitch propeller via a ZF gearbox. On trials this combination gave the fishing boat a maximum speed of 24.5 knots and 18.5 knots cruise speed, each about 1.5 knots above expectations. This performance was achieved with the boat’s 7,500-litre fuel tanks full.

While Force of Nature is by no means slow, having worked the Western Rock Lobster fishery for more than 40 seasons, Dave Perham considers reliability and economy more important than speed.

“I’m not the kind of skipper that runs at wide open throttle,” he said. “What’s important to me is knowing I can rely on the boat, and the engines, to be ready to fish whenever the market conditions are right.” 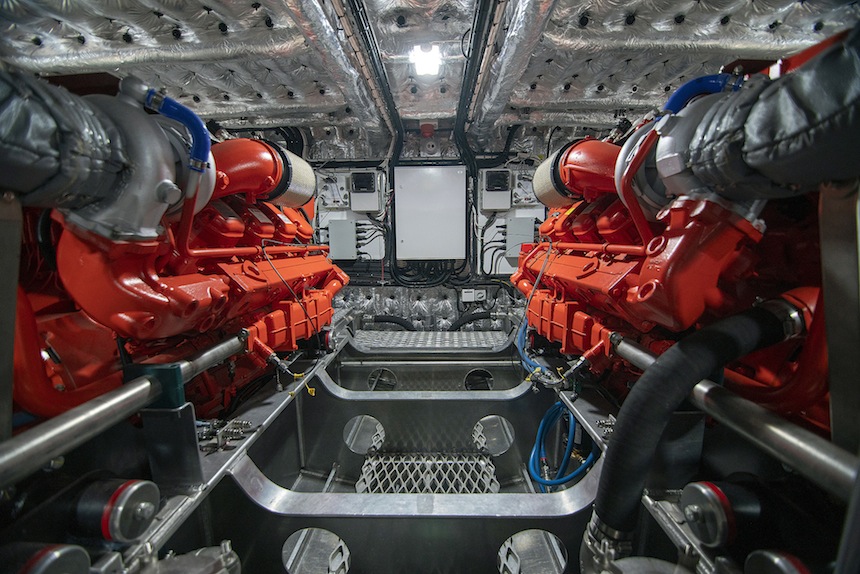 The choice of engine rating reflects this: while the engines are available with higher output, those on Force of Nature are at a rating that enables unlimited operating hours per year.

“With Force of Nature we are seeing fuel consumption that is about 20 per cent less than on other recent vessels with the same hullform,” Warr explained.

“That benefit is not just from the engines. We’ve put in place a range of other tweaks that improve the owner’s bottom line as well.”

Force of Nature’s design incorporates a pronounced flare at the bow, a fine entry, large deadrise angle forward, twin large skegs, and twin pintle rudders. In addition to reducing roll and improving course-keeping, the skegs provide full protection to the propellers from bottom contact and also reduce the likelihood of entangling ropes in the props.

More news, opinion and vessel reviews in this month’s Fishing and Aquaculture Week 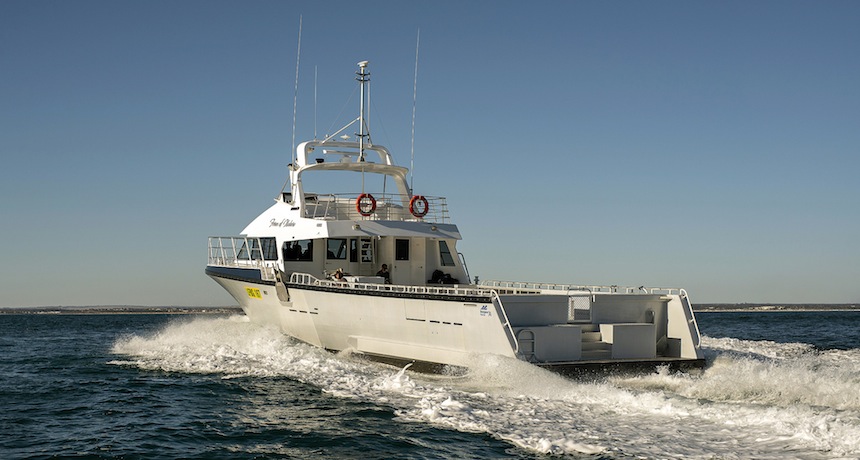 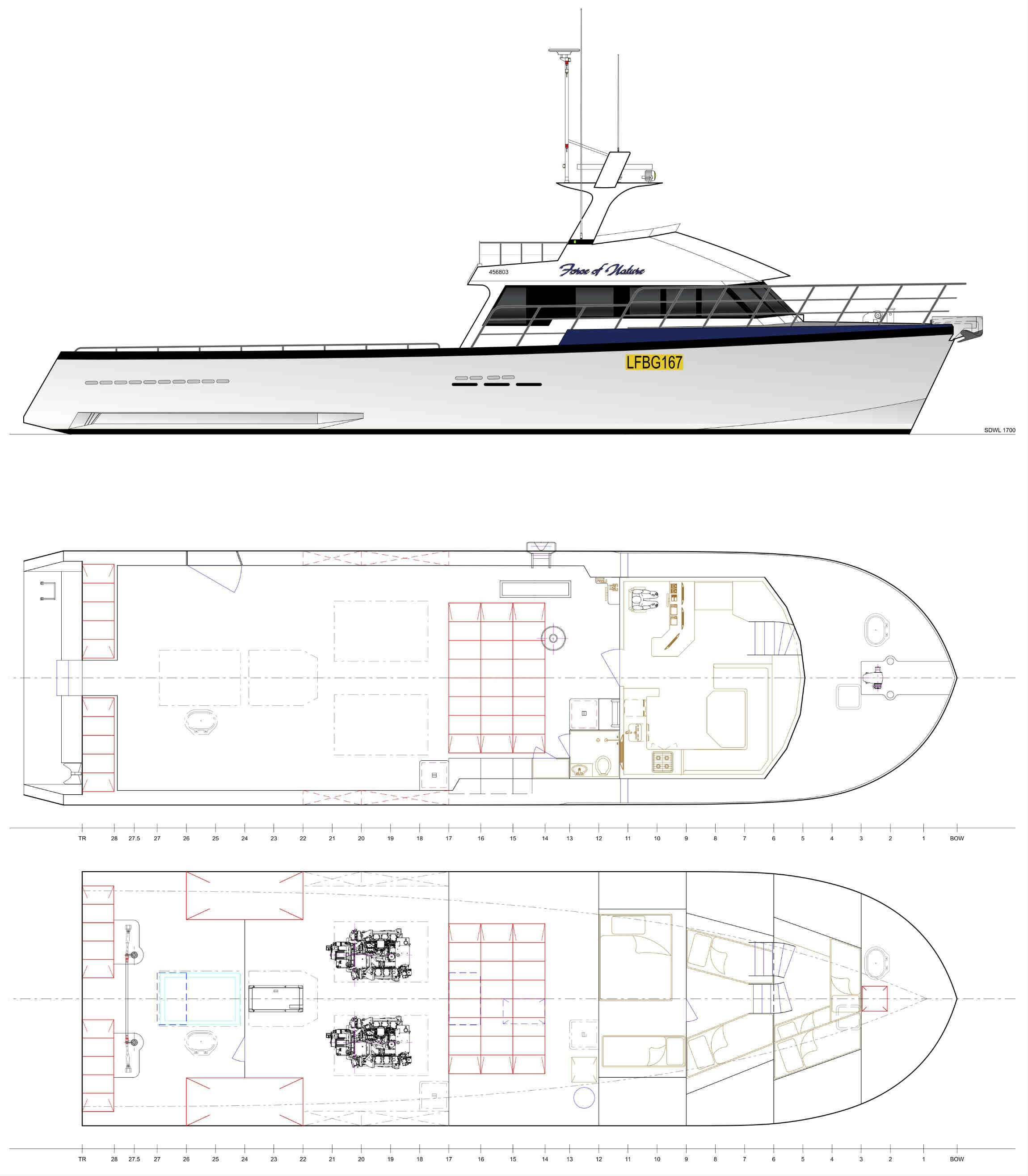