Harvey, Louisiana-based operator L&L Marine Transportation recently welcomed a new vessel to its fleet of towboats built for sailings along the Mississippi River and the Harvey Canal.

Designed by naval architects Entech Designs of Louisiana and built by Rodriguez Shipbuilding of Coden, Alabama, Amelia Ray is a twin-screw towboat purpose-built for the transportation of petrochemicals along all inland and coastal waters in the southern states of the US.

The vessel, which is named after the four-year-old granddaughter of L&L Marine owner Lee LeBoeuf, has since been put to use along with the company’s four other towboats, running petrochemical products along the Mississippi River between Houston, Texas, and Baton Rouge, Louisiana.

Amelia Ray has a length of 65 feet (19.8 metres), a beam of 28 feet (8.5 metres), and a draught of eight feet (2.4 metres). Onboard accommodations include four cabins, a galley, and two toilets with showers.

“Lee LeBoeuf was involved in the design and layout with Entech, which helped ensure the vessel would meet his needs,” Joseph Rodriguez, owner of Rodriguez Shipbuilding, explained to Baird Maritime. “Although she was heavily built, we found her to plate up quite easily due to her long smooth transition lines.”

The builder said the vessel’s owner opted for two Mitsubishi S6R2 six-cylinder main diesel engines, each with a rated output of 803 hp (598 kW) at 1,400 rpm, due to their being all-mechanical and compliant with EPA Tier III regulations.

Most of the vessel’s electronics were supplied by Furuno. Among the electronics is a pilot alert system custom-designed by Furuno in collaboration with L&L Marine. 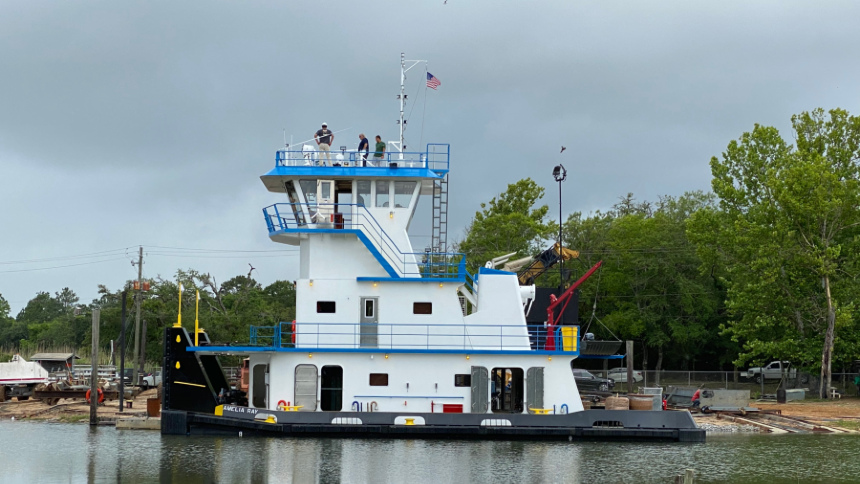