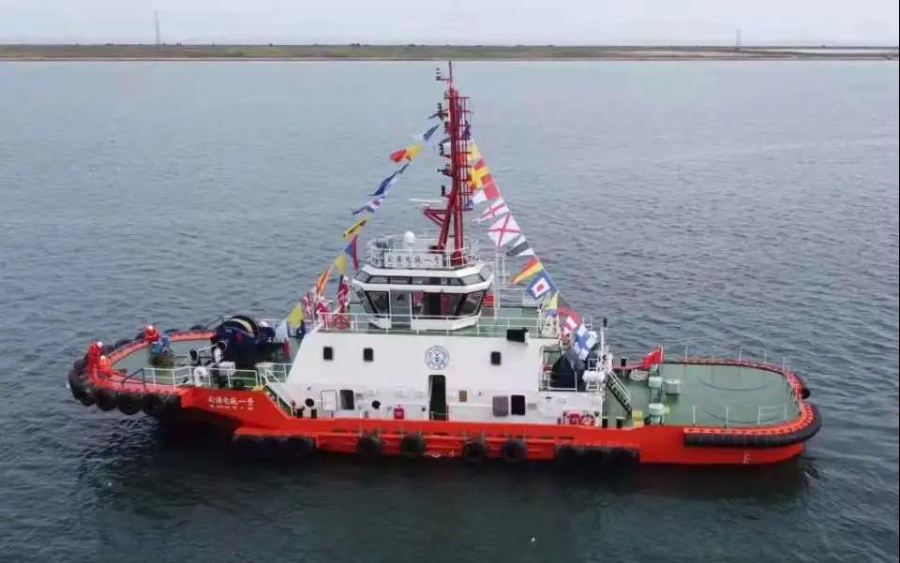 The first all-electric tug to be built in China was recently handed over to its new owners.

Yungang Diantuo No 1 (“Yungang Electric Tug No 1”) was built by the Lianyungang Port Holding Group for its own use, and the vessel has been undergoing operational tests at the Port of Lianyugang in Jiangsu province since shortly after its delivery. The tug was built specifically for operation at the Port of Lianyugang, a high-traffic international facility that is being developed as one of the first low-carbon ports in the country.

Design work on the new tug was done in compliance to China Classification Society (CCS) rules and provided by China State Shipbuilding Corporation (CSSC) via its marine engineering subsidiary 708 Research Institute. The 712 Research Institute, another engineering subsidiary of CSSC, provided the vessel’s batteries, the DC power distribution system, the permanent magnet (PM) motors, and the other key components of the electric propulsion system.

Yungang Diantuo No 1 has a length of 35.5 metres, a beam of 10 metres, a maximum draught of 3.5 metres, and a lithium-ion phosphate battery pack with a total rated output of 5,000 kWh and that can be fully charged in as little as two hours. A full charge of the batteries will enable the tug to operate for up to eight hours.

The batteries supply power to a pair of 2MW PM motors to propel the tug to speeds in excess of 13 knots and deliver a bollard pull of 48 tonnes, which the owner has claimed to be equivalent performance parameters to those of conventionally-fuelled tugs that have a total installed power of 4,000 hp (2,982 kW).

The batteries also generate significantly reduced noise and vibration and ensure greater safety compared to tugs that operate on more conventional marine fuels such as diesel and LNG, hence making the new tug suitable for navigating in the controlled coastal and harbour areas throughout Jiangsu province.

Accommodations are available for a crew of three, which is standard for a tug of this size.

Yungang Diantuo No 1 was handed over in mid-August of this year and officially commenced operations within the same month, serving the many international and domestic dry cargo vessels, containerships, and LNG carriers that regularly sail in and out of one of the busiest mineral cargo handling ports in north-eastern China. The Lianyungang Port Holding Group expects that the new tug can help reduce CO2 emissions and SOx emissions by as much as 900 tonnes and 12 tonnes, respectively – the equivalent total emissions of 400 cars – each year.