Designed by Canadian naval architects Robert Allan Ltd (RAL), Jin Gang Lun 31 and Jin Gang Lun 32 will be used to transport pilots in rough sea conditions in Bohai Bay and to provide ship berthing, unberthing, and coastal towing in the areas falling within the jurisdiction of the Tianjin Port authority. The vessels may also provide icebreaking assistance in the estuaries of nearby rivers.

The tugs are the very first towing vessels to be awarded the China Classification Society’s (CCS) notation of “i-Ship”, with sub-notations of “N” for intelligent navigation, “M” for intelligent machinery space, “E” for intelligent energy management, and “I” for intelligent integral platform. RAL said the vessels were designed to operate in a safer, more efficient, and more environment-friendly manner due to the improved automation system and better operational data collection and analysis, all of which are turned into enhanced operational guidance for Tianjin Port’s entire fleet.

Each vessel has an LOA of 40 metres, a moulded beam of 11 metres, a moulded depth of 5.12 metres, a maximum draught of 3.86 metres, a bollard pull of 36 tonnes, and a free running speed of 14.48 knots. The propulsion arrangement consists of two diesel engines that deliver a combined output of 2,400 kW at 1,000 rpm and two Kongsberg Maritime US155P14 controllable-pitch propellers mounted on Z-drives.

The vessels have been designed to the highest standards of outfitting for an operating crew of up to ten personnel. The master’s cabin is on the main deck along with a spacious mess, a well-equipped galley, a pilot room that can comfortably accommodate four seated personnel, and a common washroom. There are five single cabins, including the chief engineer’s cabin, and two double crew cabins on the lower accommodation deck.

The tugs also meet the new requirement of the Chinese Maritime Safety Administration (CMSA) regarding the design of crew cabins.

RAL said that operational safety was given the highest priority in developing the design. Watertight bulkheads are arranged so that even if the largest compartment on each tug is flooded, the vessel will remain afloat with a dry main deck. Design effort was made to achieve good hydrodynamic and seakeeping performance. The wheelhouse was also designed to maximise visibility for the master.

A pilot boarding system was carefully designed with significant input from the owner and the pilot station personnel. The cooling system has been improved over previous vessels based on the owner’s experience and on input from the supplier of the main engines.

The tugs have been outfitted for safe and efficient performance of ship assist and harbour towing. The deck machinery comprises a Karmoy hydraulic hawser winch spooled with 180 metres of line on the drum and a pair of independent Karmoy hydraulic windlasses on the bow. A towing hook is provided on aft deck.

The electrical plant consists of three identical Cummins diesel generator sets, each with a power output of 150 ekW. 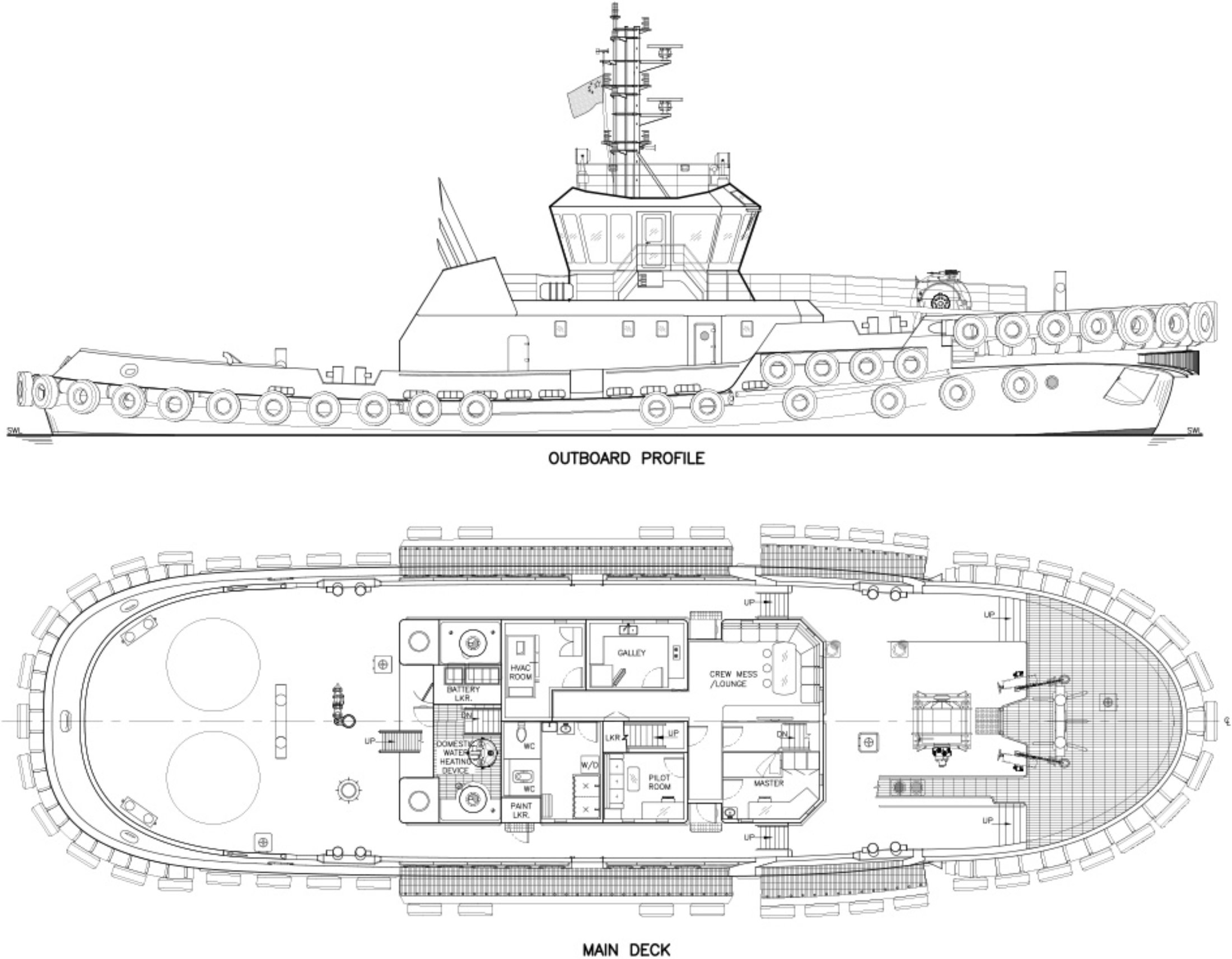