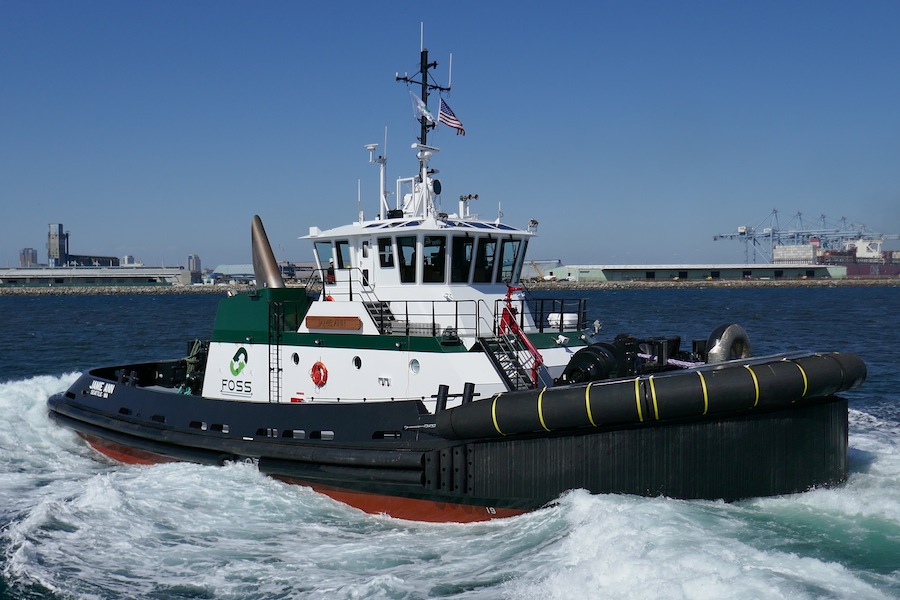 The Jamie Ann, the first of four new tugs constructed by Nichols Brothers Boat Builders for the Saltchuk family of companies, has arrived in her new homeport of Long Beach.

Powerful enough to escort the largest tankers and container ships calling on ports on the US West Coast, Jamie Ann will serve Foss Maritime’s customers in the Ports of LA/Long Beach area.

“There is an increased need for larger tugs capable of safely escorting the massive containerships and tankers calling on US ports today,” Janic Trepanier, Foss Maritime Project Manager told Baird Maritime. “Bigger ships require an increased bollard pull, that and the increased environmental requirements in the ports of California were the basis of the new build program.”

Two of the tugs will be stationed in Los Angeles/Long Beach, and the other two will be in San Francisco Bay. Their daily duties will primarily be to provide escort and assist services to the large tankers and container ships calling on the ports.

“The existing Foss fleet is currently able to service all of our customer’s needs,” added Trepanier, “but with new terminal requirements for higher horsepower and bollard pull tugs, along with some container ships now requiring four tugs to dock, Foss decided to grow and modernise our fleet with a more powerful tug that also meets the stringent California emissions standards.”

Along with her 6,866 horsepower (5,120 kilowatts), the Jamie Ann was built to the most stringent emission standards. Her two MTU Tier 4 engines meet the US EPA’s highest standards, reducing particulate and nitrogen oxide emissions to near zero through a selective catalytic reduction system.

The tugs are equipped with two MTU Series 4000 Tier 4 main engines paired with Kongsberg US255 Z-drives, which enable Jamie Ann to easily exceed 90 short tons (82 tonnes) on both the ahead and astern bollard pull. Both the MTU and Kongsberg systems are closely monitored through a condition monitoring system. 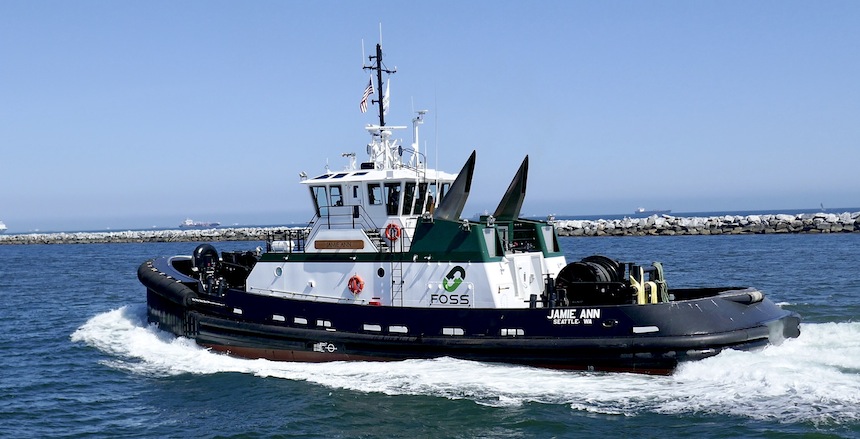 The vessel’s upgraded safety features are equally impressive and focus on crew safety on deck, winch operations and sound abatement in the engine room and staterooms. She also features a tow winch, improved wheelhouse visibility and lower maintenance costs.

The Jamie Ann can perform offshore rescue towing operations. A large double drum Markey towing winch was installed on the aft deck with a capacity of 2,600 feet (790 metres) of 2.25-inch (5.7 cm) wire and 440 feet (134 metres) of seven-inch (18 cm) Samson Amsteel Blue. Jamie Ann is outfitted with an anchor pocket and a Coastal Marine Equipment anchor windlass.

The electronics setup is standard to the Foss fleet and designed to ensure that the vessel and crew are operating within the most efficient and safe conditions.

The crew comfort and safety were at the forefront during the construction process. Foss increased the acoustic insulation in the engine room; added an acoustic enclosure on the hotel generator; included built-in bulwark doors on port and starboard for man overboard retrieval and safer boarding; and all winch controls are located in the pilothouse.

Foss also increased the fuel capacity to 72,500 gallons (275 cubic metres), which allows Jamie Ann to perform the offshore rescue towing. She is also outfitted with a 900 gallon/minute (3,400 litres/minute) fire monitor.

Jamie Ann’s three sisters, the Sarah Averick, Leisa Florence, and Rachael Allen, are due for delivery later this year.