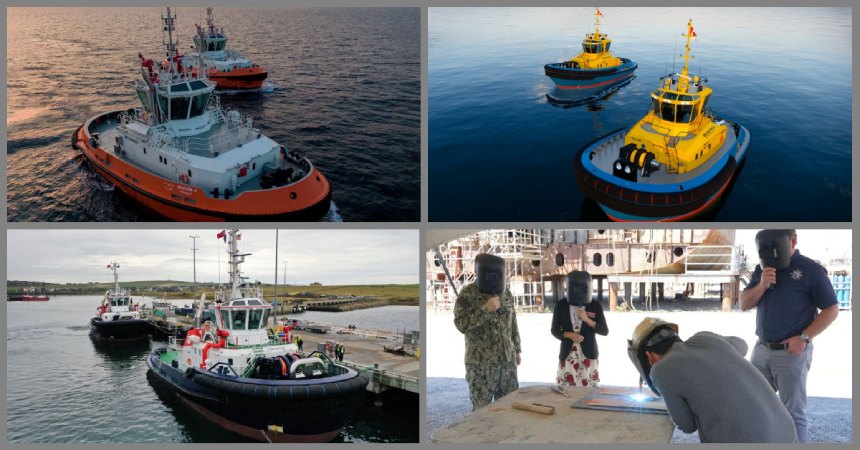 Tug deliveries have been completed to Kuwait’s Shuwaikh Port and the Orkney Islands as construction is underway on a future salvage and rescue ship for the US Navy. A Chile-based owner unveils plans to expand its Canada towage fleet with two electric-powered vessels.

The Orkney Islands Council of Scotland will soon take delivery of the third tug in a series that it ordered from Sanmar Shipyards of Turkey.

Designed by Robert Allan Ltd, Freyja of Scapa is a sister of Thor of Scapa and Odin of Scapa (pictured), which were delivered by Sanmar in 2020. All three tugs will replace vessels that have been providing towage services for the islands for over 30 years.

Freyja of Scapa will be officially named following its arrival in Scotland.

UAE-based Grandweld Shipyards has delivered four new tugs in a series to Specialities Construction for General Trading and Contracting Company, a marine services company that operates out of Shuwaikh Port on Kuwait’s Persian Gulf coast.

The Robert Allan Ltd-designed Ghanim-1, Ghanim-2, Ghanim-3, and Ghanim-4 each have an LOA of 27.5 metres, a moulded beam of 11.5 metres, and a maximum draught of 5.75 metres. Two Caterpillar 3512C 1,678kW main engines drive Kongsberg US205S thrusters to deliver a bollard pull in excess of 50 tonnes.

The tugs will be used for duties including ship assist, escort, towing, firefighting, and pollution response.

Named for the Saginaw Chippewa Tribe, the vessel honours the original people of the modern day state of Michigan.

The T-ATS’ duties will also include oil spill response and humanitarian assistance.

Each tug will have a length of 23 metres and a total installed battery power of 3,616 kWh delivering a bollard pull of 70 tonnes.

The tugs will be operated by Saam Towage Canada following their delivery in 2023.