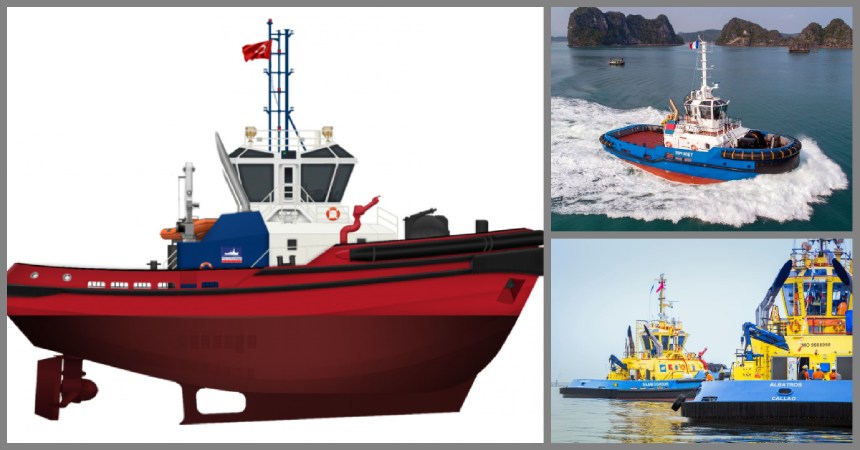 Newbuild deliveries have been completed to France and Peru while orders have been placed for two hybrid tugs for operation in China and Japan and a conventionally-powered tug for Libya.

TSM Odet measures 28 metres long and is powered by Caterpillar main engines that deliver a bollard pull of 60 tonnes. The tug also features firefighting equipment and a deck crane.

Sanmar Shipyards of Turkey has completed the delivery voyage of a new tug ordered by Saam Towage for operations in Peru.

Saam Condor also has firefighting equipment including a pump driven by the port side main engine and with a capacity of 2,700 cubic metres per hour.

Master Boat Builders of Coden, Alabama, has been contracted to build a new tug for Houston, Texas-based Suderman and Young Towing Company.

The RAL-designed vessel will be the fourth tug newbuilding for Suderman and Young in Master Boat Builders’ current orderbook. Three other tugs of a different series are under construction at the company’s Coden facilities.

China State Shipbuilding Corporation (CSSC) has been awarded a contract to build a new hybrid tug for operation out of Ningbo Port.

The tug will have an intelligent DC power distribution and drive system and propellers driven by permanent magnets. The total installed power will be 3,728 kW.

The vessel will be capable of sailing in both coastal and inland waters.

The Misurata Free Zone of Libya has awarded Turkish shipbuilder Med Marine a contract for a new escort tug.

Designed by Robert Allan Ltd, the tug will measure 28.4 metres long and will be crewed by eight personnel. It will be capable of a bollard pull of 85 tonnes and a free running speed of 12 knots.

The tug will draw power from a large lithium-ion battery with shore charging capability.

Deployment is scheduled to commence in the first half of 2025. It will be operated in the Seto Inland Sea off Tokuyama in Yamaguchi prefecture.