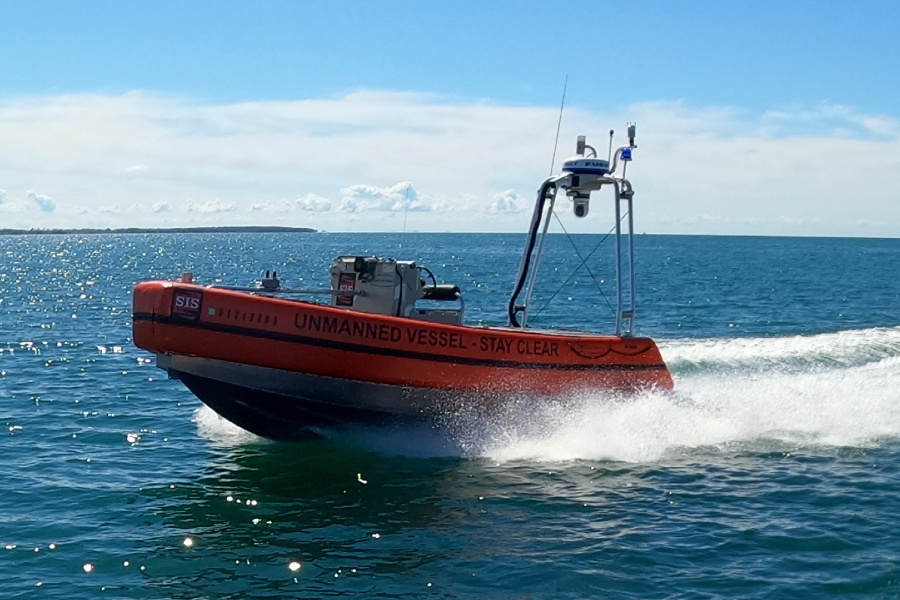 MetalCraft Marine of Watertown, New York, has introduced a new high-speed autonomous surface vehicle (ASV) designed for long-endurance patrol, surveillance, and interception missions. The 22- by 8.5-foot (6.7- by 2.5-metre) aluminium craft, aptly named The Watcher, is designed to be capable of fully autonomous operation but may also be remotely controlled via line-of-sight or satellite communications from shore or from a vessel of opportunity.

The craft can operate under full autonomous mode for up to 30 days and even features cameras and sensors that are designed to detect and interdict intruders and to prevent tampering. These and other onboard sensors draw power from a battery bank that in turn draws power from an array of solar panels.

The interceptor ASV is powered by a trio of Volvo D3 inboard diesel engines, each with a rated output of 220 hp (164 kW). It can sail for up to 1,800 nautical miles in between refuelings and can be launched and recovered by ship, shore, or air. The vessel may also be disassembled to allow all its components to fit within a standard 20-foot container as another transport option.

Originally developed as a prototype, the ASV itself has already undergone extensive testing by the US Coast Guard and unmanned systems specialist Spatial Integrated Systems (SIS, now a division under shipbuilder Huntington Ingalls Industries) late last year along with unmanned vessels provided by other manufacturers.

The focus of the tests – which were carried out over a period of 30 days in the waters off Oahu, Hawaii – was to explore how current and emerging technologies might be used to enhance maritime domain awareness in remote regions. The tests also showed ways that commercially available unmanned vessels with assorted sensor capabilities might support the coast guard’s many missions ranging from search and rescue (SAR) to maritime law enforcement and environmental response and with an emphasis on detecting suspected illegal, unreported, and unregulated fishing activity.

The coast guard said MetalCraft’s unmanned interceptor was chosen for the tests as it was designed for operation in extreme conditions and it has already proven capable of being launched and recovered by the coast guard’s fleet of cutters, ensuring full compatibility with the service’s existing seagoing platforms. The ASV also possesses adequate onboard space for payloads that the coast guard said will also include systems that are currently being developed for future deployment.

The tests validated the ASV’s ability to detect seaborne threats from over one nautical mile away while providing hourly alerts to shore-based operators. Threat detection was accomplished with the aid of an onboard radar and an A-frame-mounted forward-looking infrared (FLIR) camera for capturing images that may be of interest to operators.

The coast guard had earlier confirmed that it plans to acquire additional examples of the MetalCraft interceptor ASV to be operated as daughter craft to expand the search, patrol, and interdiction coverage of its larger patrol vessels.