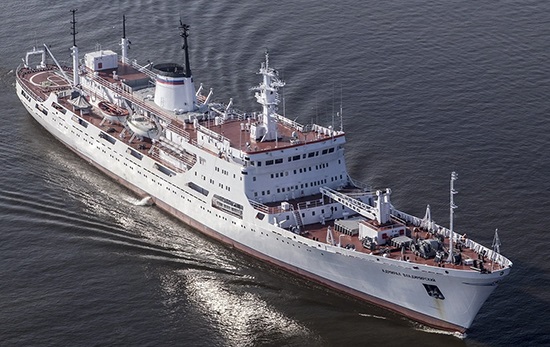 The voyage brought the vessel to Lisbon, Rio de Janeiro, Montevideo, Bellingshausen station in Antarctica, West Antarctica, the South Pole, the central Indian ocean, the Seychelles, and the southern tip of Africa.

During the expedition, the crew conducted hydrographic studies, making route soundings of depths, research using hydrological stations, hydrometeorological surveys, and measurements to determine the exact coordinates of the earth’s South magnetic pole, which are displaced by several kilometres per year. Also, ground surveys, experimental magnetic surveys, and geophysical work were carried out along the route.

The route was planned in such a way that, on January 28, 2020, Admiral Vladimirsky arrived at Russia’s Bellingshausen station in Antarctica to celebrate the 200th anniversary of the discovery of the continent by Russian naval officers and explorers Fabian Gottlieb von Bellingshausen and Mikhail Lazarev.

Admiral Vladimirsky is currently en route to its home port at Leningrad Naval Base for routine maintenance.