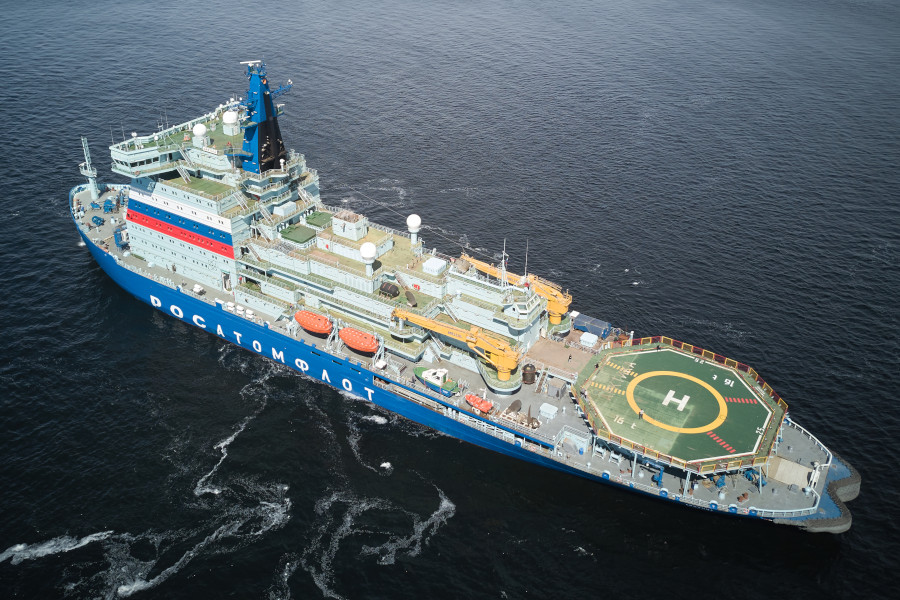 Saint Petersburg-based Baltic Shipyard, one of the many shipbuilding divisions of Russia’s state-owned United Shipbuilding Corporation (USC), has delivered the nuclear-powered icebreaker Arktika to local nuclear energy company Rosatom. The vessel is the first in a new series of five icebreakers under Project 22220 or the Arktika-class, which were developed to replace an earlier similarly named class of nuclear-powered icebreakers originally built from 1971 to 2007.

The newer Arktika – as well as its sisters, which are currently in various stages of construction – is the result of a two-decades-long effort by the Russian government to fully modernise the country’s fleet of nuclear-powered icebreakers. The six vessels of the earlier Arktika-class had been developed primarily using 1960s technology, though all but one of the ships in this class were still in service by the turn of the century.

It nonetheless became evident early on that a completely new and improved class of icebreaker was necessary to ensure that the country’s Northern Sea Route, a vital shipping lane that connects the Atlantic and Pacific Oceans, would remain navigable year-round for other ice-capable vessels. The lengthy development programme ultimately resulted in the Project 22220 ships, the first class of nuclear-powered icebreakers to be designed and built in Russia following the dissolution of the Soviet Union.

Arktika is perhaps best known for being the largest icebreaker in the world, boasting an LOA of 173.3 metres, a moulded beam of 34 metres, and a displacement of 33,530 tonnes at full load. The vessel has space for 54 crew and 21 other personnel as well as a helicopter deck with hangar.

One other notable attribute of the icebreaker is that its draught can be adjusted anywhere from 8.65 to 10.5 metres, enabling the vessel to navigate safely whether along the Northern Sea Route or on the many shallow estuaries found throughout the Arctic region. The adjustment of the draught is accomplished by the taking in and the discharge of ballast water.

As the largest vessel of its kind yet built, Arktika has the power to match. Specifically, the vessel is the first in the world to be fitted with the RITM-200 175MWt pressurised water reactors that operate on 20 per cent enriched Uranium-235 and that were developed by Rosatom’s Nizhny Novgorod-based subsidiary Afrikantov. The reactors have sufficient fuel for seven years of operations, ensuring fewer downtimes for refueling.

The RITM-200 reactors propel the massive icebreaker to speeds of up to 22 knots in the open sea and up to two knots in ice as thick as 2.8 metres. However, the vessel’s ice class notation, the highest ever to be assigned to any ship by the Russian Maritime Register of Shipping, means sailing is still possible even in four-metres-thick ice during the winter months.

As with the earlier nuclear-powered icebreakers that were also built in Russia, Arktika utilises a nuclear-turbo-electric powertrain arrangement wherein the turbogenerators run on the steam that is generated by the nuclear reactors. The vessel’s two Kirov-Energomash turbogenerators, each with an output of 36 MWe, then produce power for the 20MW electric motors that drive the vessel’s three 6.2-metre, four-bladed propellers.

Arktika was handed over to Rosatom upon completion of its delivery voyage from Saint Petersburg to Murmansk. During this same two-week voyage, additional tests were carried out, and the vessel was even able to reach the North Pole, achieving this feat on October 3. Before the end of the year, it is expected to begin icebreaking support for other vessels that sail along the Northern Sea Route, including the new generation of gas tankers that transport hydrocarbons from the fields offshore the Yamal and Gydan peninsulas to markets throughout the Asia-Pacific region.

Baltic Shipyard further claims Arktika has an expected service life of 40 years, even longer than those of its predecessors.