The all-aluminium newbuild is named Felix Sand in honour of a late physician and private donor who had helped the DGzRS raise funds for its purchase. It is the fifth vessel in a series to be built for the rescue charity and the second in the same series to be stationed in Schleswig-Holstein on Germany’s Baltic coast.

Built by local shipyard Fassmer to DNV HSDE “Rescue vessel” rules, Felix Sand has a displacement of 120 tonnes, a length of 27.9 metres, a beam of 6.2 metres, a draught of 1.95 metres, and space for four crewmembers. The vessel belongs to a series of SAR craft that are upgraded variants of an earlier 27.5-metre series that Fassmer had also supplied to the DGzRS. It also possesses self-righting ability, making it ideal for rescue missions even under extreme operating conditions in offshore waters.

The boat is powered by two MTU 16V2000 M72 diesel engines that each produce 1,440 kW at 2,250 rpm and turn fixed-pitch propellers to deliver a maximum speed of 24 knots. Although a cruising speed of 15 knots will enable the boat to sail up to 900 nautical miles, sailing at maximum speed will still yield an impressive range of 600 nautical miles, ensuring adequate endurance for conducting SAR missions far from shore.

A 75kW bow thruster provides additional manoeuvrability for berthing and unberthing as well as for operating safely alongside other vessels in distress.

The onboard equipment includes first aid gear, which will enable the boat to operate in a limited capacity as a sea ambulance, and a firefighting setup consisting of a pump with a flow rate of 4,000 litres per minute and a remotely controlled monitor. A towing hook is also fitted on the deck.

The crew spaces include four one-person cabins on the tweendeck and a main deck containing a galley, a mess, a laundry room, and toilets. All interior spaces feature air conditioning. Stores lockers are also available on both decks.

Felix Sand is capable of operating as a mothership for an 8.2-metre, self-righting rescue boat that was also built by Fassmer. The cabin-equipped daughter craft is named Saphir after a yacht that was owned by Dr Sand. The smaller boat, which is to be launched and recovered via a stern ramp, can operate independently of the mothership to further expand the DGzRS’ coverage within the Baltic Sea.

The Felix Sand–Saphir combination has since begun operating out of their home station in Schleswig-Holstein. The DGzRS said that, just two weeks prior to the boat’s formal naming ceremony in late August 2021, the two craft were utilised in the successful rescue of a family of six, including two small children, off the coast. 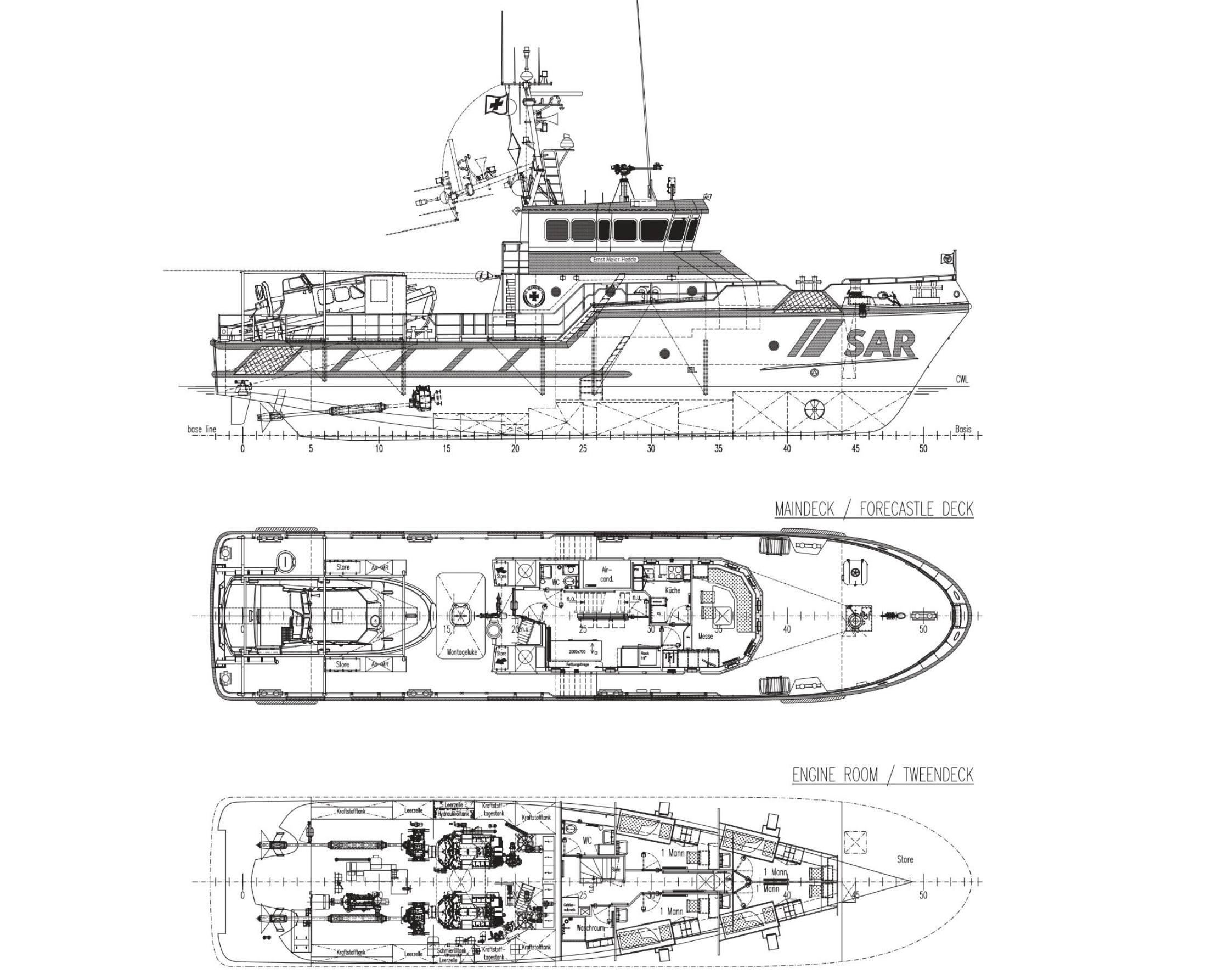