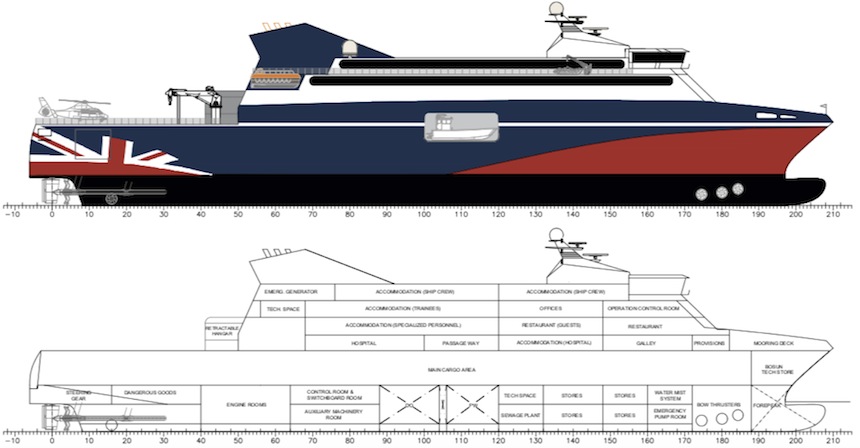 Cammell Laird has been selected to construct a multi-purpose disaster relief and training vessel under a project led by registered charity Britannia Maritime Aid (BMA).

The vessel, which was designed by Leadship for Cammell Laird and BMA, would be permanently based in the Caribbean, tasked with supporting disaster relief efforts and providing specialist training for UK and Commonwealth maritime officer cadets, rating apprentices, and trainees in trades associated with aid and reconstruction.

It will also be capable of serving as a commercial Ro-Pax ferry as opposed to being a one-off specialised vessel with limited applications.

Which are the key factors and/or events that drove BMA to call for the construction of a new purpose-built disaster relief ship of this size?

The UK has had a series of initiatives to resurrect our ship building industry and increase the number of UK Merchant Navy personnel. For some time we have lacked any commercial training vessel – so contributing to the plan by building one was an easy step. We have also offered spaces for cadets from the local Caribbean Maritime Training facilities.

We also considered the broader possible roles of such a vessel and given the recent history of problems in the Caribbean decided that a duel-purpose (training and HADR or humanitarian aid and disaster relief vessel) operated by BMA as a charity would appeal to the government and the maritime industry.

The secondary roles including beach cleanup, removing plastics from the ocean and scientific research as well as acting as a platform for British Industry exhibitions emerged as we thought it through in greater detail.

Are there any specific features or capabilities that BMA looked for in such a vessel? What dictated the choice of designer and shipbuilder?

The design selected is a standard vessel and the maximum size for the build site. This saves money (reduces design costs), [and] also means that if the project fails we can sell-on the ship as standard ferry.

Cammell Laird is a famous yard and one of the few in the UK that has remained active through these immensely difficult times for UK shipbuilding.

We noticed the helicopter pad and the ability to deploy and recover landing craft makes the BMA disaster relief ship closely resemble the landing platform docks (LPDs) or amphibious transport docks currently in service with some countries’ navies. Was it the intention to have the BMA ship patterned after such vessels? If so, why?

At an early stage it became obvious to those of us with a naval (as opposed to commercial) maritime background that a disaster relief ship needs to be able to operate in an area of devastation in which few facilities – specifically ports – may be operational. Therefore the ability to land people and equipment across a beach (like an LPD) is essential.

Originally we were to have dock built in – but this added huge costs and complexity and took approximately 30 per cent of the available volume so we went for the easy option – smaller landing craft on davits.

This vessel is a multi-role ship, so the landing craft also have more than one role, specifically acting independently as mini training ships to give a small team of embarked cadets (perhaps five or six) the opportunity to act as captain, navigator, engineer, chief officer, caterer etc. on a real, if rather spartan vessel.

From my experience in the Royal Navy I know that such experiences are challenging but fun ways of spending a few days in the Caribbean! They are also excellent ways of building experience and practical sea knowledge.

What dictated the need for the vessel to also serve as both a training ship and a Ro-Pax for commercial applications?

I think it unlikely that the HADR vessel will run as a Ro-Pax but the facility will be retained on a small scale. One of the companies involved in the project has been trying to establish a regular ferry service in the Caribbean for a long time. Everyone wants it and everyone thinks it a good idea but no-one is prepared to invest.

Perhaps we will start an occasional (but scheduled ) service between islands that have sufficient traffic to make it worthwhile. This will operate outside of the hurricane season and on a trial basis.

Not counting immediate sailings in response to disasters, what would be an expected regular operating cycle for the ship and its crew (including use as a commercial Ro-Pax to support trade)? How long would it take before it returns to its home port?

During the hurricane season, the HADR will always be within three days of Barbados – that covers a lot of the area of the Caribbean.

We anticipate that we will have significant warning of a significant storm or sequence of storms. Enough time to prepare for the outcome and be clear of danger ourselves so as to deliver assistance rather than deliver a wreck loaded with additional casualties!

For how long are the ship and its crew and first response personnel expected to stay in a disaster-hit community? Any minimum or maximum periods?

The ship will have an on-station endurance of about three to four weeks, dependent upon usage. The operational plan (in outline) has the vessel delivering people and vehicles ashore as well as establishing a field hospital and temporary tented accommodation for the working parties as well as the dispossessed.

Other services include feeding stations, potable water, containerised generation to restore some electrical supplies to useable but damaged surviving facilities, rebuilding where possible and in the slightly longer term a containerised set of temporary (but medium term) prefabricated housing for perhaps 120 families. 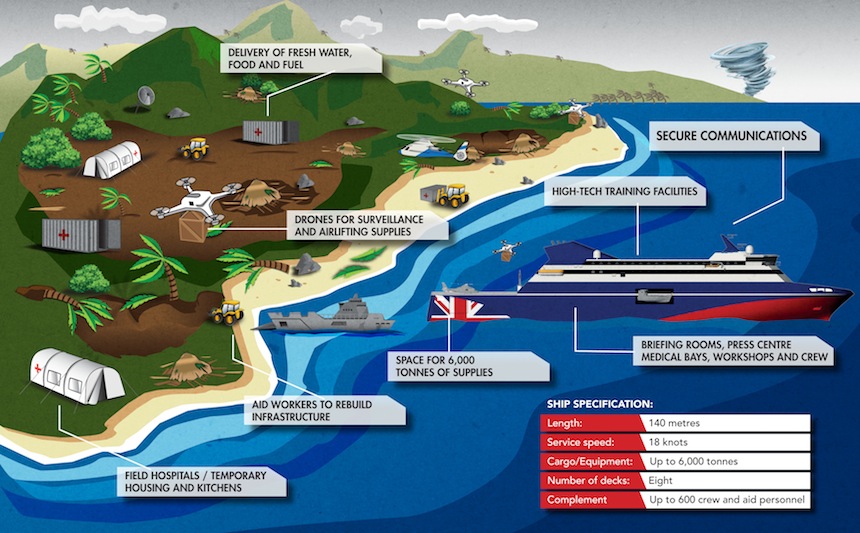 It will be up to the embarked team led by the captain supported by his planning team to decide the details and when to withdraw to embark fuel, additional personnel, vehicles and foodstuffs etc.

Remember the ship is likely to be part of a NATO- or USN-led task group and certain planning and coordination will be at a higher level. The ship may be sent by the regional command to be the sole vessel at a particular island or one of several dealing with one larger island or coastal area.

Flexibility in capability and tasking has been at the centre of our plans. Not least because it is very likely that we will be the first vessel on scene and a degree of self-sufficiency in planning etc. will be necessary.

We plan for our cadets to be on board for two to three months so longer deployments for HADR may well require cadet crew change as part of the planning.

Considering the ship’s size, one gets an idea that it is expected to simultaneously undertake a broad range of disaster relief tasks. Which specific tasks would be carried out by the crew and/or response personnel while the ship is in an affected community? What types of vehicles, equipment, and other materiel would be included in the ship’s cargo in order for it to perform those tasks?

I think the previous answer goes some way to answering this. The crew will be chiefly tasked with the training of the cadets, maintenance of the ship and planning for HADR.

Other roles include surveys of beaches (preparation for HADR), ocean and beach clean up (possibly with paying eco-vacationers embarked to assist) and at least one exercise outside the hurricane season.

There will also be a small party at the HQ in Barbados. The HADR teams from the UK and other countries will be embarked as soon as possible once a storm is in-bound – they are the HADR experts and will be put ashore on arrival on-scene.

[In terms of] vehicles, we are lucky to have the superb company JCB based not far from where I live in Derbyshire. We have already made approaches as they supply a broad range of suitable vehicles already used by the RN and RFA for amphibious beach assault and disaster relief.

In addition we will have trucks/tractors/trailers and several useful boats ready to go. The ship will have 10,000 cubic metres of volume put over to HADR stores plus RO plants and 1,000 tonnes of potable water.

We understand the ship will also be used to carry out marine environmental research. What type of research would the ship perform? Which onboard facilities and specialised equipment would it have to make such research possible?

We will have a single suitable compartment (room) configured for oceanographic research and the ability to tow sensors. This will be a secondary task and we expect research teams to book time with us for specific functions from fisheries to bottom surveys.

Their work will have to fit in with other tasking that will be carried out simultaneously – so some cooperation in planning and programming activity will be required.

Cadets will be able to pilot small boats for them as well as ferry them to/from islands. Clashes of programming are inevitable but should not be an issue if we all act like grownups!

Does BMA have any plans to operate other purpose-built vessels of similar class in future?

Once funding starts we anticipate the purchase and conversion of a suitable older vessel to act as a temporary interim vessel with fewer capabilities – it will not be a purpose built HADR ship.

This will prove the concept and allow the key role of training to start. If this works then the main ship’s success is assured and production will be funded. I think it almost certain that we will seek additional funding and manning for ships based elsewhere in the world once the concept is demonstrated.