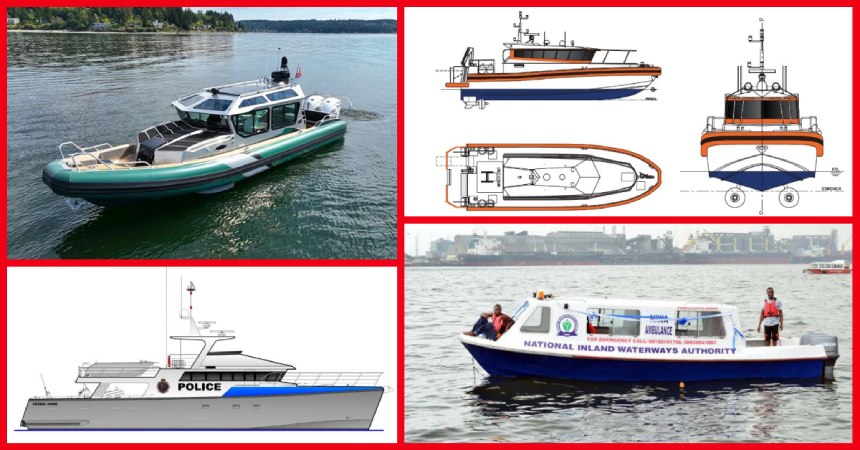 A new ambulance boat enters service in Nigerian inland waters as construction is underway on a new rescue craft in Croatia and a police patrol vessel for Tasmania in Australia. Upcoming newbuilding projects include a pollution response boat for the Philippines and a multi-role vessel for Port Canaveral in Florida.

The Nigerian government, through the National Inland Waterways Authority (NIWA), has begun operating a new ambulance boat in the waters of Lagos state following a recent spate of mishaps in the same region.

The boat is powered by two Yamaha outboard engines and is equipped with stretchers, first aid kits, and a communication system.

The vessel will also perform the secondary role of transporting patients with less urgent medical needs to better-equipped hospitals within Lagos.

The US Department of Homeland Security’s Federal Emergency Management Agency has awarded Port Security Grant Program funding of approximately US$$472,500 for the purchase of a new rapid response boat by the Canaveral Port Authority (CPA) of Port Canaveral in central Florida.

The vessel will be custom-built by Life Proof Boats of Bremerton, Washington. It will be operated by the Brevard County Sheriff’s Office on behalf of the CPA.

Equipment will also include those necessary for responding to CBRNE incidents.

The Tasmania Police in Australia is scheduled to take delivery of a newbuild aluminium offshore patrol vessel (OPV) in 2024.

The 23.9-metre boat will be built by Western Australia-based Fine Entry Marine to a design by Global Marine Design. It will be capable of operating even under adverse weather conditions day or night.

The South Korean government has pledged to supply a new litter-collecting vessel for use by the Philippine Coast Guard, the South Korean Embassy in Manila confirmed recently.

The vessel will be supplied as part of a US$7.7 million aid package that also includes the establishment of a marine litter monitoring system that covers Manila Bay.

The project will be implemented through the Korea International Cooperation Agency (KOICA).

Once completed, the aluminium monohull vessel will have an LOA of 15 metres, a beam of 4.7 metres, a maximum draught of 1.5 metres, and space for three crewmembers and 11 passengers. Two Volvo Penta 662kW engines will deliver a speed of 35 knots.

The deck equipment will include a crane and two electric capstans. A Volvo Penta DP system will also be installed.