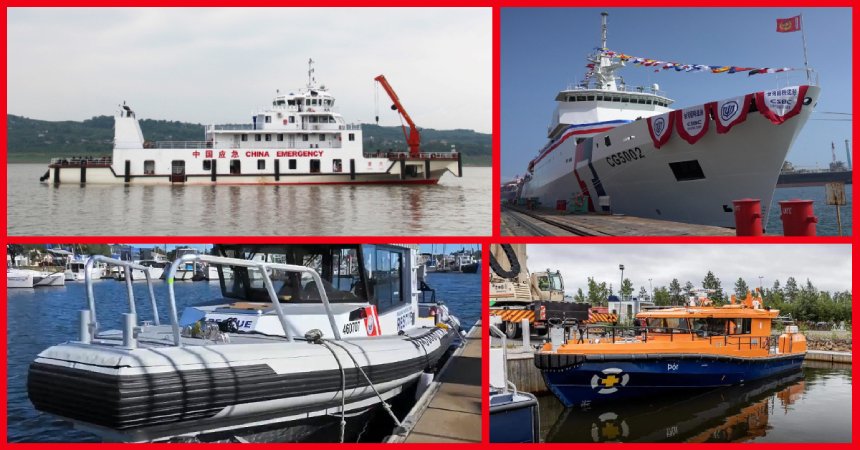 Emergency response vessels have been delivered to operators in Taiwan and mainland China while construction is nearly complete on two rescue boats for Iceland and New South Wales in Australia. An order has also been placed for 14 new police boats for operation in Libyan waters.

The CCS-classed Zhongguo Yingji Chongqing Hao (“China Emergency Chongqing”) has an LOA of 59.9 metres, a beam of 13 metres, a speed of just under 12 knots, and a range of 1,000 kilometres.

The vessel will take on salvage, search and rescue (SAR), towing, and disaster response missions in the Three Gorges Reservoir area and the upper portions of the Yangtze River.

The newbuild is the second in a planned series of four being built for the TCGA. Each vessel will have a maximum endurance of 10,000 nautical miles and three high-pressure water cannons for firefighting duties.

The vessel can also embark anti-submarine warfare (ASW) helicopters to augment the Republic of China Navy’s own ASW capability if needed.

Following delivery, the RIB will be assigned to the Botany Port Hacking NSW unit.

Finnish builder Kewatec Aluboat has launched the first in a series of three rescue craft ordered by the Icelandic Search and Rescue Association (ICE-SAR).

The 17-metre-long, self-righting boat is scheduled for delivery before the end of the summer of 2022 following completion of sea trials.

Construction of the three ICE-SAR vessels began in October 2021.

Italian builder B-Shiver has been selected by the Italian Ministry of Interior to supply a new fleet of 14 ocean-capable FRP patrol boats for use by the Libyan National Police.

The boats will each have a length of 12 metres and space for 12 passengers and crew. A speed of 40 knots can be achieved even under Sea State three conditions.

The builder will also provide familiarisation training for the crews who will operate the boats.