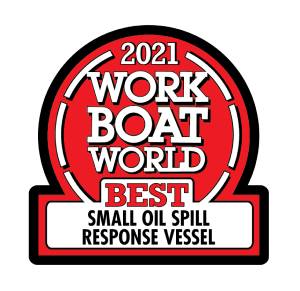 Spanish shipbuilder Aister designed and built two very capable oil spill response boats for the Panama Canal Authority (ACP). This is a real “feather in the cap” for Aister, as the ACP, with its massive canal toll revenues, can easily afford the best.

These boats are simple, strong and versatile, being able to do far more than just recovering oil spills. They have been designed and equipped to operate in the very trying equatorial jungle conditions of the canal’s environment.

“These are super compact waste collection boats,” Aister told Baird Maritime. “They offer a large waste storage capacity in a boat of a really reduced length. This length allows for better manoeuvrability in shallow waters where other waste collection vessels cannot reach.”

The builder added that the boats include the latest skimmer technology from popular manufacturer Lamor, and that the vessels themselves have been designed to offer their crews the greatest comfort in their operations, both in the cabin and on deck.

“We had to prepare the engineering in the engine room in great detail to be able to install all the equipment in such a narrow space,” said Aister, commenting on the main challenges it encountered during construction. “This was due to the rest of the vessel being dedicated to optimising the collection tanks.”

The company said it is also aware of the growing impact of environmental regulations, particularly CO2 emissions. As a result, it has begun working on boats with hybrid electric systems as well as other types of CO2-free propulsion.

The year 2021 was a fruitful one for Aister, which claimed that strong support by management has benefited shipbuilding activities and allowed the company to secure a number of key contracts that ensured work through to 2022.

“Our forecasts for the next three years are very optimistic,” the company told Baird Maritime. “We are hence positioning ourselves in the market as one of the major players with regards to aluminium workboats, hybrid electric boats, super high-speed craft, and the willingness to incorporate innovation.”

When asked about the current and future state of the marine pollution control industry, Aister indicated rising trends in the areas of hybrid electric propulsion and autonomous operations. In anticipation of growing customer demand for hybrid electric cleanup vessels, the company will soon begin building a trio of such craft for operation in some Spanish ports.

“We are also collaborating with our partner GMV, which has built a 12-metre-long, pure electric boat that operates in the Port of Oslo.”

Aister added that being at the forefront of technology is the one aspect that characterises the Spanish workboat industry.

“As an example, we at Aister are now building the world’s first interceptor boats that can sail at 60-plus knots via waterjet propulsion.”