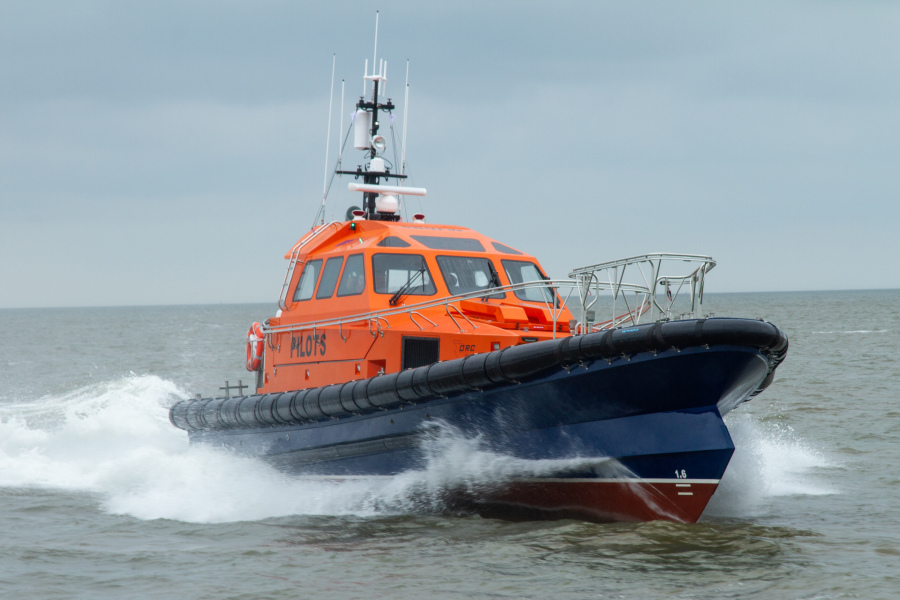 Associated British Ports (ABP) recently took delivery of the first of nine pilot boats ordered from Goodchild Marine Services of Norfolk. The nine boats, which all utilise a design developed by French naval architects Pantocarene, are to be delivered to ABP over the next five years under a £9 million (US$11.8 million) contract awarded in late 2020.

The newbuild has been named Ouse after a river in northeastern England. It is now operating out of the ABP-managed Port of Grimsby on the south bank of the Humber Estuary.

The boat has an LOA of 17.63 metres, a beam of 5.36 metres, a draught of 1.46 metres, and a lightship displacement of approximately 22 tonnes. There is space in the main cabin for a coxswain, a second crewmember who mainly performs the duties of a deckhand, and up to seven passengers/pilots.

The planing hull, which was built with emphasis on both strength and light weight, also boasts an innovative “beak bow” wave-piercing design that guarantees improved fuel efficiency as well as smoother navigation when sailing at high speeds in bad weather or when manoeuvring alongside and separating from ships to ensure safe pilot transfers. The bow design promises fuel consumption of 140 litres per hour when cruising at 25 knots while a total fuel capacity of approximately 2,500 litres will mean the boat can easily keep up with the demands of ABP’s daily operations in the busy Humber region.

Goodchild Marine said that Ouse is also the first UK-built and -operated pilot boat to be fitted with IMO Tier III-compliant engines complete with selective catalytic reduction (SCR). The main engines fitted on Ouse, as well as two of the eight remaining Goodchild-built ABP pilot boats under the same order, are two MAN D2676 LE425 diesels that each produce 478 kW to deliver a maximum speed in excess of 28 knots.

The engines are connected to a pair of Twin Disc MGX5136A gearboxes fitted with electronic controls and trim cylinders. These added features on the gearboxes provide the boat with improved station keeping as well as finer speed control.

The boat has also been equipped with an asset tracking and management system supplied by Applied Satellite Technology. The system provides near real-time performance metrics to allow the operators shoreside to view engine parameters, receive email alerts, and compare fleet vessels against each other, thus enabling more efficient vessel maintenance and management. Access to engine data, as supplied by the same system, will also help facilitate early preventive maintenance.

Many other features help improve the comfort and safety of those on board. A man overboard recovery platform is a standard fit on all Goodchild Marine pilot boats, while the air conditioning, suspension seating, and a resiliently mounted wheelhouse all act to reduce vibration, impact, and noise when at sea. These features all enable Ouse to easily manage the changing navigational conditions that occur in the Humber year-round.