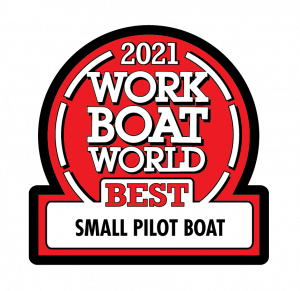 This practical and impressive little pilot launch built by Italy’s Cantiere Nautico Portegrandi (CNP) looks like a ruggedised version of the typical Venetian Lagoon water taxis and workboats that most tourists and locals are familiar with. They have to be small, nippy and low wash so as to cope with the relatively narrow canals and shallow water that prevails there.

This beautifully finished FRP pilot boat is indeed small but it is thoroughly in keeping with its area of operation in the World Heritage-listed Venice Lagoon. Strongly built, stylish and durable, the boat has been designed with a very efficient hull shape that ensures comfort and economy even at high speeds. The design would also make an excellent patrol and SAR boat for the lagoon.

It is also comfortable and comparatively spacious and will be a very valuable asset to maritime operations in that very special area.

“We believe P2‘s most noteworthy attributes are its spacious superstructure compared with its small dimensions, detailing similar to what is found on leisure boats, and improved safety and comfortable sailing thanks to cutting edge features and electronics,” CNP told Baird Maritime.

The builder claimed there was not much difficulty coming up with the vessel’s final appearance, as it used a proven hull that was designed by renowned naval architect Renato “Sonny” Levi. The company added that the vessel retained what has been regarded as the traditional layout of pilot boats in use in Venetian waters.

“Work on this design enriched our expertise as it was the first time for us to venture into this sector of shipbuilding, where by far substance matters more than appearance.”

CNP explained that the design work that went into P2 was partly driven by the need to minimise environmental impact in vessel operations, which the company identified as one current trend in shipbuilding.

“The need to safeguard the environment is of paramount importance in the workboat industry, and this also applies to the Venetian Lagoon environment. Preferences are now for less polluting engines. There are several solutions in the market, but safety and reliability must also be considered when selecting such an engine.”

To address this need, CNP fitted with the boat with FPT engines with low-maintenance SCR systems that will ensure compliance with regulations covering the reduction of particulate matter emissions. The company adds that the second generation engines in the series will require no re-design or layout changes should upgrading become necessary for compliance with stricter emissions standards, such as IMO Tier IV.

“Also, thanks to the optimised combustion feature, both performance and low consumption are confirmed while the incorporation of a maintenance free post-treatment system means lower operating costs and fewer unscheduled downtimes.”

“We made good use of the previous year by delivering two new workboats, including P2. We also performed upgrades on a coast guard patrol boat, a project that included the installation of newer engines. Among our ongoing projects is the refit of a 1960s-era steel tug and converting it into a yacht.”

The “staycation” approach of many of its local leisure customers, also resulted in additional work.

“We’ve been hit by delays and the rising costs of materials,” CNP told Baird Maritime, “and these increase the risk of us not making our deliveries on time. We hope this will soon be offset by an increase in demand.”

This increase in demand is one of the developments the company expects to occur as pilotage retains its place as a key part of navigational safety in the coming years.

“Public pilotage still confirms itself as a cornerstone of safety, as also repeatedly stated by European Union bodies. The efficiency and versatility of boats will remain the focus of the shipbuilding market. Also, following the latest agreements between shipowners and pilots, we note a constant request for adoption of boats with longer service lives.

As for the Italian workboat industry in general, CNP sees there are a lot of vessel fleets that need to be renovated.

“The issue of fleet renewal needs to be addressed while bearing in mind the overall lifecycle of materials – including their disposal – so as to minimise emissions.”