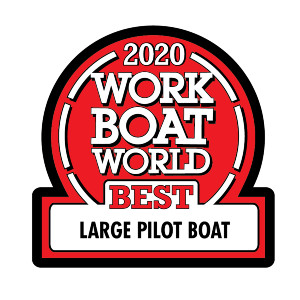 Even after 25 years of continual and significant refinement, these Camarc pilot boats remain clear sector leaders. The hull shape is now quite different yet they retain their classic Camarc good looks.

Ordered by Nederlands Loodswezen, the very experienced Dutch Pilot Association, these new generation boats, appropriately built by the aluminium experts at Next Generation Shipyards, are considerably more economical than their predecessors.

With their Humphree ride control, they are also more comfortable in the shallow rough seas where they will mostly work. Beautifully built, they are very well-equipped, fast, safe, comfortable and efficient.

“The design was an exercise in incremental improvements,” Camarc told Baird Maritime, “wherein an optimised structure design and equipment selection was accomplished to reduce weight without compromising the robustness and strength of the original series. This was then coupled with the latest version of our refined hull design, which has shown an increase in efficiency/speed over the classic model of some nine per cent in the hull alone.”

Camarc added that the combination of weight reduction and hull improvements have resulted in a significant reduction in fuel consumption of some 35 per cent over previous craft when sailing at regular operational transit speeds. Furthermore, Mira was fitted with a new IMO Tier III emissions system following successful in-service testing of this equipment.

“Mira shows what can be achieved by improving an already successful design and that when all parties – i.e. operator, designer, and builder – closely cooperate, fantastic results and improvements can be realised.”

“The challenge was to build a vessel within the limitations of the design parameters and to achieve a significantly lower fuel consumption without sacrificing functionality,” NG Shipyards added. “One of the goals was to keep the total weight low and the centre of gravity on the right spot with very small tolerance. The result of this was a 20 per cent lower fuel consumption and very low noise levels in a vessel that is also easy and comfortable to manoeuvre.”

Both Camarc and NG Shipyards have agreed that Mira was developed in response to vessel operators’ growing preference towards reduced emissions and improved efficiency. NG further pointed out that the decision was made to install an exhaust gas aftertreatment system on the newbuild well before stricter NOx emissions regulations were first enforced.

“Nowadays,” the builder told Baird Maritime, “sustainability is one of the most important issues in the world and also in shipbuilding. This applies not only to the use of vessels but also the way that vessels are produced.”

Hence, in addition to fitting Mira with an “add bleu” exhaust treatment system and embarking on a separate project that involves hydrogen fuel cell propulsion, NG has also incorporated features that it expects will help make its manufacturing processes more sustainable. The most notable of these features are solar panels fitted on the roofs of its shipyard assembly halls, and NG has claimed that these panels produce more energy per year than what the company consumes during the same period.

Camarc and NG are continuing to push ahead with these and other innovative projects despite the challenging year that was 2020. As a result, business became “steady” for Camarc while NG even experienced improved sales figures compared to earlier years.

“We saw a 30 per cent increase in turnover in 2020,” NG told Baird Maritime. “These were all specialist workboat newbuildings, and we expect that figures will grow even further in 2021.”

Even while working to keep their respective existing customers satisfied, both Camarc and NG are also devoting more attention and effort to recognising and understanding new trends that are shaping the future, particularly that of the pilot boat industry.

“We see the introduction of hybrid and alternative power becoming an increasing trend driven by improvements in the technology available and the desire of major ports in particular to reduce carbon footprint,” said Camarc. “We have already and will continue to investigate hybrid, pure electric and alternative fuel options for pilot boat operators.

Camarc, however, admitted that the particular challenge with pilot boats is that the majority of time is spent in high-speed transits with little time in between for refuelling or recharging.

NG meanwhile commented that the future of pilot boats will be characterised by improvements in hull shapes and “smarter” onboard systems aimed at reducing fuel consumption and making boats more cost-efficient.

“The next step,” NG added, “will be the use of hydrogen, bio-methanol, or ammonia in a fuel cell system for electric propulsion.”