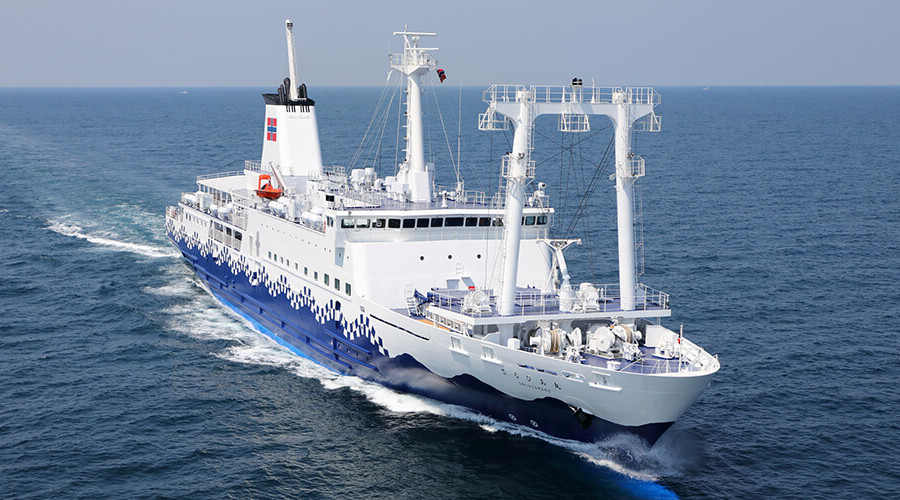 Named Salvia Maru, the 6,200GT newbuild sails on a regular scheduled route between Tokyo and the Bonin Islands approximately 1,000 kilometres away, as well as a number of other island chains in between the two main points. It is also being used for summer nighttime sightseeing tours within Tokyo Bay. The inter-island scheduled route is the same that had been served by the newbuild’s similarly named, 1992-built predecessor.

The newbuild has an LOA of 118.09 metres, a moulded beam of 17 metres, and a draught of 5.4 metres. It is capable of transporting up to 1,413 passengers, 41 crewmembers, and a total freight volume equivalent to that of 38 standard-size containers. A derrick crane has been installed to facilitate loading and unloading of container cargo, leaving the ramp for exclusive use by vehicles and other freight.

The passenger accommodations come in six different classes. The cabins in the special class and special first class sections even have en suite toilets with showers. The other amenities include a restaurant, a bar, and a live entertainment venue at the stern, which is open when the ferry sails on nighttime cruises of Tokyo Bay.

“The ferry was designed to be a ‘super eco ship’ (SES) similar to the Tokai Kisen-owned vessel Tachibana Maru,” Mitsubishi told Baird Maritime. “Among its key features are a reduced environmental load, improved manoeuvrability, and barrier-free interior spaces.”

The barrier-free interior means the ferry’s layout was designed to make it easier for passengers with limited mobility, such as the elderly and disabled individuals, to move about on board.

The host of features incorporated on Salvia Maru were in line with the owners’ requirement for a vessel with greatly improved turning performance, a high operating speed, greater passenger capacity and comfort, improved fuel efficiency, low levels of noise and vibration, and reduced maintenance requirements. 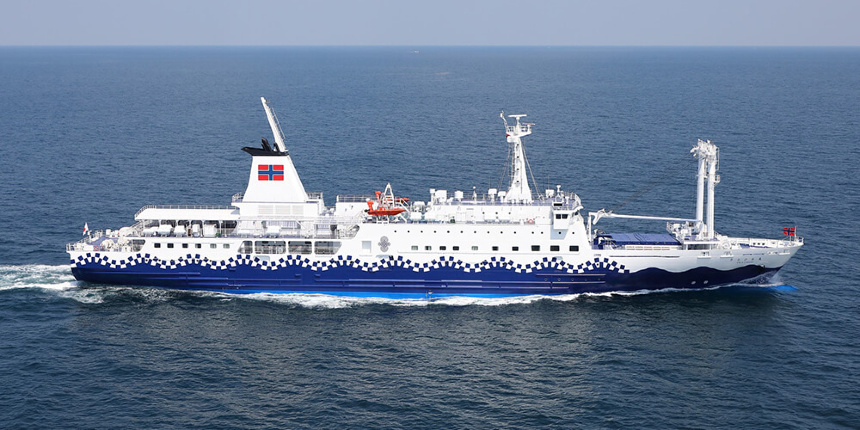 As with some of the other vessels in the fleet jointly operated by JRTA and Tokai Kisen, the ferry’s exterior livery consists of geometrical patterns and a hue that the designers have called “Tokyo Island Blue.” The livery was the work of noted Japanese artist Asao Tokolo, who is perhaps best known for designing the official emblem of the recently concluded Tokyo 2020 Summer Olympic Games.

“Another notable feature of the ferry is its contra-rotating propeller (CRP) propulsion system wherein a uniaxial controllable-pitch propeller (CPP) – connected directly to a Mitsubishi 5,220kW main diesel engine – and an electric-driven azimuth propeller are arranged in such as way that they are facing each other. The two propellers rotate in opposite directions so that the rotational energy of the CPP in front is absorbed by the azimuth propeller in the rear.”

An advantage offered by this unusual propulsion layout is its reduced number of moving parts compared to a traditional twin shaft system. This then results in lower water resistance at the same speed, allowing the vessel to consume less fuel while covering the same distance.

The vessel is also fitted with a Mitsubishi integrated steering system that ensures direct control over the two contra-rotating propellers, thereby improving efficiency and safety. This system, when coupled with the bow and azimuth thrusters, provides the operator with enhanced, precise control during berthing and unberthing. This attribute fulfilled another requirement of the owners for quicker turnarounds.

The propellers were also designed to be better-protected against small debris, which can impact against the vessel especially when berthing.

Somewhat surprisingly, the unique propulsion layout did not present the biggest challenge in Salvia Maru‘s design and construction.

“The ferry’s navigation area extends to the Ogasawara route,” Mitsubishi told Baird Maritime, referring to the route leading out to the Bonins. “Strict rules pertaining to the partition of bulkheads and the installation of sprinklers are being enforced here, and we had to comply with these while ensuring the vessel had the necessary barrier-free spaces and clear height required for nighttime cruising within Tokyo Bay.”

The designer added that, according to the rule of navigation along the Ogasawara route, it is necessary to set up a comb of about 300 millimetres on the lower surface of the entrance facing the exposed part in order to suppress the intrusion of seawater, and the clear height of the door inevitably becomes small. In the case of passenger ships, the clear height is a matter of common practice, hence the importance of thoroughly verifying and consult with the shipowner in advance before it becomes a problem.

Mitsubishi said it was nonetheless able to overcome these impediments, and the result is a versatile ship capable of both long-range, inter-island travel as well as nighttime bay cruising, with the added benefits of improved fuel economy, better manoeuvrability, greater comfort, and shorter turnaround times. 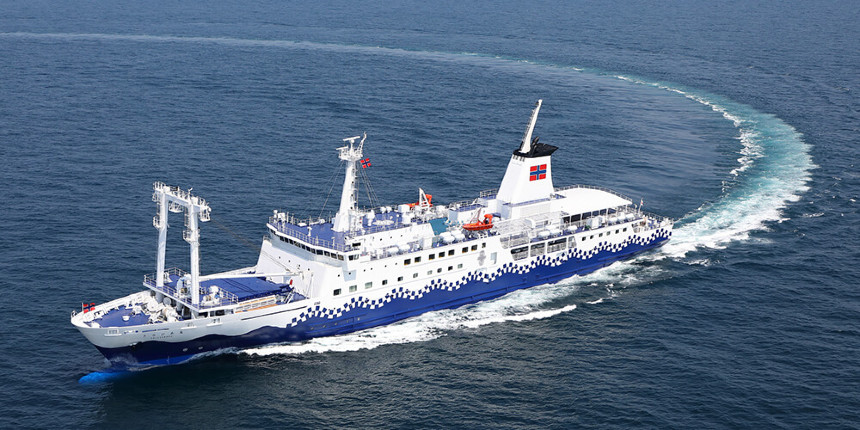