Austal Philippines has handed over a new Ro-Pax ferry to Fjord Line of Norway.

Classed by DNV and sailing under the Danish flag, the catamaran vessel boasts a number of design innovations that enhance operating performance and passenger comfort, including a new, optimised hull form that will minimise fuel consumption and wake wash when operating on the Skagerrak Sea between Hirtshals, Denmark and Kristiansand, Norway.

Power is provided by a quartet of MAN 20V 28/33D STC main diesel engines that each produce 9,600 kW. The engines drive four waterjets via ZF 60000 NR2H gearboxes, allowing a cruising speed of 37.5 knots to be achieved at 90 per cent MCR.

As with all of Austal’s recently completed newbuilding projects, Fjord FSTR features a specially developed motion control system that will help ensure improved stability and comfort even at high operating speeds. The system uses an array of hull-mounted sensors to monitor vessel motion. An advanced algorithm then computes the correct amount of damping forces that need to be generated by a set of hydraulically-powered T-foils that have been installed on the lower hull sections.

High processing speeds enable the T-foils to continually adjust and apply just enough damping forces to control the vessel’s pitch and roll at all speed settings under a broad range of operating conditions, thereby keeping the attitude as level as possible even when the sea gets rough. The motion control system can be remotely monitored via mobile device, through the ferry has a backup engineer control station with an operator override function that will allow the crew to take full manual control of the T-foils in the event of an emergency.

The passenger accommodation areas are located on the upper deck, which has a total seating capacity of 870, and the bridge deck, which can house the remaining 330. The two decks each have a small mess for the crew while the upper deck also has multi-cubicle male and female restrooms.

Because of its size, the ferry offers a greater number of amenities compared to the other vessels in its owner’s fleet. Passengers can choose from three different dining options while both the children’s play area and the duty-free shop are nearly twice as large as those on Fjord Line’s former 91-metre ferry Fjord Cat, which has since been sold to an operator based in Germany.

One of the vessel’s onboard restaurants has a lounge area with reserved seating that passengers can access after paying additional for admission. The other two dining options include a cafe and a bistro, and the latter area even has charging ports for passengers’ mobile devices.

The cargo decks also have charging stations for use by electric vehicles. Fjord Line has claimed that Fjord FSTR is the first Norwegian-owned passenger vessel to offer such a capability.

The newbuilding contract for Fjord FSTR was awarded to Austal in the summer of 2017, and construction duly commenced at the company’s Philippine shipyard in Cebu province the following spring. The vessel was completed and delivered earlier this year and has since taken over the Kristiansand–Hirtshals route once served by Fjord Cat. Fjord Line said that, although Fjord FSTR can also cover the one-way distance in two hours and 15 minutes just like its predecessor, the newer ferry has doubled both the passenger and vehicle capacities along the same route. 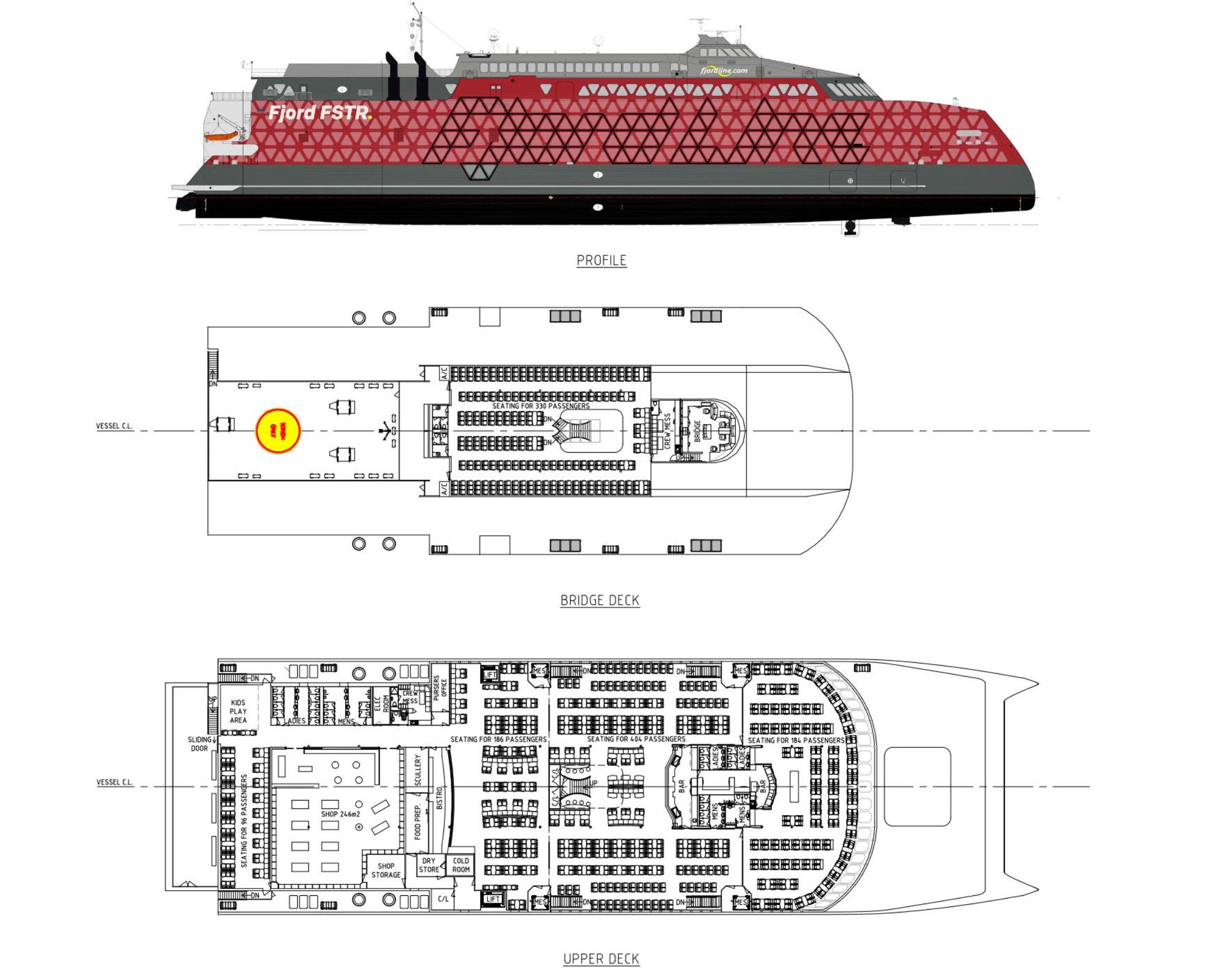 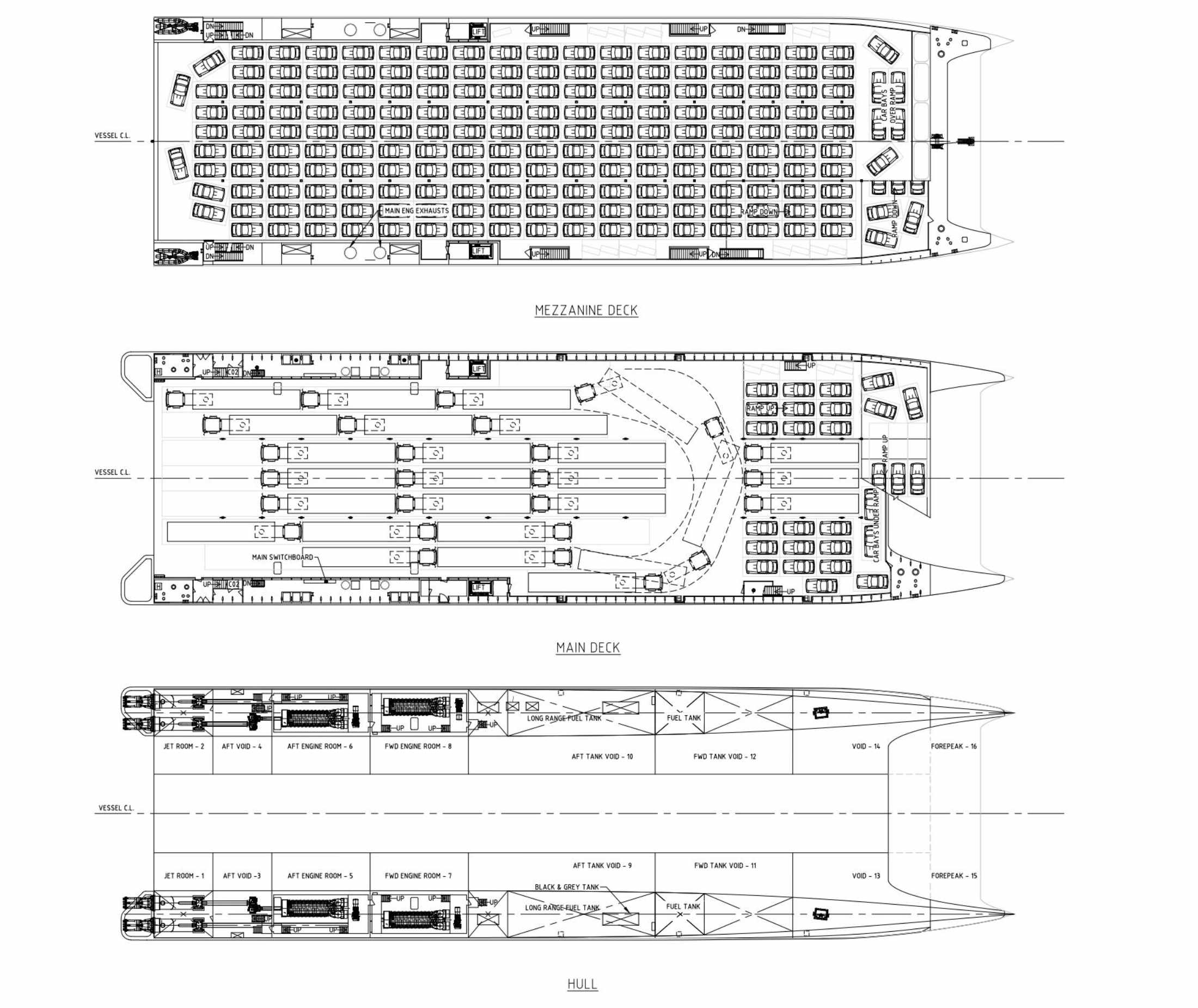