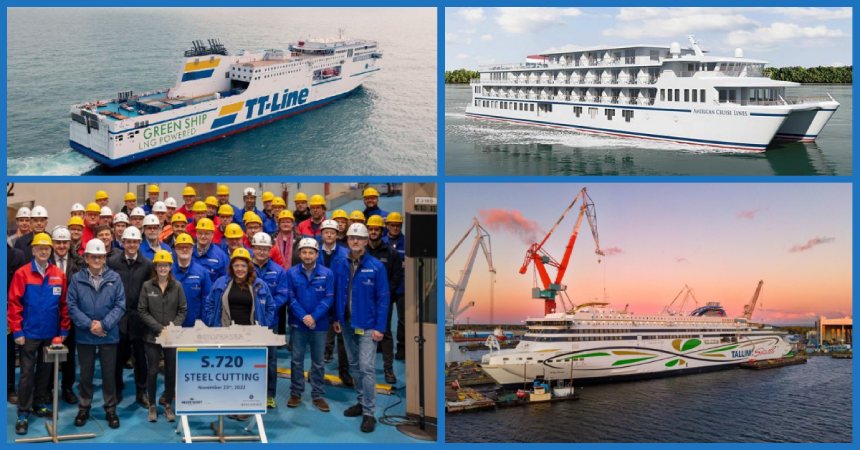 New Ro-Pax ferries have been delivered to operators in Germany and Estonia while construction commences on cruise ships ordered by customers in Monaco and the United States. Remarkably, all but one of this week’s featured vessels are fitted with LNG propulsion.

German operator TT-Line has taken delivery of the second Ro-Pax ferry in a series built by CMI Jinling Shipyard in China.

Peter Pan is a sister vessel of Nils Holgersson, which was delivered to TT-Line earlier this year. Both vessels measure 230 by 31 metres and can transport 800 passengers and up to 4,000 lane metres of freight.

As with Nils Holgersson, Peter Pan is also powered by LNG. It is scheduled to enter service on TT-Line’s Baltic Sea routes in early 2023.

MyStar will depart RMC’s facilities later this week for its delivery voyage to Estonia. It will sail on its maiden operational voyage on Tuesday, December 13.

The new ferry measures 212 metres long and has space for 3,000 passengers plus 1,900 lane metres of freight. Power is provided by a dual-fuel propulsion system that can also run on LNG.

The future American Liberty will have capacity for 105 guests. It is scheduled to enter service in May 2024.

Two earlier sister ships, American Eagle and American Glory, are under construction and will commence operational sailings with ACL in 2023.

All three vessels belong to a series of 12 catamarans that ACL will operate exclusively in the United States and will focus on small towns.

The ship will be fitted with an LNG propulsion system, batteries, and a 4MW fuel cell system to supply power for hotel operations. A micro auto gasification system (MAGS) will meanwhile convert waste on board into thermal energy.

Silver Ray will enter service in the summer of 2024.