Whale Watch Kaikoura, a tour operator based on New Zealand’s South Island, recently welcomed a new vessel to its fleet.

The bespoke newbuild is the second Whale Watch Kaikoura vessel to be named Te Ao Marama, a Maori phrase that translates into “world of light.” Both the earlier vessel, which was in operation from 2000 to 2016, and the newer one were designed and built by the team of local companies Teknicraft and Q-West Boat Builders.

The newer Te Ao Marama has a length of 24 metres, a beam of 9.2 metres, a draught of 0.9 metres, and seating for up to 116 passengers on two decks. The premium cabin on the upper deck has VIP seating for 12 passengers, a small refrigerator, a drinking fountain, and a plasma television screen. The executive-style, extra-wide contour seats, which were supplied by Beurteaux, face partially outward and help guarantee greater personal space for each guest.

The remaining 104 passengers will be accommodated in a cabin on the main deck. This cabin is enclosed and features large outside viewing decks including a grandstand area on the bow. The spacious interior has plasma television screens as well.

The windows on both decks are large enough to provide passengers with better views of the surrounding marine environment even while indoors. Also, both the main cabin and the premium cabin benefit from the vessel’s advanced climate control and ventilation system, which among other things allows the air in the interior spaces to be replaced every six minutes, circulating fresh air for improved passenger comfort. 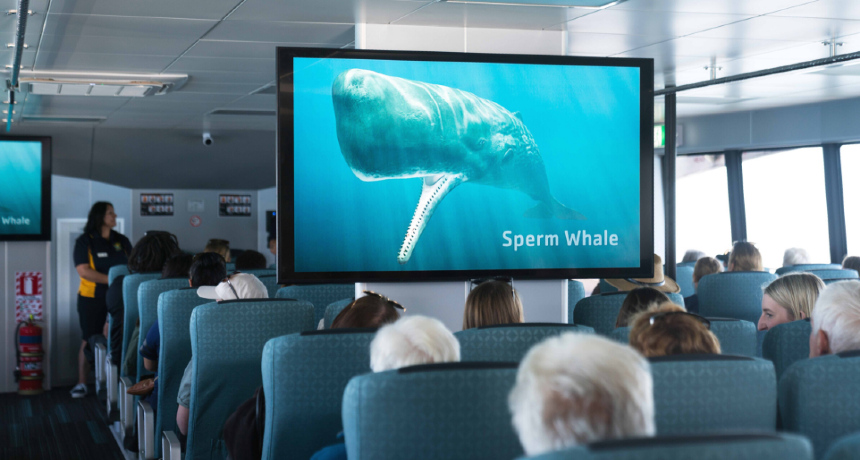 The vessel also has wi-fi connectivity, charging points for mobile devices, a cooler for storing refreshments, and a PA system to enable guides to explain the various sights and sounds to passengers on each trip.

A quartet of Scania DI16 076M 671kW main diesel engines drive HamiltonJet HJ364 waterjets to deliver speeds of up to 48 knots. Control of the waterjets is via a HamiltonJet AVX 3 station electronic system, guaranteeing quicker and more precise manoeuvres when sailing in close proximity to whales and other forms of marine life and reducing the risk of collisions. The waterjets also generate very little underwater noise, ensuring only minimal adverse impact on the surrounding marine environment. 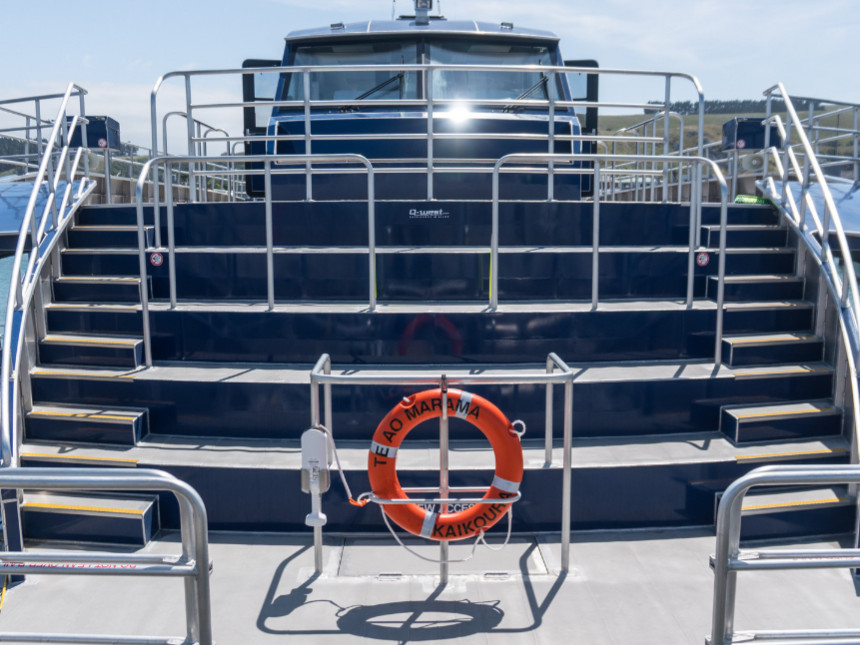 The other notable features on the newer Te Ao Marama are a sickle bow hull design and an adjustable hydrofoil system to improve vessel performance and seakeeping capabilities. A Naiad active ride control system has also been fitted to automatically reduce pitch and roll, enabling the operator to fully assume control of the helm and the throttles while underway.

Te Ao Marama has already begun sailing on excursions off Kaikoura, which has become a popular area for sightings of sperm whales, humpback whales, orcas, dolphins, fur seals, and other marine species.