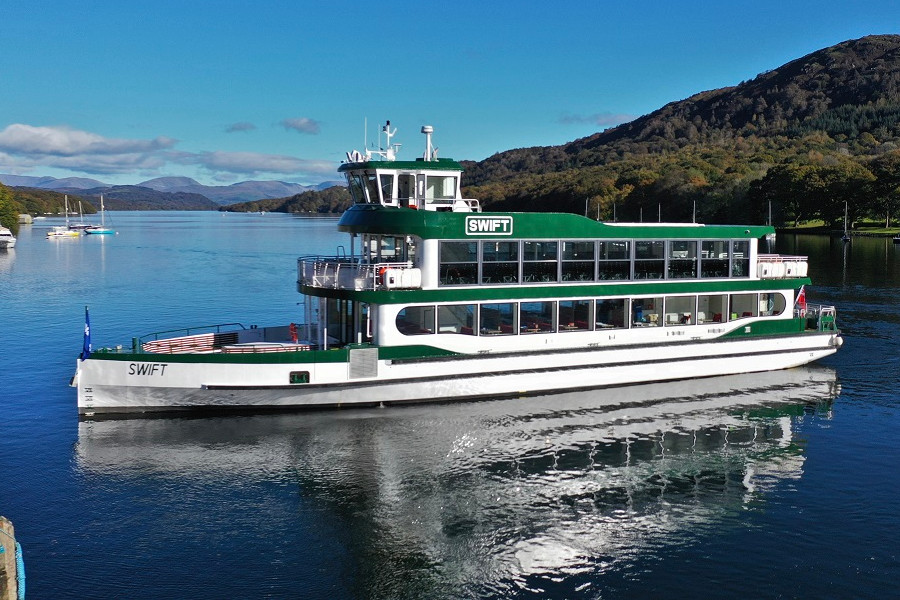 Swift is being operated by Winander company Windermere Lake Cruises on excursions in north west England’s Lake District National Park, a popular UK tourist attraction that was declared a UNESCO World Heritage site in 2017. The vessel was designed by Damen in collaboration with the owners and the local community to ensure that it complied with the strict regulations intended to preserve the park’s fragile environment.

The design work that went into the vessel also ensured that it was capable of operating under a variety of weather conditions year-round. In addition to sailing on day trips, the vessel will also provide a venue for evening functions and other private events. 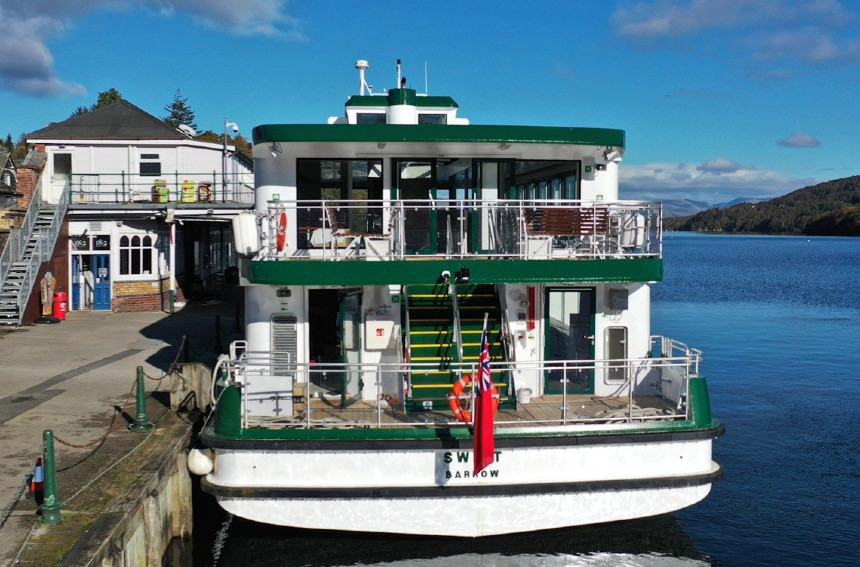 Swift is the seventeenth vessel to join Windermere’s active fleet of day cruise ferries. Measuring 34.4 metres in length, it is also slightly shorter than the company’s existing flagships, Swan and Teal. However, the newbuild was designed as such to enable it to dock at the smaller jetties situated throughout the 2,300-square-kilometre park.

Windermere chairman Bill Bewley said the acquisition of Swift came about after the company decided that it wished to accommodate a “consistent and extensive growth” in visitor numbers to the famed park in addition to increasing the size of its fleet. 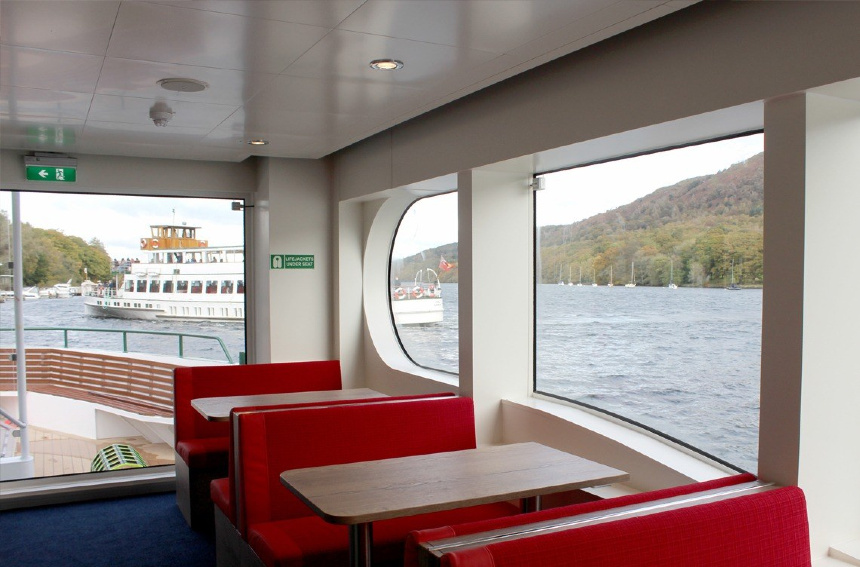 Because of the lake’s unique attribute of being completely landlocked, Damen concluded early on that the normal procedure of having the vessel transported to the customer was not feasible. As design and proposal engineer Maarten Lamboo confirmed, Damen resorted to allocating a significant portion of the assembly lakeside near the vessel’s intended area of operations. The hull and the superstructure were pre-fabricated in sections at Damen Shipyards Kozle in Poland and then transported to Windermere’s facilities for final assembly by personnel from Damen Shipyards Gorinchem.

Designed as a one-off vessel, Swift is powered by a diesel-electric propulsion system with two Volvo Penta engines and azimuth thruster pods and a hull that aids in minimising wash in line with Windermere’s goal of operations with reduced environmental impact. Damen said that the ferry was also designed with an emphasis on a long service life to fulfil the owner’s requirement for a vessel that can successfully manage growing numbers of passengers for years to come. 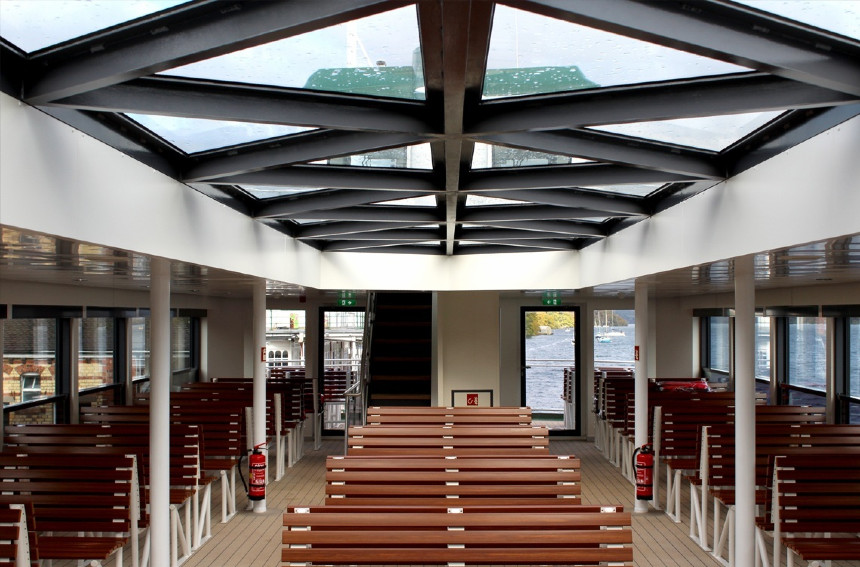 Up to 300 passengers can be accommodated on two fully-enclosed decks, though the upper deck may be opened automatically depending on the weather. Bewley said it is the first vessel in the Windermere fleet to possess this capability.

The uppermost deck contains the pilothouse, from where the vessel will be operated by a crew of four.

The interiors were designed by Damen’s own team of superyacht specialists to ensure both comfort and an elegant feel. The passenger spaces also feature USB charging ports, wheelchair access, a lift, sensor-activated sliding doors, and centrally heated saloons and toilets. The upper deck has movable seating to allow the interior space to be customised for a variety of special occasions.

Onboard amenities include a bar, a snack kiosk, and view stations.

Swift was delivered to Winander Leisure in early October 2020 following a planning and construction period that lasted 18 months. Later in October, the vessel formally entered service with Windermere Lake Cruises and embarked on its maiden operational cruise. 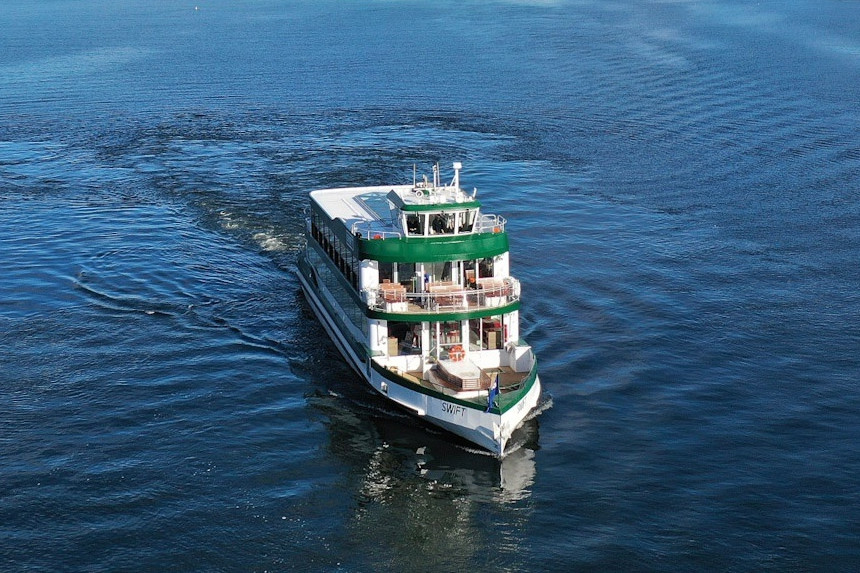