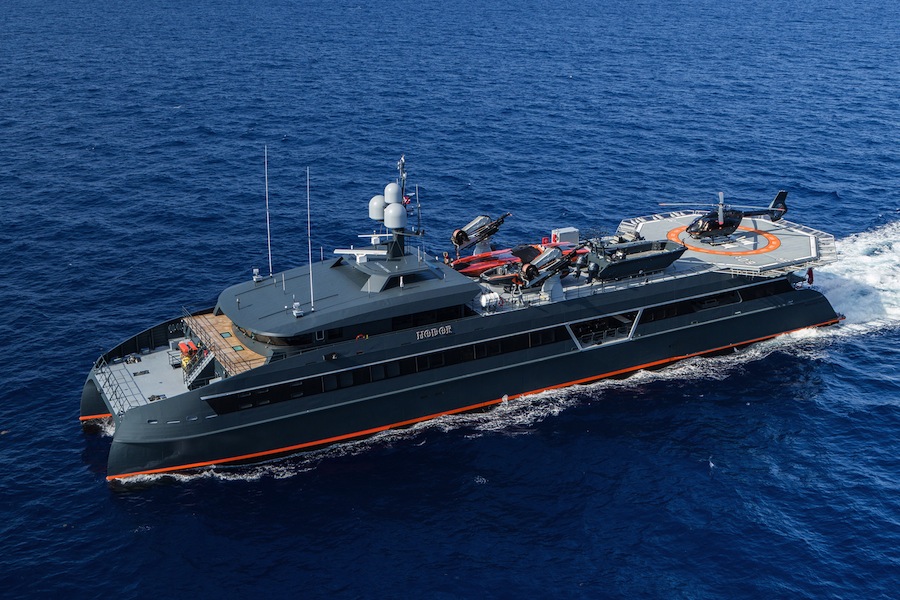 Shadow vessels are a new breed of workboats. They are designed to blend in amongst super yachts with their smooth lines and gleaming chromed steel, however their purpose is to reduce crew numbers on the main yacht, allowing room for more guests, whilst also offloading other tasks that interfere with the enjoyment of being on a motor yacht.

Hodor offers large amounts of deck and storage space, flexibility, stability, efficiency and capability. The design offers a stable platform for the safe transfer of guests from helicopter to the mothership, via tenders.

Hodor allows for more luxury space to be available onboard the mothership while offering access to toys on demand. It also gives the crew a separate space to manage the operation and maintenance. The vessel can also act as a reception space for visiting guests, transferring them from helicopters to tenders.

Hodor has been completely customised to carry the specific equipment and supplies to support and enhance the owner’s mothership capabilities. The design uses the robust engineering of hulls proven in offshore platform service, such as the Seacor “Crewzer”-class and Incat Crowther’s 70-metre fast crewboat class. The hull incorporates a reverse bow, a deadweight capacity of 240 tonnes and a low propeller draught of 3.1 metres. 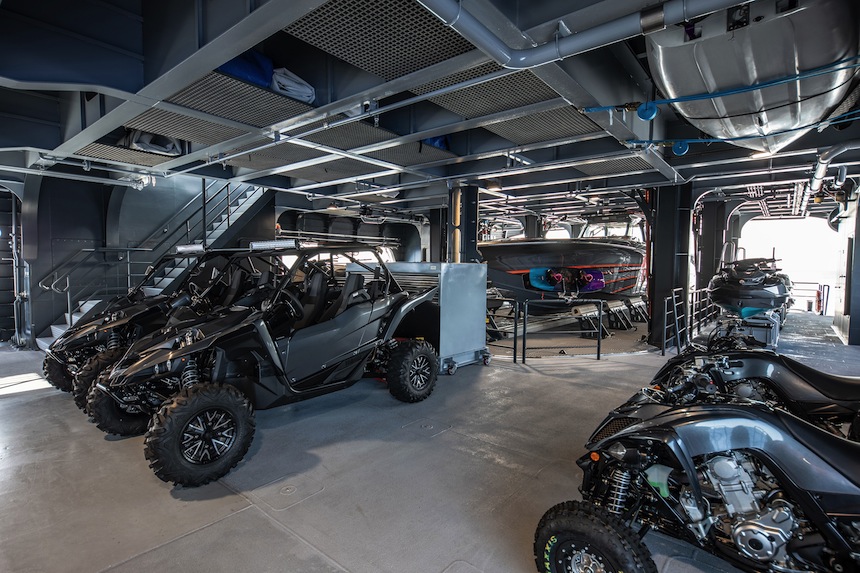 The platform accommodates an astounding number of toys, facilities and personnel. This includes five tenders (the largest being 17 metres in length), jet skis, quad bikes, a submarine garage, a helipad, a large complement of crew, staff and support equipment. 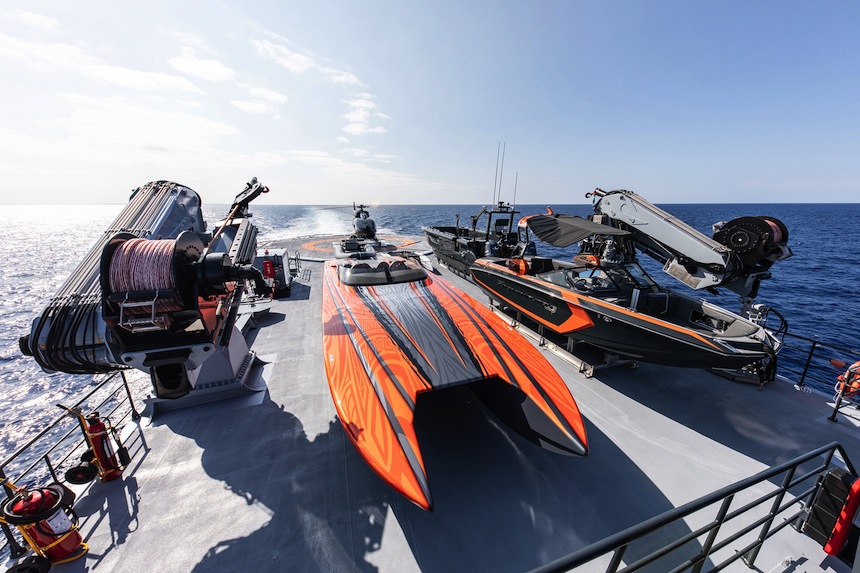 The tenders and submarine are flexibly located and can be launched from the upper and main decks. On the upper deck via the two large knuckle boom cranes, and on the main deck via twin beam cranes. A primary feature of the vessel is the the aft lifting platform for the 17-metre chase boat. A portable davit on the fore deck facilitates the launch and recovery of the vessels ROV and can also be used for additional jet ski storage.

The submarine garage is housed in the centre of Hodor. The launching system for this uses air casters to transfer it from the garage to the beam cranes for launching.

Incat Crowther has a number of vessels with fast launch and recovery systems – these existing proven systems were scaled up to the suitable size to allow the chase boat to be launched easily and quickly between the catamaran hulls. 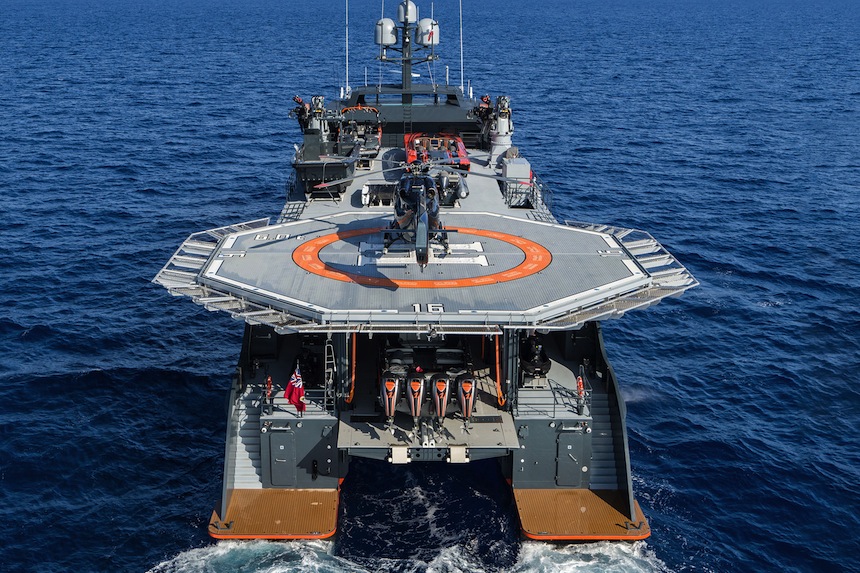 The helipad is a fully-certified and CAP437 compliant for helicopters of six tonnes and up to D-value of 16 metres including the Eurocopter EC145. A large reception room, finished to a yacht standard, sits forward of the helipad, allowing guests to be transferred in comfort between helicopters and tenders. 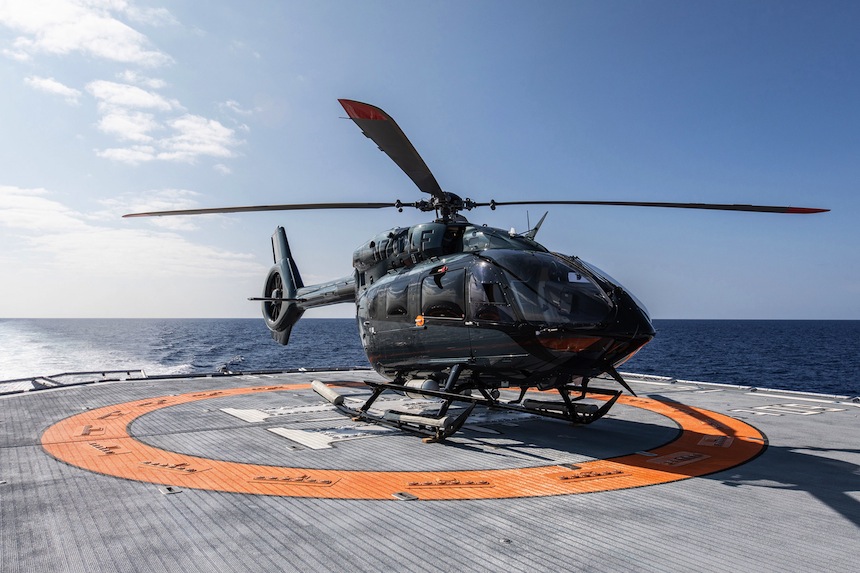 Incat Crowther found that the catamaran platform lent itself well for helicopter support operations given the increased deck area, in particular the wide beam, and good level of stability.

The port hull shell door, provided for guest access is finished to a yacht standard and directly connected to the guest lounge via a guest staircase. The starboard hull shell door is reserved for crew operations. There is also water access via two stern platforms, should weather conditions require stern boarding. 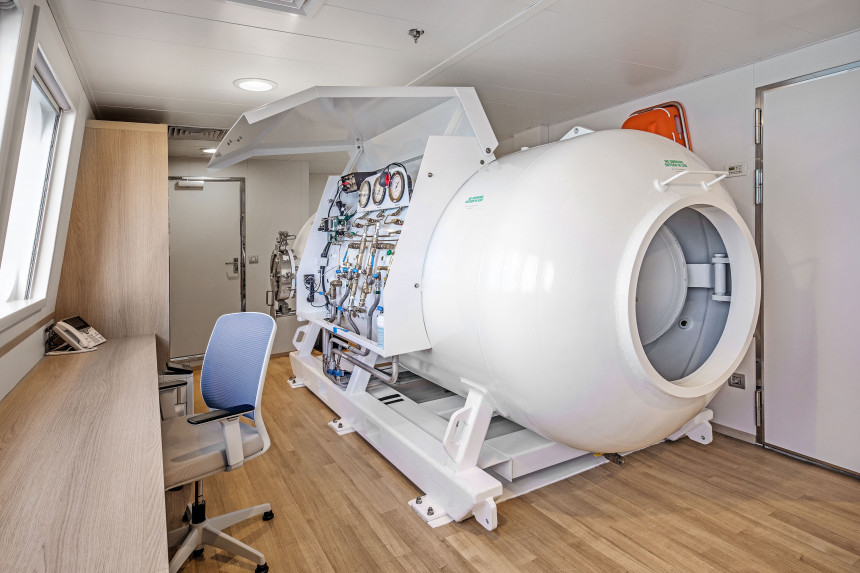 Dive equipment is fully integrated with compressors, nitrox and oxygen facilities, as well as a hospital with decompression chamber.

Specialised spaces are dedicated for fresh and frozen food storage, additional storage for the mother vessel, waste treatment and general and spares stores.

Propulsion is provided by two main engines, giving a max speed of 22.5 knots, or long-range cruising at 14 knots up to 5,500 nautical miles. The catamaran platform allows fuel savings of around 40 per cent, affording the full vessel range with only 160,000 litres of diesel fuel. The vessel’s tankage supplies toys and vehicles with jet fuel, petrol and diesel from dedicated bunker stations.

A complement of 20 crew and staff are comfortably accommodated in a mix of double and twin ILO-compliant staterooms, each with ensuite bathrooms. 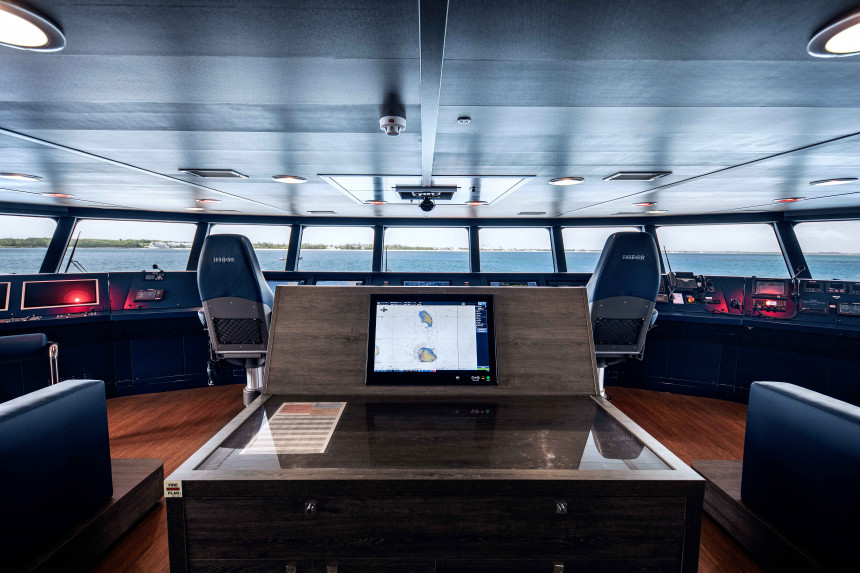 The wheelhouse is situated with excellent visibility. Access to electronics systems is simplified with incorporation of a walk-around main helm console and a dedicated MEC.

The inherent stability of the catamaran does not require gyro or roll stabilisers whilst at rest. When underway, the vessel pitching motions are reduced by twin Humphree active interceptors on the stern.

A twin anchoring system is provided, which, combined with the widely spaced twin hulls, provides reduced motions whilst at anchor. 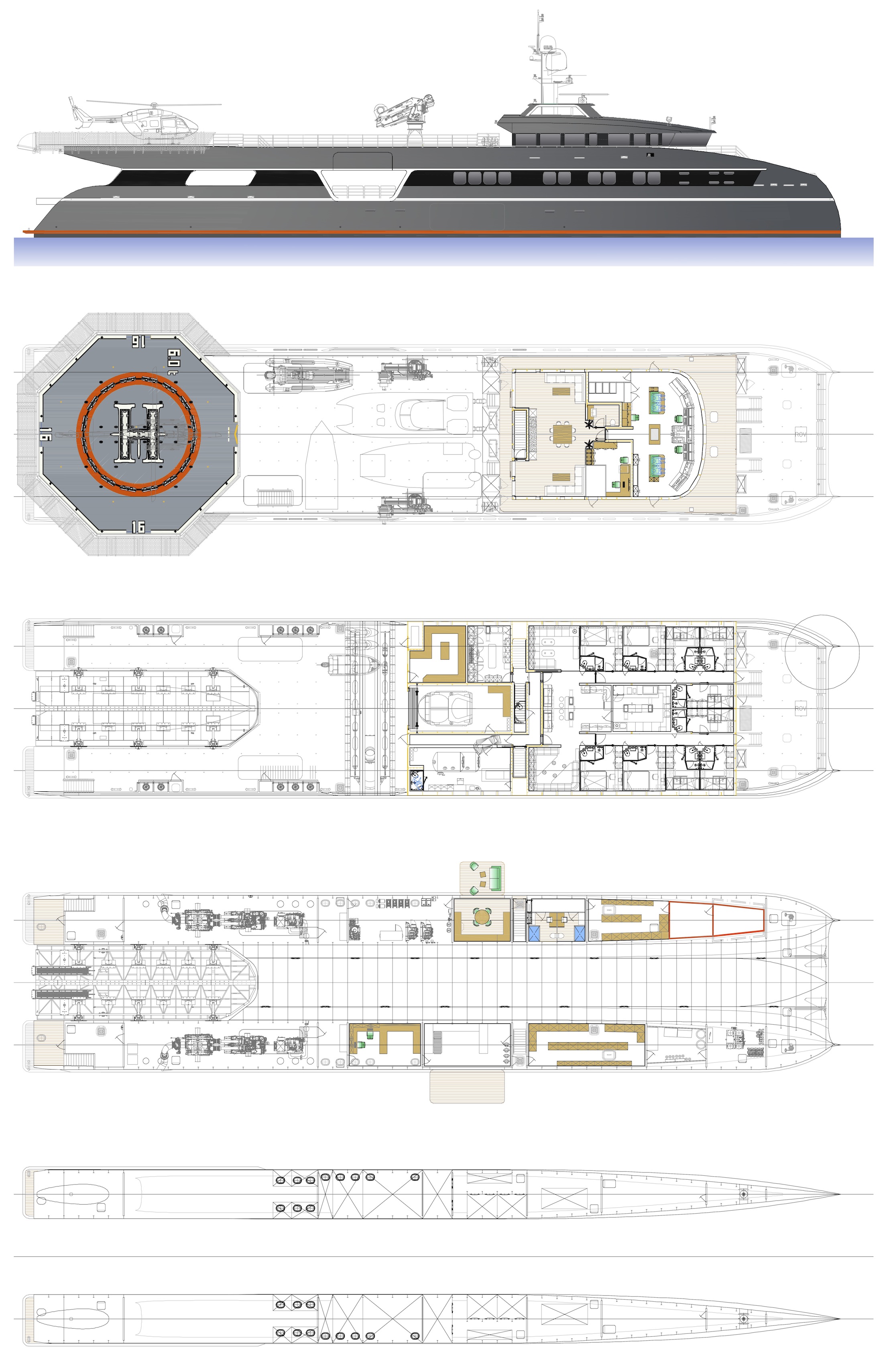