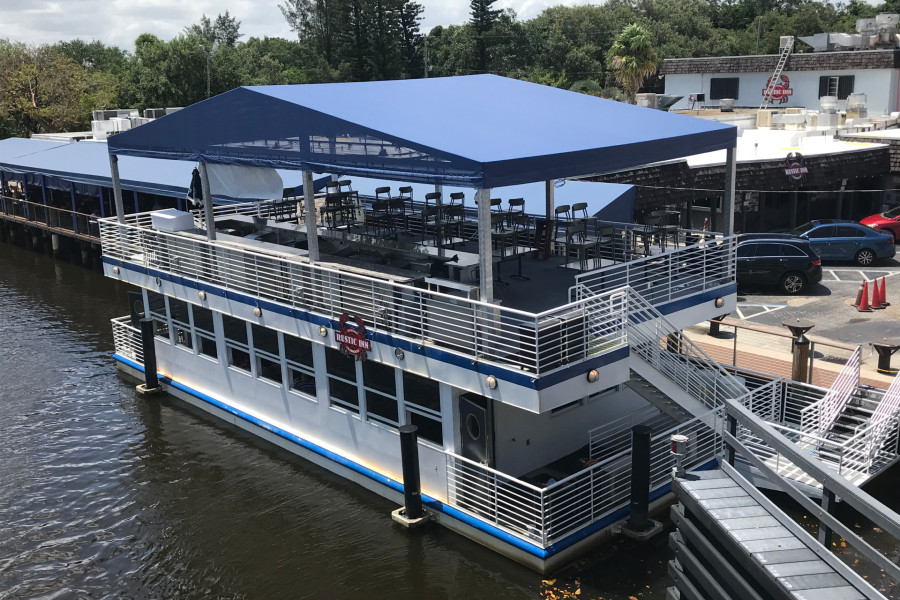 Designed by Kerwin Naval Architects, also based in Fort Lauderdale, and built at the facilities of St John’s Ship Building in nearby Palatka, the non-self-propelled pontoon is being operated as a floating restaurant and bar by Rustic Inn Crabhouse, a decades-old waterfront seafood establishment that was acquired by Ark Restaurants in 2014. 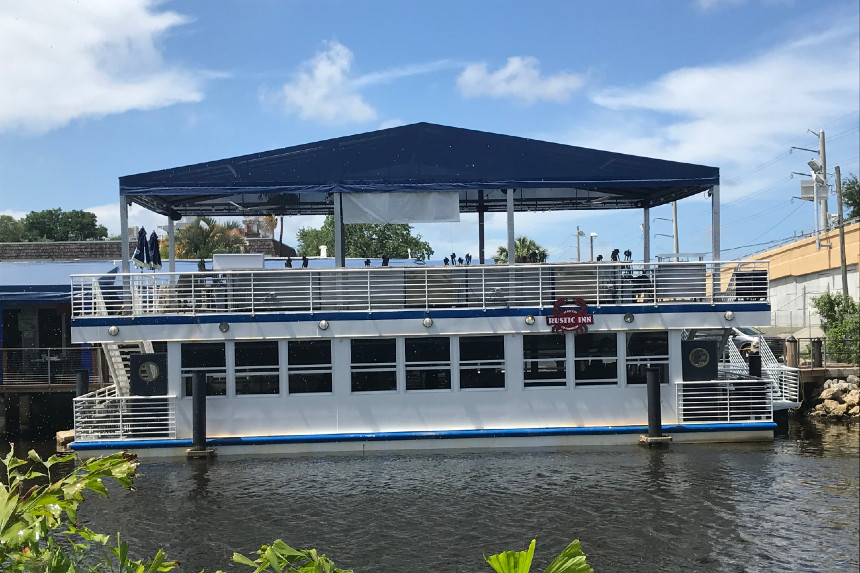 There is onboard space for up to 160 guests plus restaurant staff in an enclosed main deck and an al fresco dining and bar area on the upper deck with stairway access between the two areas. As part of Rustic Inn’s facilities, the barge is also available as a venue for private events for groups of 25 people or more in addition to operating as a dining area for accommodating the restaurant’s daily walk-in customers. 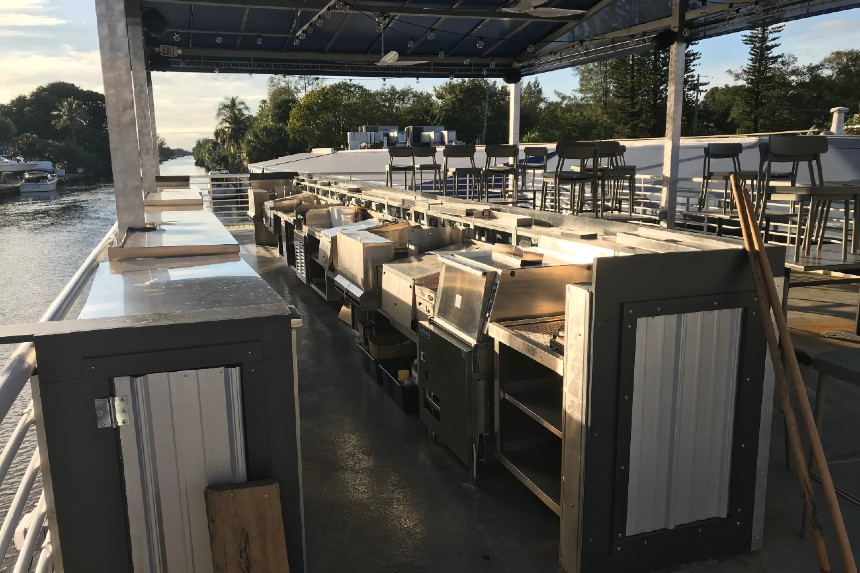 The vast interior of the vessel is fully furnished with bar equipment from Uni-Source Supply, interlocking wear- and slip-resistant laminated vinyl floor surfaces from Gerflor, and a ceiling from Armstrong. The design work on the interior was provided by architect Marcelo Moino.

All of the windows on the vessel’s main deck were built with hurricane impact-resistant properties, thus ensuring that they can withstand even the worst possible weather conditions in Southeastern Florida during the period from early June to late November. The windows were supplied by Eco Windows Systems.

The upper deck meanwhile has aluminium supports for keeping the awning firmly in place. 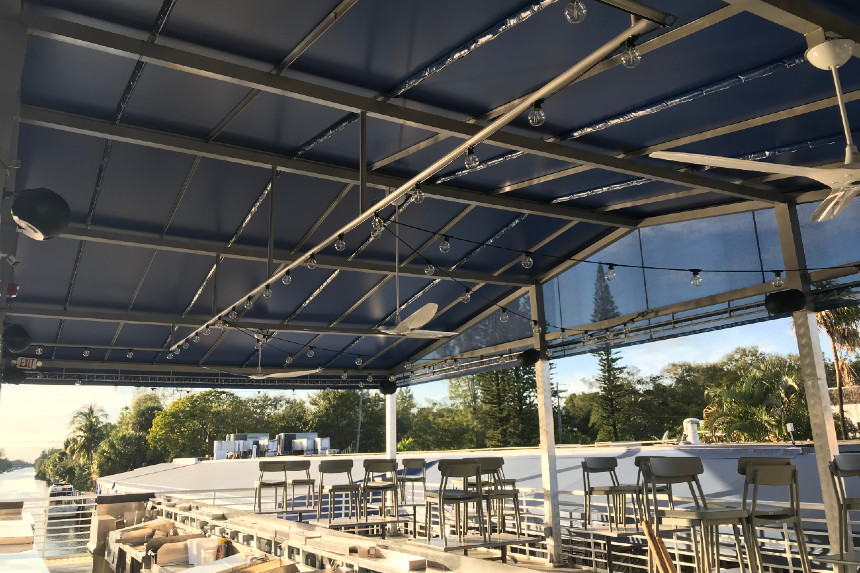 A set of 12V D batteries provides the electrical power for all of the barge’s onboard electronics and equipment, which include an audio/video system, alarms, and cameras supplied by Rydan Electronics, exterior lighting provided by Nauticus, and interior lights from Quoizel.

The safety features on the barge include an array of life buoys and hull fendering installed by West Marine while International Paints and Ceram Kote provided the coatings for all the exterior surfaces.

The new dining barge was handed over by St John’s Ship Building to Rustic Inn Crabhouse in December 2020. It has since been serving customers out of its location on one of the canals near Fort Lauderdale–Hollywood International Airport. 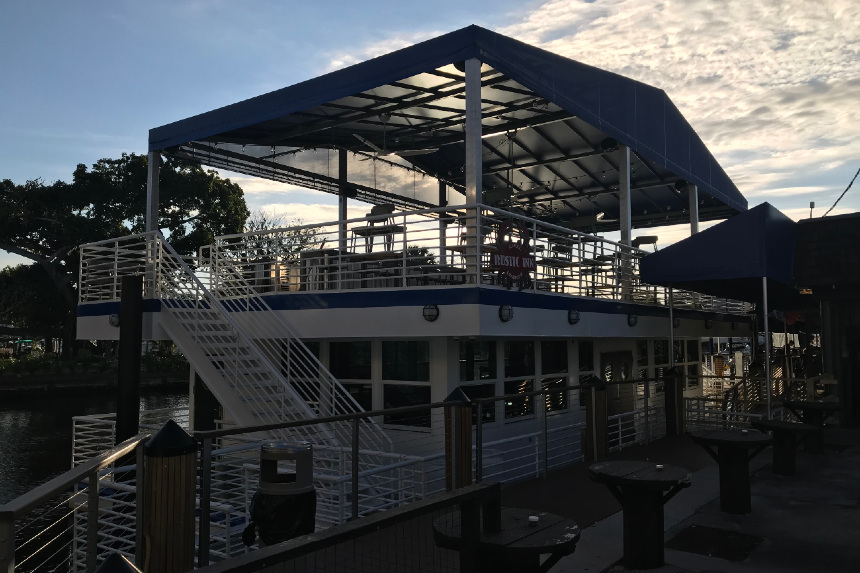 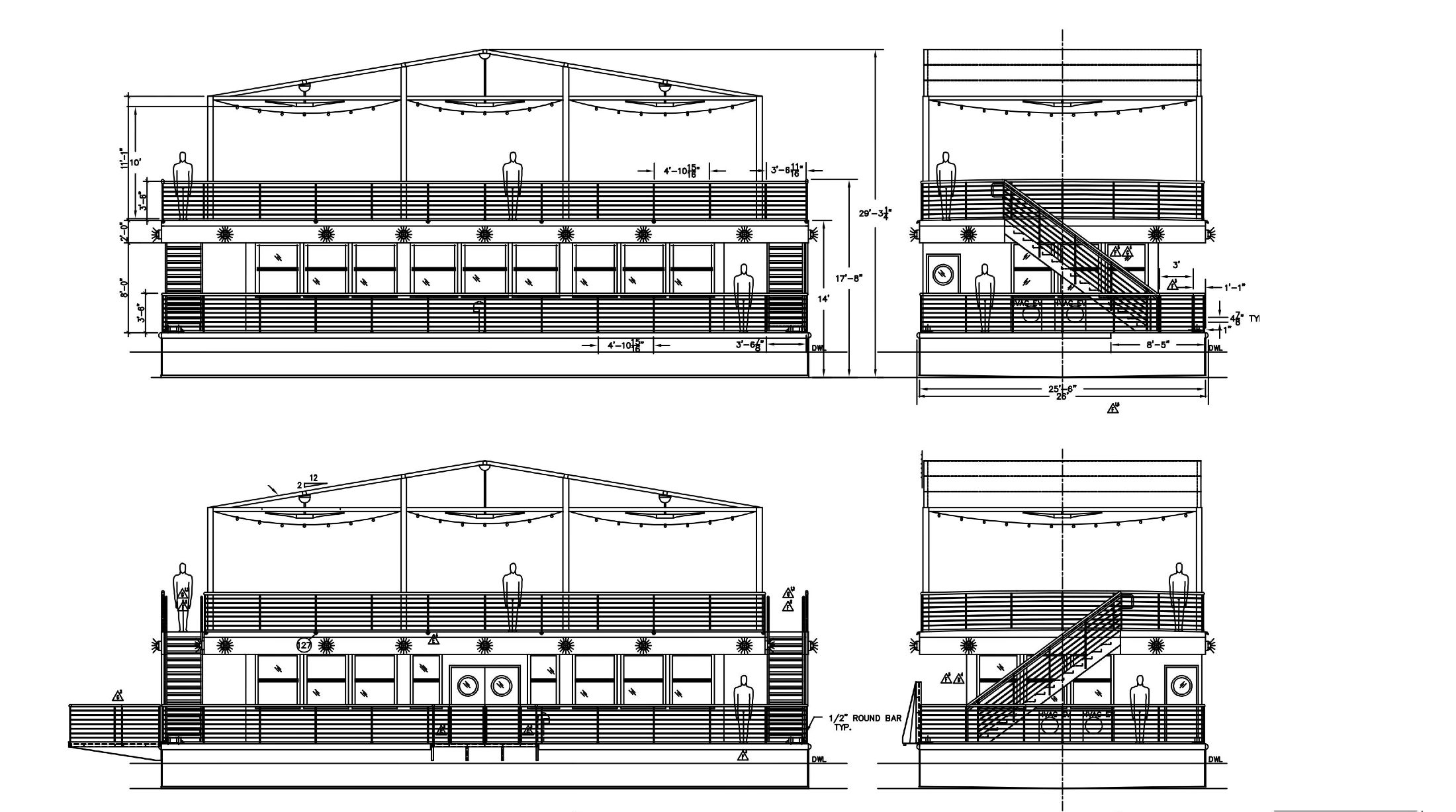 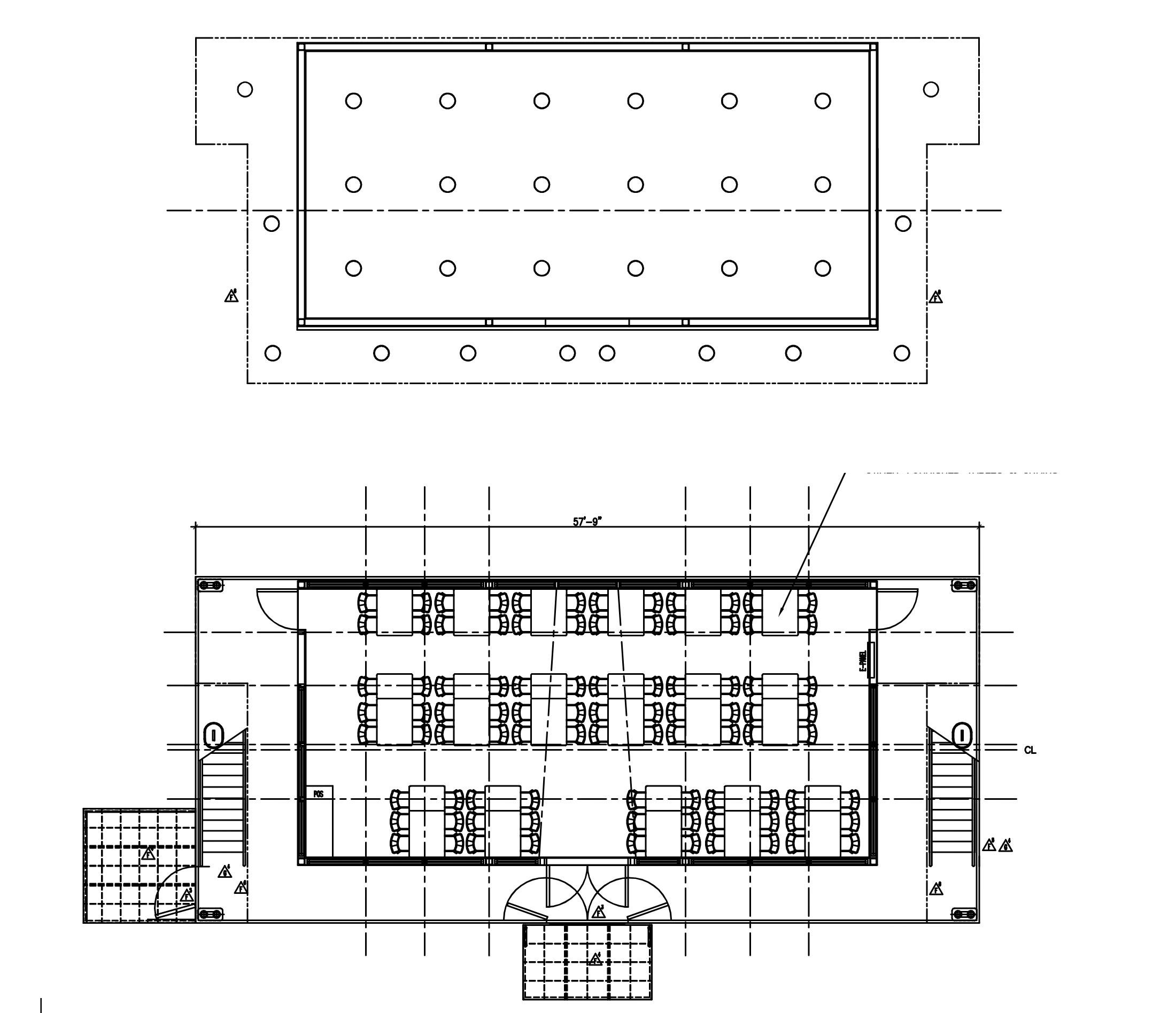 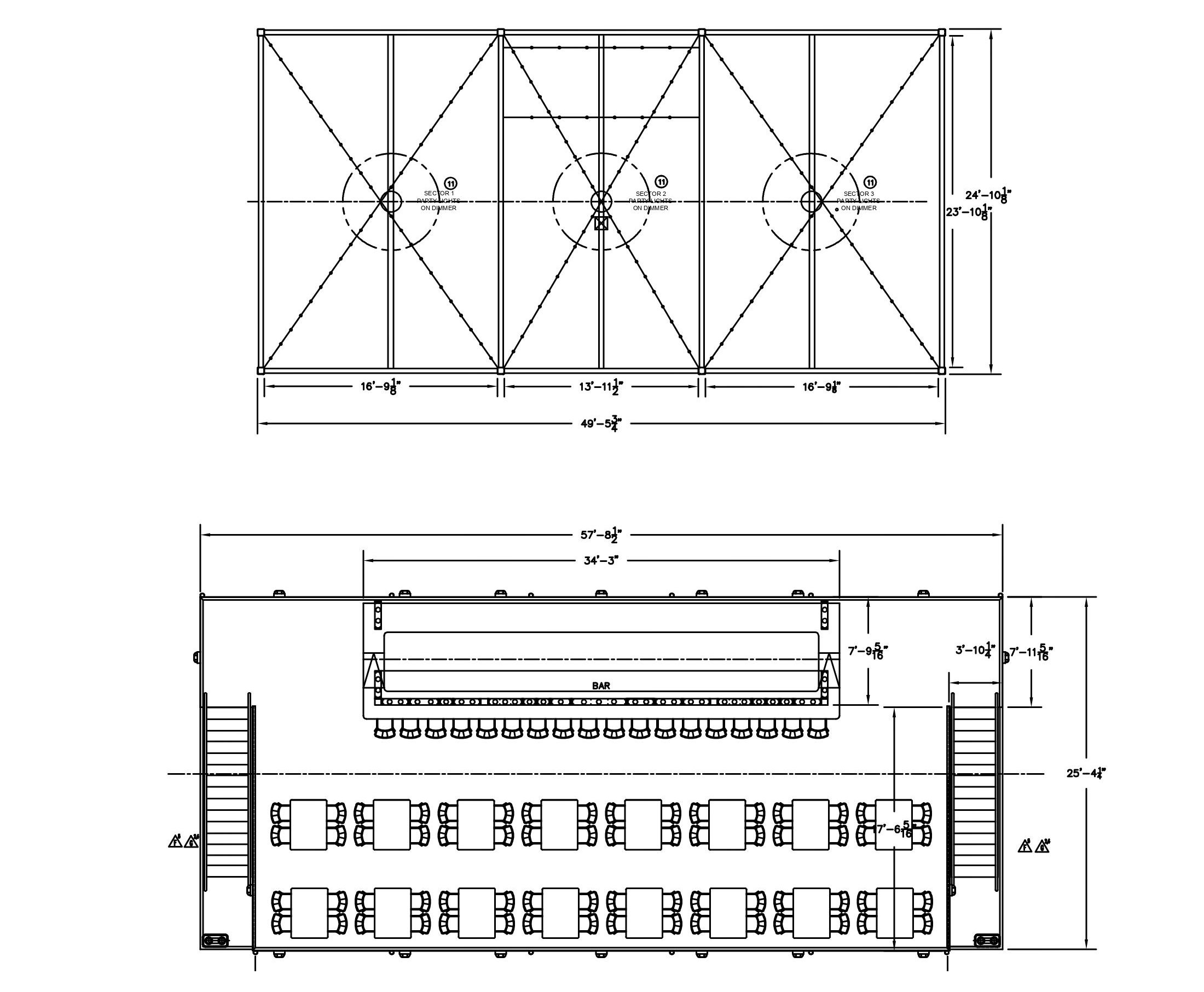