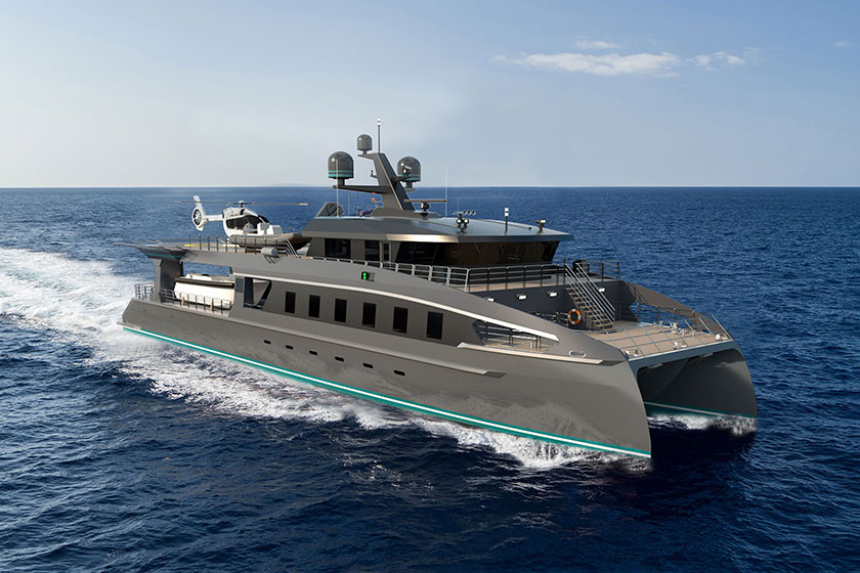 Incat Crowther and YCTS said the new vessel will incorporate many of the key features of their larger designs but on a smaller hull platform to suit the needs of owners who require support for superyachts of 50 to 70 metres in length.

The 48-metre vessel will have a 12-metre beam and a draught of 2.15 metres, which will permit close coastline navigation. Though all features can be customised according to the owner’s preference, the concept will include a helipad, accommodation for 14 or more crewmembers, and storage over three decks.

The 13-metre helipad is fully-certified and CAP437 compliant for helicopters including the Airbus ACH145, AW119, and Bell 429.

The large aft main deck will allow for three tenders up to 10 metres in length in the base configuration.

The launch and recovery system will consist of overhead beam cranes. Forward of this, the main deck cabin will house facilities such as a deck store, a galley, mess, and accommodation.

Incat Crowther said the catamaran hull form will offers 40 per cent more volume and 60 per cent more deck space, allowing for crew accommodations and greater amounts of payload – such as helicopters, tenders, jet skis, submarines and the like – to be stored. Additionally, the catamaran hull design is proven to be more efficient, delivering less fuel burn and higher speeds, with a 70 per cent increase in stability during offloading/loading operations.

The designers said the vessel can be built at Armon Shipyard in Spain in only 18 months.