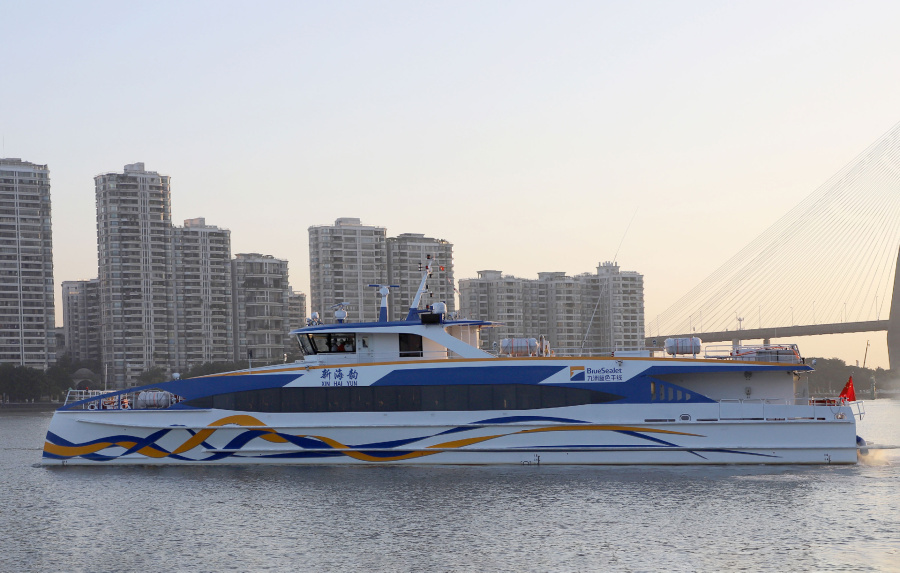 Chinese operator Zhuhai Fast Ferry Company recently took delivery of two new aluminium catamaran vessels in a series for its operations on the Pearl River Delta in the southern province of Guangdong.

Xin Hai Jun and Xin Hai Yun were built by AFAI Southern Shipyard to a China Classification Society-certified design developed by Australian naval architects Incat Crowther. The partnership of AFAI Southern and Incat Crowther was selected for the construction of the new ferries upon the conclusion of a competitive tender process.

The tender had called for modern high-speed vessels that were also capable of more fuel-efficient operations within the Pearl River Delta region, a large area of over 39,000 square kilometres that also encompassed nine prefectures in Guangdong province as well as Hong Kong and Macau. Since Incat Crowther and AFAI have had prior collaboration on an earlier vessel newbuilding project for Zhuhai Fast Ferry, the two companies understood the requirements of not just the customer, but also the waterway environment in which the new ferries will operate. 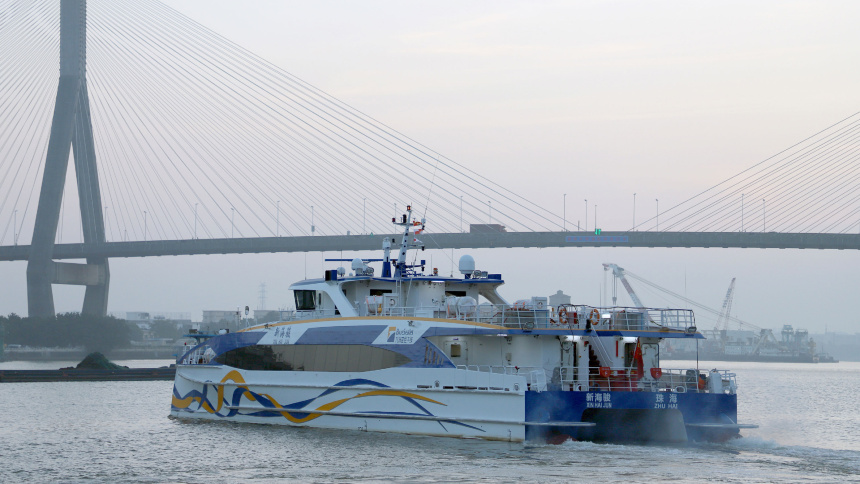 Xin Hai Jun and Xin Hai Yun each have an LOA of 42.8 metres, a beam of 10 metres, a draught of 1.2 metres, and space for 199 passengers and seven crewmembers. Passenger spaces include an economy seating section on the main deck and a dedicated VIP cabin on the upper deck. The amenities on the main passenger deck, which include toilets, a service desk, and crew cabins, have been placed aft to provide passengers with an unobstructed forward view.

Each of the newbuilds is powered by two MTU 12V2000 M72 diesel engines that have a combined output of 2,880 kW at 2,250 rpm. The engines drive a pair of Rolls-Royce Kamewa S71-4 waterjets to propel the ferries to cruising speeds in excess of 30 knots. Further, since both Xin Hai Jun and Xin Hai Yun were designed with unique reverse bows, vertical acceleration is kept to a minimum, thus ensuring greater comfort for both passengers and crew even as the ferries sail at higher speeds as part of their normal operating profile.

The earlier project by AFAI and Incat Crowther for Zhuhai Fast Ferry, the 2018-built Xin Hai Bin, was a 40-metre catamaran with a nearly similar passenger capacity but had fixed-pitch propellers. The switch to waterjets was considered necessary mainly since these will enable the new ferries’ engines to still operate as efficiently as possible even at low speed settings.

Xin Hai Jun and Xin Hai Yun are the eighth and ninth vessels to be built by AFAI Southern Shipyard for Zhuhai Fast Ferry. The newbuilds were delivered in December 2020 and have since been providing high-speed commuter services between Zhuhai, Shekou, and Hong Kong.