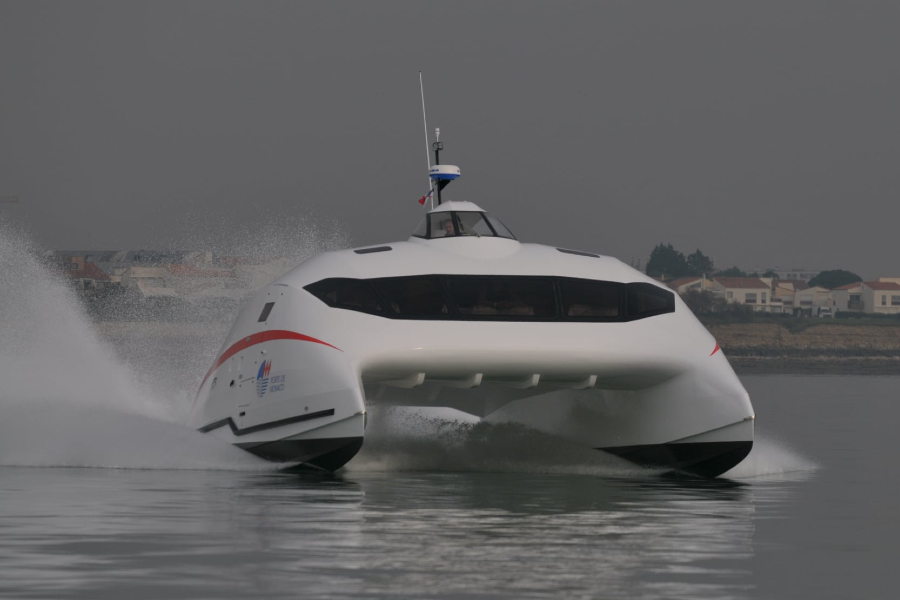 French builder Advanced Aerodynamic Vessels (A2V) has delivered a new high-speed catamaran ferry for use as a yacht shuttle by Monaco Ports Operating Company between Monaco and the Italian city of Ventimiglia.

Named Monaco One, the vessel features FRP and carbon composite construction and a unique aerofoil-shaped hull form that helps generate aerodynamic lift at higher speeds, enabling the craft itself to become lighter and therefore sail even faster.

“The patented concept of passive aerodynamic support allows a dramatic reduction of fuel consumption and improvement of comfort at high speed with air cushion effect,” A2V told Baird Maritime. “Moreover, the crew need not possess any specialised skills or knowledge just to be able to operate the craft as its main controls consist only of a helm and two throttles, just like in a conventional catamaran.”

Measuring 11.95 by 7.4 metres and with an operational draught of only 0.6 metres, Monaco One has seating for up to 12 passengers in an air-conditioned business class-only cabin. Even when at maximum capacity, total fuel consumption is at 120 litres per hour at high cruising speeds of up to 45 knots. That translates into 2.5 litres of fuel consumed for each nautical mile traveled.

“Seakeeping is exceptional at high speed, as the vessel is able to maintain speeds above 40 knots even when sailing through waves. In case of rough sea conditions or a technical problem, the vessel still retains its seaworthiness at lower speeds, behaving as a conventional catamaran would, particularly one with narrow hulls and a high cross-section.”

A2V added that the concept for the hull form has already been validated for commercial service, as evidenced by two vessels of nearly similar design having sailed for a combined total of more than 30,000 nautical miles since becoming operational in 2018. 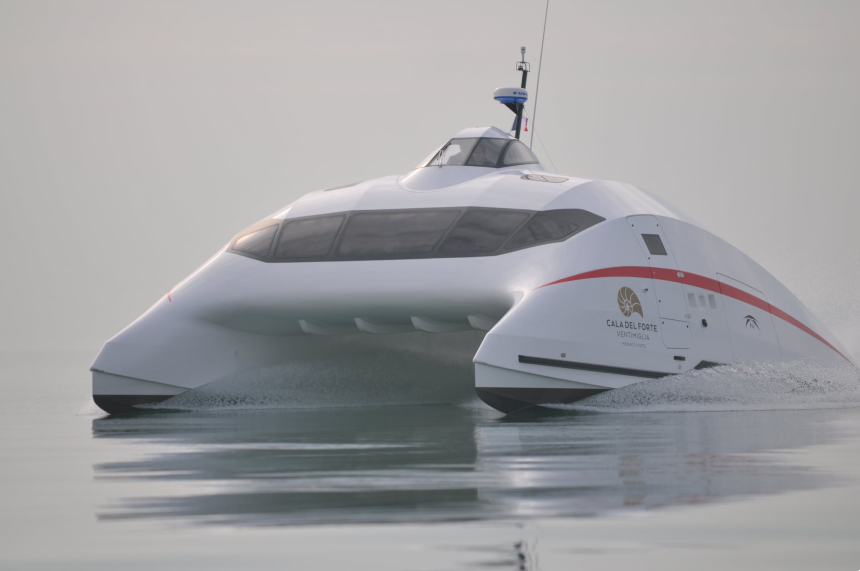 The builder said the unique aerofoil-shaped hull form was selected since it was thought to be the best possible means of providing Monaco Ports with a craft that was not only safe to operate but was also hydrodynamically efficient.

“We wanted to ensure passive stability through specific mass distribution relative to the centre of aerodynamic lift. As with our other newbuilding projects, the aerodynamic centre is placed aft of the vessel’s centre of gravity. This means that when a gust or a wave increases lift on the superstructures, this reduces trim angle and therefore angle of attack and aerodynamic lift, creating a stable equilibrium.”

A2V went on to explain that the traditional approach of placing the aerodynamic centre forward of the centre of gravity, like how it is placed on racing boats, would have made the equilibrium unstable at high speeds, thus raising the risk of the vessel flipping over.

The builder added that the vessel’s unconventional appearance meant that some design challenges became inevitable.

“The challenge in designing the vessel was in keeping the weight low and well-positioned while using exclusively sea-proven, heavy duty equipment and offering a high level of finishing and comfort,” A2V told Baird Maritime. “This required very close collaboration between designers, project managers, the vessel’s owners, and operators in the yard to optimise the integration of each component. We were able to overcome this by continually monitoring the vessel’s weight in the yard as it was being built, thanks to the placement of weight gauges underneath the hull.”

The builder added that configuring the hydrodynamic shape to allow very high efficiency at all speeds and displacements was also a challenge, mainly because the weight carried by the hull varied from 100 per cent to less than 50 per cent of total weight depending on the available aerodynamic lift.

Power for Monaco One is provided by two Yanmar 8LV 260kW diesel engines connected to France Helices surface-piercing propellers and Arneson ASD8 surface drives via ZF 220 gearboxes and three-metre carbon shafts. Recently completed sea trials have shown that the ferry can achieve speeds of up to 52 knots with the aid of the unique hull form.

An interesting piece of electronic equipment is the Repcet onboard computer designed to track large forms of marine life such as whales. The use of this system enables the vessel to avoid collisions with marine life even when cruising at high speeds. Most of the other electronics including the radar, depth sounder, GPS, AIS, and plotters are from Furuno.

For added safety during dockings, a fixed fendering system supplied by Manuplas runs along the whole length of the vessel.

Monaco One is being operated by Monaco Ports subsidiary Société Monégasque Internationale Portuaire (SMIP) exclusively for clients with yachts that berth at Cala del Forte in Ventimiglia and the Monaco Ports-owned Port Hercule. Thanks to its high operating speed, the ferry can complete the 12-nautical-mile route between Port Hercule and Cala del Forte in as little as 15 minutes. 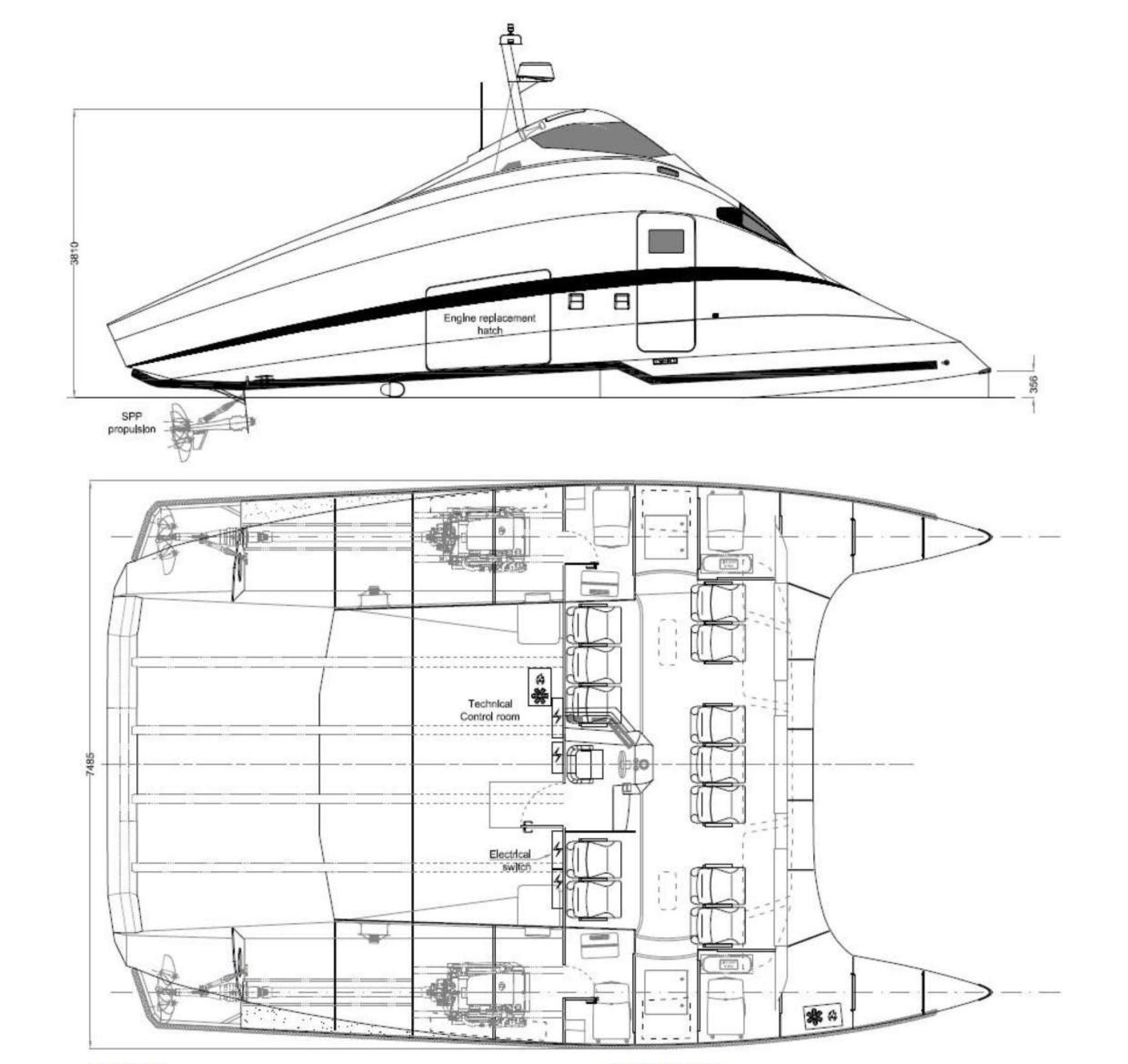