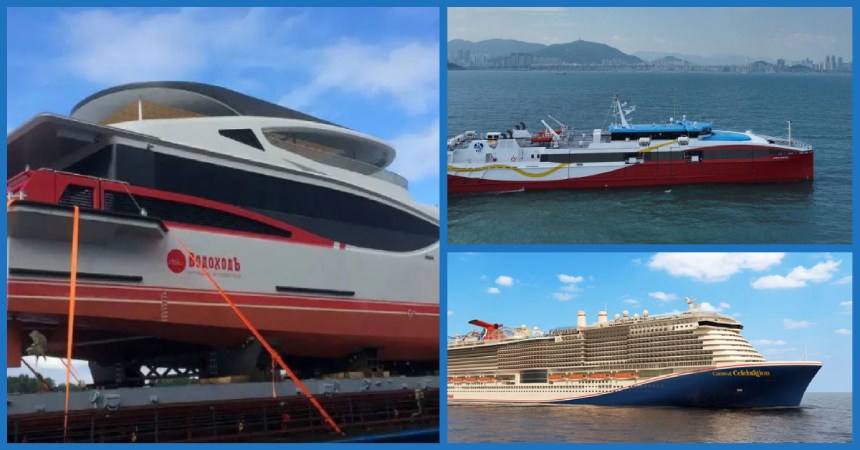 New catamaran ferries have been handed over to operators in South Korea and Russia as a US cruise line’s newest ship is nearing delivery following the recent completion of sea trials. An Italian yard meanwhile secures repeat cruise ship newbuilding orders from an existing US-based customer.

The 72-metre-long Korea Pride can transport 556 passengers at speeds of up to 41 knots courtesy of four MTU 16V4000 main engines. All passengers will be seated on a single deck and boarding and disembarkation will be via six doors.

The main cabin is divided into economy, business class, and first class cabins. A central amenities block features a large, well-equipped kiosk in addition to toilets and a room for mothers with small children.

At the aft end of the main deck is a crew area with mess room, office, and toilet. A medical room is also available on board.

Built by local shipyard Emperium, Ecokhod is the first in a new series of electric ferries in the Vodohod fleet. It is slated to commence operational sailings in May 2023.

A total of 130 passengers will be housed on two decks with facilities that include toilets and a snack bar.

The ship underwent several tests, which are meant to determine its capability and performance. These included manoeuvring tests, such as endurance tests, steering tests, speed tests, and thruster tests.

Built by Meyer Turku in Finland, Carnival Celebration is due for delivery later this year. It will sail on its maiden operational voyage in November.

Viking Cruises has awarded Italian shipyard Fincantieri a contract for the construction of four additional vessels.

Fincantieri will now build a total of six ships for Viking. Deliveries of the third through sixth vessels will take place between 2026 and 2028.

Fincantieri said the vessels will be capable of being fitted with propulsion systems powered by hydrogen fuel cells.