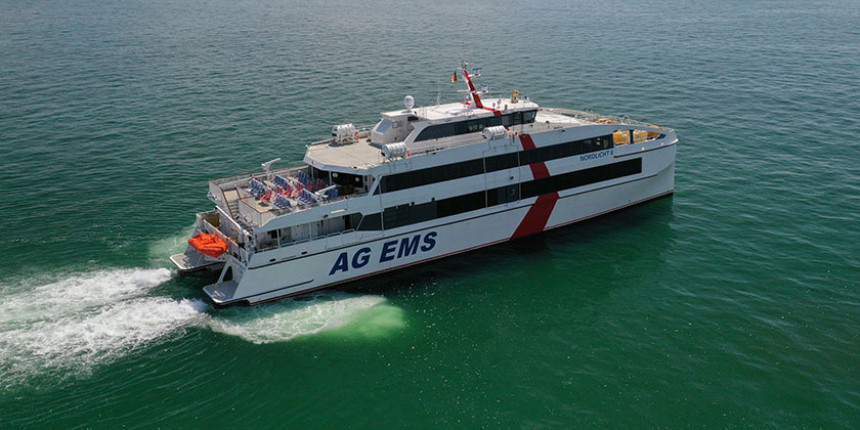 A new catamaran ferry has been delivered to German operator Ems by Singapore-based Penguin International.

The 48-metre vessel is capable of carrying up to 450 passengers, with an additional 52 exterior passenger seats and tables. The main deck consists of 248 economy class passenger seats with a large kiosk and racks for small luggage items.

Aft of the main passenger lounge is a large dedicated luggage room, and aft of this is a section containing the crew accommodation.

The upper deck is divided into two cabins, with a 111-passenger cabin amidships and a business class cabin for 96 passengers forward. There are views over the foredeck as well as discreet boarding facilities.

The two passenger decks are linked by both an open stairwell and an elevator. The third deck contains the wheelhouse, a crew mess, and senior crew cabins.

Power is provided by two MAN 175D 2,960kW main diesel engines. These deliver a maximum speed in excess of 36 knots and a service speed of 33 knots.

The vessel also features a high bow and a motion damping system consisting of T-foils and interceptors provided by Naiad.

Nordlicht II will be operated on a number of routes, including serving the North Sea islands of Borkum and Helgoland.