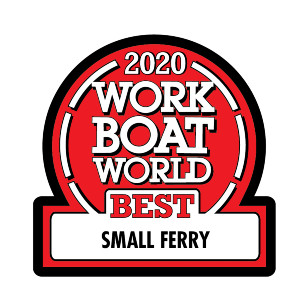 They rarely produce a catamaran, and not many ferries, but have excelled themselves with this fine addition to the busy TransPerth Swan River fleet. She is a 24-metre catamaran with very impressive passenger capacity.

“Tricia is a fairly unique vessel for a unique application,” Southerly Designs’ Andrew Taylor told Baird Maritime. “Being a new vessel on the highly visible inner-city service certainly drew an uncommon amount of media attention. As it is a non-seagoing vessel, we had to un-learn quite a significant amount of the assumptions we have traditionally incorporated into our seagoing designs.”

In addition to the challenge of traversing the somewhat unfamiliar territory of non-seagoing vessel newbuildings, both Southerly Designs and Dongara Marine also needed to overcome regulatory hurdles brought about by ever changing rules.

“Fortunately,” said Dongara Marine’s Rohan Warr, “we have seen the National Standard for Commercial Vessels (NSCV) becoming fairly stable in terms of a regulatory regime, at least from the design and construction side. As we have both an experienced design partner and a good relationship with an AMSA-accredited surveyor, it’s quite manageable from our perspective, and we hope it remains fairly constant from now on.”

Warr further remarked, though, that culture shock is still prevalent, especially among builders and designers who are dealing with the new regulations for the first time.

“For those who are still used to the old USL Code ways, there is still sometimes an educative and awareness element to overcome. It’s important, though, that people realise that the NSCV, combined with other Australian regulations, creates a sophisticated and high level set of standards. The fact that some overseas yards with experience building to international class rules have experienced issues meeting our domestic requirements attests to that.

“As much as people may rail against it,” added Warr, “the fact is that we simply can’t do what was done ‘back then’ anymore.”

Fortunately for the Southerly Designs-Dongara Marine team, there continue to be prospects in the Australia ferry newbuilding market, even after it suffered a huge blow from Covid-19.

“We will expect to see a number of operators either upgrading or replacing older vessels,” Taylor remarked. “This is in order to accommodate greater ability to cope with social distancing, separation of crew and passengers, and other measures to allow them to continue operating in the post-Covid world.”

Taylor, however, has admitted that the demand for ferries in Australia is quite limited, and in Western Australia significantly so. The company therefore claims it is more than likely that it won’t be producing construction plans for any further ferries in the next 12 months. Thus, its future newbuilding projects in WA will be focused more on leisure and government vessels, including those used in search and rescue.

“We will be continuing to rely on international work across pilotage, patrol, oil and gas and construction to sustain and build our business moving forward,” Taylor said.

“At the moment,” Warr told Baird Maritime, “we are actually as busy as we have ever been, with significant newbuilding and refit/modification projects underway. Those projects ensure we have at least some work right through 2021 and into 2022; that’s a great position to be in considering the circumstances. That said we will by no means be at full capacity for the duration so we continue to work hard to secure new projects.”

Dongara Marine added that the new contracts in hand, confidence in its own products, and its ability to adapt to client and market needs all combine to, “make us feel optimistic for the future.”