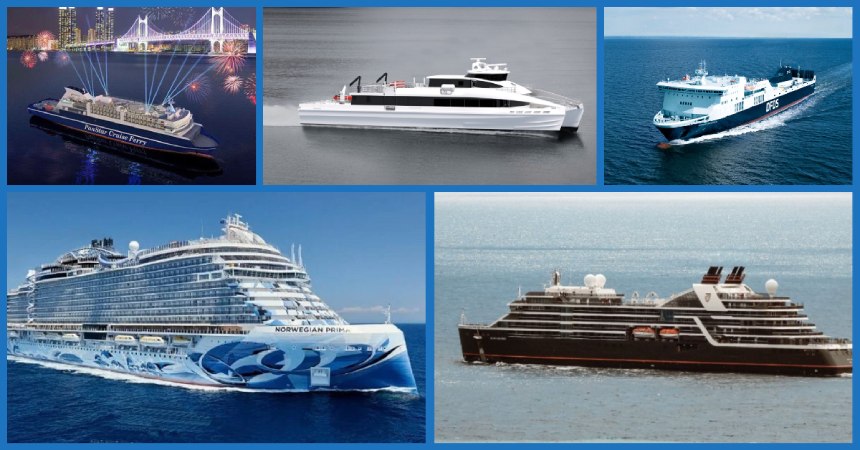 An Italian yard delivers the first in a new series of six cruise ships to a US-based operator as the second ship in the same series hits the water. A recently delivered expedition ship sails on its maiden voyage, covering destinations in the higher latitudes. Ferry orders have been placed in Norway and South Korea. A new passenger service will be trialed by a Danish shipping line between Ireland and continental Europe. Lastly, Russia starts considering the commencement of sightseeing tours in a popular inland waterway in Siberia.

Norwegian Cruise Line (NCL) took delivery of the first in a new series of six cruise ships on Friday, July 29.

The remaining five ships in NCL’s Prima-class will be delivered by 2027.

Ultra-luxury ocean and expedition cruise line Seabourn has confirmed that its first ship, Seabourn Venture, has departed Tromso, Norway, on its maiden voyage.

The ship is currently sailing on 12-day Northern Isles expedition in the Arctic and Norway’s Svalbard Archipelago.
In October 2022, the ship will relocate to the southern hemisphere. It will then serve itineraries in the Caribbean, Central America, Colombia, Ecuador, Peru, and Chile on a series of 10- to 14-day voyages.

Between November 2022 and February 2023, Seabourn Venture will cruise along Chile then sail to Antarctica before crossing back to explore South Georgia and the Falkland Islands. In March and April 2023, it will embark on a series of seven- to 12-day expedition voyages in Brazil and the Amazon.

Norwegian operator Norled has awarded local shipbuilder Brødrene Aa a contract for the construction of two electric high-speed vessels in a series.

The vessels will each have a length of 40.6 metres and capacity for 130 passengers plus cargo. One 4MWh battery pack will deliver a maximum speed of 30 knots and a range of 60 nautical miles at a cruising speed of 28 knots.

Construction of the ferries will commence later this year, Deliveries are scheduled for January 2024.

South Korean shipowner the PanStar Group has confirmed its plans to acquire a new luxury cruise ferry, the first vessel of its kind to be built and operated in the country.

Once completed, the vessel will have a length of 170 metres, a displacement of 22,000 tonnes, and capacity for 353 passengers. It will also have a secondary freight transport role with deck space for up to 250 TEUs.

Amenities will include dining areas, cafes, fitness rooms, a swimming pool, and a jogging track.

The ferry will be built by Daesun Shipbuilding and Engineering. It is scheduled to commence operational sailings between Busan and the Japanese city of Osaka in 2025.

A new passenger service between Ireland and France will be launched later this week by Danish ferry operator DFDS.

Passenger travel will be introduced on a trial basis, as an addition to the existing freight service between the two ports.

For the first time, DFDS will offer tourists a direct link between South-East Ireland and Northern France. The new service will be focused on car and motorhome traffic at launch, with limited capacity to complement the company’s freight traffic.

Crossings on the route will take 23 hours and 45 minutes and will commence on Friday, August 5.

Russian officials to deliberate on sightseeing tours in Lake Baikal

The Russian government’s Commission for the Protection of Lake Baikal and other local agencies have begun considering the possibility of opening Lake Baikal in southern Siberia as a possible location for maritime tourism sailings.

The committee members have also commenced discussions on the construction of new berths, bunkering facilities, and equipment of collecting and disposing of waste from vessels.

The project is part of a broader initiative of developing and promoting the greater Baikal territory as a tourism destination.