A renewed wave of investments in the Brazilian offshore industry has appeared on the horizon, kindling the demand for highly specialised vessels such as this new pair of dive support vessels, which will maintain offshore assets, especially in deep water, by performing diving operations and ROV (remotely operated vehicles) surveys.

Belov Engenharia won the tender to operate two shallow dive support vessels for Petrobras, Brazil’s national oil company. These vessels operate hundreds of miles offshore for up to two weeks at a time. Hoping to compete for additional tenders to come, Belov decided to build the vessels itself at its own fabrication facility in Salvador, to a design from Robert Allan Ltd (RAL).

Belov has been a leader in diving operations for the Brazilian offshore market for a number of years, but only recently with its own vessels. Most vessels operating in that market are older or too large for their applications, including some older PSVs converted to DSVs, which require larger crews and higher fuel consumption.

“Belov challenged RAL with a requirement to keep the vessel under 500 GT,” RAL told Baird Maritime. “This was quite challenging given what the mission required from the vessel.

“Belov agreed to build the wheelhouse and deckhouse in aluminium, saving weight and allowing a reduction in the hull volume required to support that weight.”

Petrobras had a requirement for a gym aboard, but with minimum headroom requirements. A local deck height increase was required just for the treadmill to respect the headroom limits!

The headroom in the stern waterjet compartment is challenging for an operator. The hull depth was reduced to a minimum and therefore the main deck was kept low to meet the required volume needed to meet the maximum gross tonnage. Because it’s a displacement hull, it was important to keep the transom immersion as low as possible, while making sure it was deep enough that the waterjets would properly self-prime.

The owner also had to squeeze in three 500kW electric motors and the waterjets into the constrained hull and allow for future maintenance. Ultimately, the deck height was increased to improve access and a hatch fitted over each jet to allow better headroom for maintenance or removal.

“Belov Engenharia developed the detailed design, construction and commissioning of the Belov Amaralina in just over 18 months,” added RAL. “This is an outstanding feat for a newly built shipyard.”

While the construction ashore was going on, Belov Engenharia also constructed its own floating drydock to launch these vessels and to use in maintaining their existing fleet.

The vessels were designed to be fitted with an ROV LARS (launch and recovery system), an aft mounted A-Frame to operate the diving bell, a decompression chamber to support the divers, and more spacious crew quarters.

Waterjets are used to ensure diver safety. Because waterjets are typically used on higher speed vessels, extensive self-propelled CFD analysis (including waterjet tunnel flow) was performed in-house by Robert Allan to verify resistance and thrust at the slower speeds that this design will operate at when on station.

“Petrobras’s requirements for diver protection made waterjets essential, however this is a displacement vessel operating at only 12 knots which makes thrust predictions challenging,” said RAL. “The waterjets are operating fully immersed and the flow around the transom interacts with the jet output in a novel way that was not well understood. In-house CFD analysis was performed by RAL to model how waterjets operate at these slow speeds.

“HamiltonJet provided details of the internal geometry of the jets to assist modelling and gain an understanding of the added resistance of sea water flow through its internal components, and the flow around the stern.”

Specifying a diesel-electric system with four identical generators gave the pair a significant level of redundancy, and also allows one or two generators to supply power during periods of low demand. This can happen when in non-DP loiter/standby operations or when DP weather conditions are light, which can be a significant part of the operations.

With a similar philosophy regarding redundancy, the vessels also have three bow thrusters.

The diesel-electric propulsion system consists of four identical Caterpillar C18 generators, each of 568 kW. This gives simplicity for maintenance and spare parts, and some of the generators can be shut off during periods of low power demand.

The vessel is well equipped for multiple types of dive operations, with a stern A-frame, on-deck decompression chamber, and a large ROV with its own side crane deployment system. There is also a large knuckle boom cargo crane fitted to one side of the vessel, with reinforcement on the other side of the vessel for an additional future crane.

With all this deck equipment, RAL also had to keep in mind a clear path for the divers to make their way from the inside change room to the stern and room for them to get their gear on.

For more news, opinion and vessel reviews as part of this month’s Offshore Week, click here 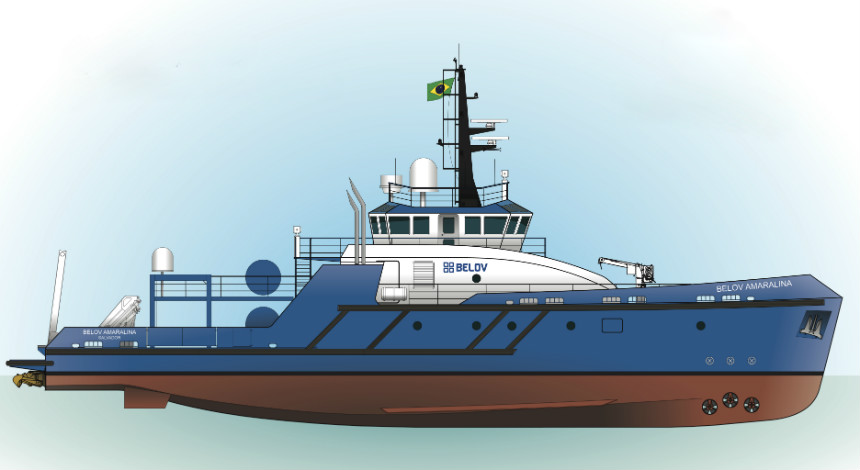