Sister vessels MHO Asgard and MHO Apollo were designed by MHO-Co CEO Mik Henriksen to each be capable of transporting 24 windfarm technicians as well as mixed payloads totalling 57 tonnes on 110-square-metre and 15-square-metre fore and aft cargo decks. The accommodation areas on each vessel include eight single cabins, a large lounge with suspension seats for the passengers, two toilets, a wet room with shower, and a pantry complete with a stove, a microwave, three refrigerators, and three freezers.

Each crewboat has an LOA of 35 metres, a beam of 11 metres, a maximum draught of 1.59 metres, and a gross tonnage of 412. The vessels are each powered by hybrid electric systems that are also capable of operating on fully electric mode for significantly reduced emissions.

The crewboats can sail at speeds of up to 23 knots and a cruise economically at 15 knots. High-speed sailings are made smoother thanks to the installation of active ride control from Humphree. A Volvo D5 auxiliary engine is also fitted on each vessel.

The hybrid propulsion systems on each crewboat are designed to be reconfigured at a later stage for operation on more environment-friendly propulsion options such as hydrogen fuel cells.

The crewboats feature electronics from Furuno, Motorola, McMurdo, and Navitron while an array of 24 CCTV cameras provides improved views of the areas in and around each vessel. Power for all these systems is supplied by five Volvo D8 generators in a modular arrangement. 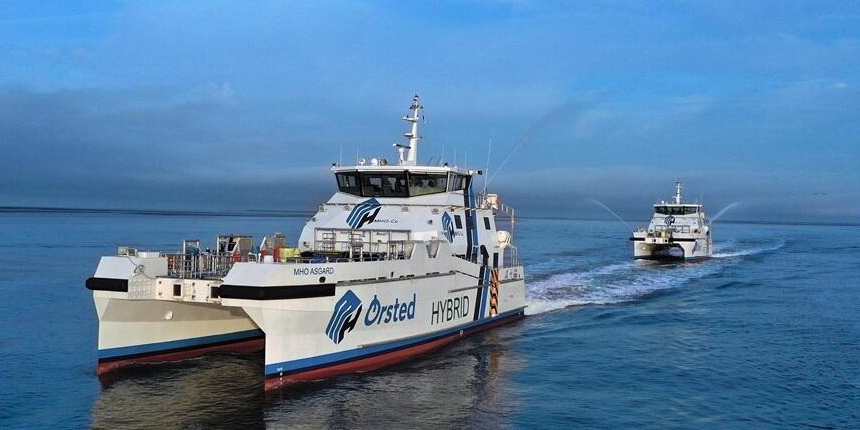 In addition to the main helm control, there are joystick-equipped wing stations on either side of the bridge so that the crew are provided with unobstructed views to more easily manoeuvre alongside wind turbines for loading or unloading personnel and cargo. The bridge also has crew amenities including a sofa with table, a workstation, and space for a refrigerator, a kettle, and a coffeemaker.

Shortly after their arrival in Europe, MHO Asgard and MHO Apollo began operating under contract with Ørsted at the Hornsea Two offshore wind farm in the North Sea off the UK coast.