The Damen Shipyards Group, through its Damen Shipyards Antalya facilities in Turkey, has completed construction of a new high-speed vessel developed in response to the offshore industry’s need for an alternative type of crewboat capable of cost-effective operation and boasting improved safety features.

The Bureau Veritas-classed, all-aluminium Aqua Helix significantly deviates from the typical crewboat design, being noticeably larger than its contemporaries. It has an LOA of 73.4 metres, a beam of 11 metres, a maximum draught of 4.5 metres, and a maximum deadweight of 105 tonnes. Its dimensions enable it to accommodate up to 122 technicians and 12 crewmembers on a single trip, allowing an operator to conduct fewer sailings and, in turn, keep fuel and maintenance costs to a minimum.

The foredeck has an area of 35 square metres and a deck load rating of 2.5 tonnes per square metre, making the crewboat an ideal vessel for cargo transfer duties as well. Transfers of personnel are done mainly via a custom-made Ampelmann S-type, motion-compensated telescoping gangway, which boasts reduced weight and fully electric operation to facilitate transfers under a wide range of sea states. The electrically powered hexapod platform of the gangway ensures stability in significant wave heights of up to three metres and allows crew and personnel to walk to work safely and efficiently.

A basket that can carry 10 people is also available as a backup transfer system to and from the bridge deck.

Damen said that the vessel’s weight distribution has also been optimised for smooth and comfortable roll periods within the limits set by BV’s stability requirements. An efficient bow design makes it possible for the vessel to operate in significant wave heights of up to three metres and helps minimise occurrences of slamming, enabling fuel consumption to be reduced even further. The unique bow design was incorporated in anticipation of some crew transfer voyages lasting as much as 12 hours.

The hull sides were also increased upwards along the accommodation decks to add to the vessel’s structural integrity. This way, more lightweight structural beams will suffice. By fully integrating the foundation of the gangway into the vessel structure, the total weight of the ship is further reduced, allowing for greater speeds.

For improved comfort, there are reclining seats for all 122 technicians across two decks as well as amenities including two personnel areas, a bar, and a lounge. The interior spaces benefit from a 785,000BTU/hr air conditioning system and also feature wi-fi connectivity and personalised entertainment options in the form of video and music on demand.

The crew also benefit from the much greater interior space. The main and lower decks both feature crew cabins and technical spaces while the main deck also has a mess with an adjacent pantry. The wheelhouse meanwhile was designed to provide clear 360-degree visibility.

Four MTU engines drive HamiltonJet propulsion units via Reintjes VLJ-type gearboxes to deliver a maximum speed of 40 knots and a range of 800 nautical miles at a cruising speed of 37 knots. The engine room also comes equipped with a ventilation system in the form of two extraction fans.

A VEEM gyrostabiliser and Naiad Dynamics automatic active ride control interceptors ensure a comfortable ride even under typical operating conditions while a Kongsberg Maritime DP2 system helps guarantee safer transfers to and from offshore platforms. The crewboat also has a set of Veth bow thrusters for enhanced low-speed manoeuvrability during berthing and mooring.

Danfoss shaft generators supply electrical power for the vessel’s vast array of navigation and communication electronics, which include X- and S-band radars, compasses, ECDIS, two searchlights, GMDSS for A2 areas, a PA and intercom system, and an HSC-approved night vision camera. A 95ekW emergency generator has also been installed.

The crewboat is also adequately equipped for dealing with emergencies. The firefighting setup consists of sprinkler systems in the accommodation spaces, a fixed gas-flooding system in the engine room, and manually-operated extinguishers. Also fitted on board is a rescue boat with a davit launch system.

Aqua Helix initially underwent proof of concept trials in the North Sea following its completion in 2021. Final commissioning took place in March 2022 after the specialised Ampelmann gangway was installed. OceanXpress, a joint venture of the Damen Shipyards Group and Ampelmann, is managing the vessel for operations between Den Helder on the Dutch mainland and offshore installations in the North Sea. 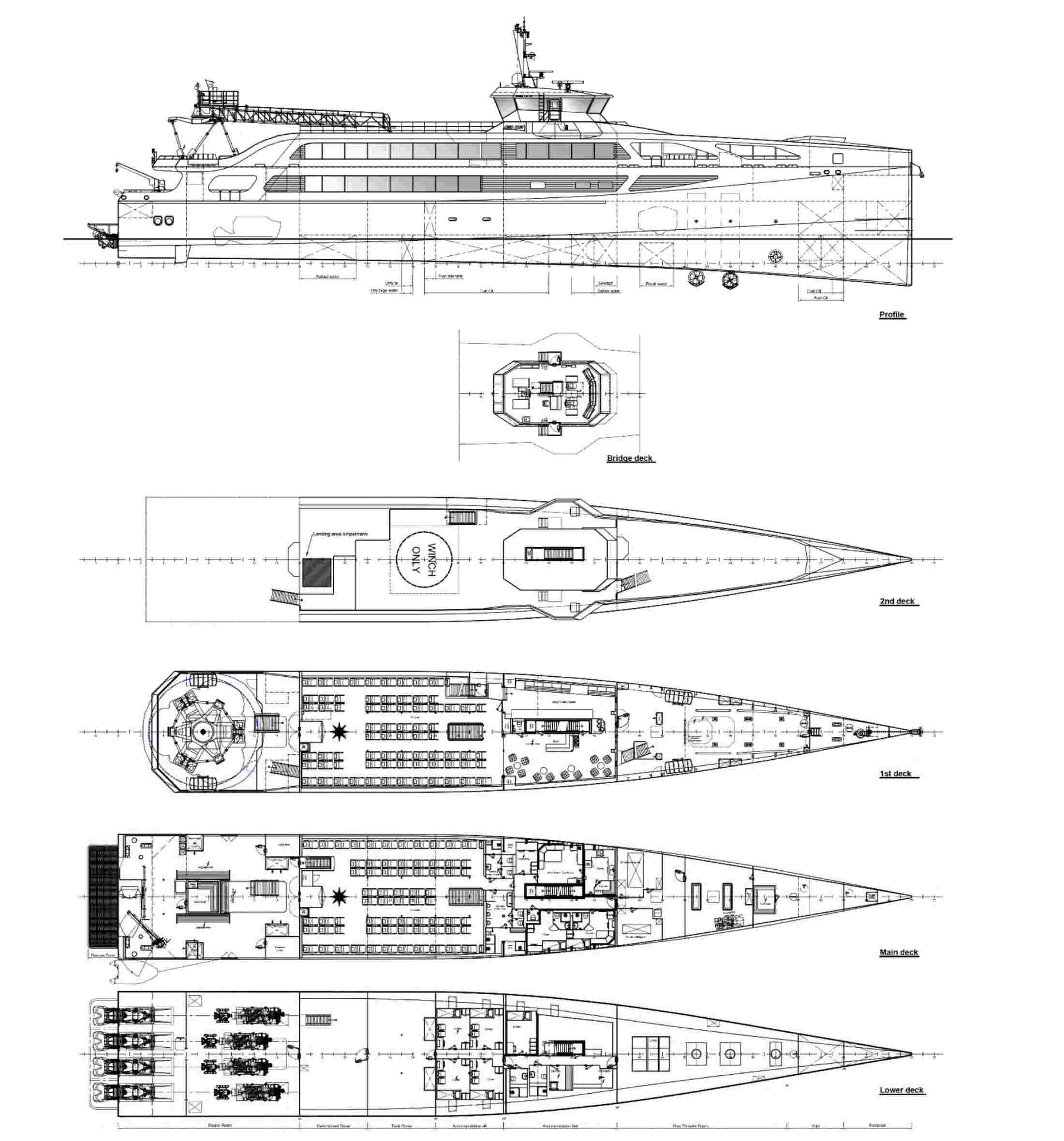