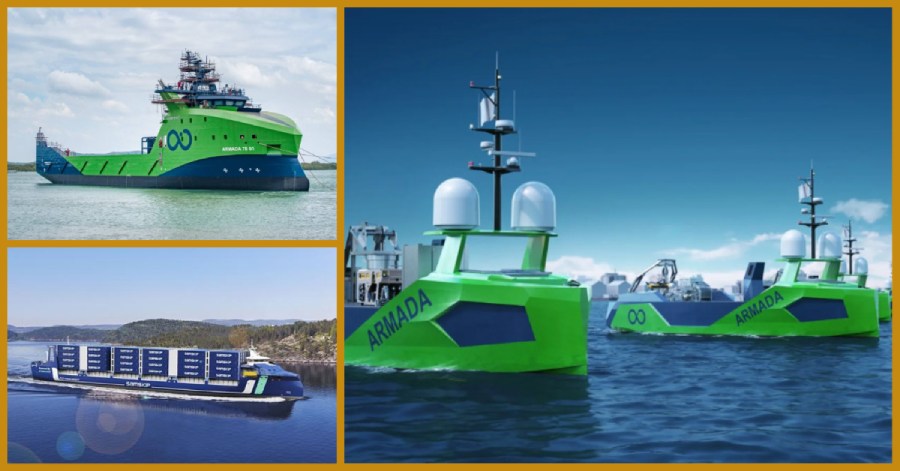 Waiting for Godot is a stage play where (Spoiler alert!) very little actually happens. Two tramps named Vladimir and Estragon meet beside a tree. They are waiting for a character called Godot. They meet a couple of minor characters. They talk. They wait. They talk some more. A boy arrives to tell them that Godot won’t be coming on that day, but surely tomorrow he will arrive. They wait some more. The minor characters come and go. It is pretty boring.

All this is rather similar to Ocean Infinity’s newbuilding programme of autonomous survey vessels, a programme that was first announced in February 2020 with delivery of the first units forecast in December of that year from a Norwegian shipyard.

In its latest glossy video (here), Ocean Infinity boasts that it is “launching the largest and most innovative fleet of robotic ships” and then shows a computer graphic of trio of 21-metre-long DP1 uncrewed vessels sailing through an operational wind farm. It’s not clear to me whether any windfarm operator would want an ice-class DP1 vessel under remote operation sailing close to critical infrastructure, given that a single point of failure could result in the unit losing station.

However, this problem remains hypothetical at the time of writing. Twenty months on from the supposed first delivery date, precisely no newbuildings have actually been delivered. Like Vladimir and Estragon, we are still waiting for the functioning uncrewed vessels to enter service, even as rivals XOcean and Fugro have clocked up two years of experience with their smaller but highly functional, autonomous survey vessels. You can download a podcast of XOcean and Fugro’s CEOs discussing their working technology here.

Instead, Ocean Infinity has embarked on an ambitious public relations campaign to emphasise its claims to be transforming the entire marine industry, and a drive to collect yet more government subsidies. We have already highlighted here how Ocean Infinity managed to obtain a British government grant of nearly US$2 million for its new office and remote operations centre in Southampton, branding the facility a key part of “Silicon Wharf” in the subsidy application from 2020, which you can read on the Solent Local Enterprise Partnership website here.

We then highlighted that the company had picked up another US$1 million from the British taxpayer (here) in the first phase of the Clean Maritime Demonstration Competition in 2021.

Norwegian taxpayers shell out US$15 million

But it’s not just the UK taxpayers who are funding Ocean Infinity. In June, the company announced that its ambitions stretch far beyond offshore. Together with Samskip, Ocean Infinity has been awarded NOK150 million (US$15 million) in funding from Norwegian state enterprise ENOVA for SeaShuttle, a project to build two hydrogen-powered, remotely controlled and autonomous-ready containerships for delivery by 2025.

ENOVA operates under Norway’s Ministry of Climate and Environment, with a mission to promote a shift towards more environmentally friendly energy consumption and production, as well as technologies based on sustainable energy.

But what are Norwegian taxpayers actually getting for their money?

Look at the caveats and weep

Note the use of the phrase “autonomous ready” to describe the vessels in the press release, which make it likely that they won’t actually be autonomously operated when they enter service, just as Ocean Infinity has hinted that its own supposedly autonomous survey vessels will likely be “lean-crewed” when they deliver from the shipyard, rather than uncrewed.

In our mind, this creates the worst of all worlds – vessels that have to be expensively built and equipped for compliance with both crewed classification society rules and with all the technological bells and whistles required for future autonomous operations. We have highlighted here that Second Degree autonomy is economic folly. It’s building a robot taxi and then putting a human driver behind the wheel, a plan that Uber abandoned.

Ocean Infinity and Samskip confirm that a “diesel electric propulsion plant will be on board as backup.”

Of course, as a backup!

When will there be green hydrogen?

“We have faith that green hydrogen will be affordable and available in Norway,” the CEO of Samskip went on to say without giving any timeframe for this scenario, whatsoever. It is true that the North of Norway has plentiful supplies of hydro-electricity and that a lot of start-ups are planning to set up electrolysis plants to create green hydrogen. However, whether this is desirable as Europe faces an electricity supply crunch is not clear. Surely more interconnectors to the European grid, or even to southern Norway, would ease concerns that Germans in particular will face power rationing in the coming winter? Norway is already warning (here) that the warm summer this year has led to the reservoirs of its hydroplants falling to dangerously low levels, so it is suspending electricity exports in August to refill them.

What’s also bizarre is that Ocean Infinity that has received state funding from the UK government to develop its own ammonia-powered propulsion system in the Clean Maritime Demonstration Competition. It’s newbuildings at Vard even have an “ammonia space” in the event that such technology becomes available, but will be diesel-electric hybrid when they deliver. Now, eight months later, the company is receiving new Norwegian government funding to develop a pair of vessels powered by a hydrogen fuel cell.

What, pray tell, is next? A French government grant based on some nifty green nuclear technology, and a subsidy from the Costa Rican state for eco-friendly banana-powered vessels?

Anyway, on day one, if the SeaShuttle vessels deliver in 2025, it is likely (or at least possible) that the Norwegian taxpayer will have helped fund a pair of conventional diesel-electric feeder vessels with normal manning by human seafarers onboard, carrying just 500 containers each.

Apart from the newbuildings, the other delayed items we have been expecting from Ocean Infinity for a long time are the company’s accounts. In February 2020, the company posted its tens of millions of annual losses for 2017 and full year 2018 at Companies House (here).

“We are bored to death, there’s no denying it”

However, at this stage, actually seeing one of the new Ocean Infinity uncrewed surface vessels (USVs) in the water, working with or without crew, or seeing its 2019 and 2020 accounts, is rather like Waiting for Godot. That play confronts the audience with a void of meaning, challenging them with the blankness and boredom of the situation. Two and a half years on from the glitzy launch, we can share that sentiment.

Meanwhile, the British Government announced a second round of the Clean Maritime Demonstration Competition and has allocated up to US$15 million to support feasibility studies and pre-deployment trials in innovative clean maritime solutions. The round launched on May 24 and was open for applications until 11:00 local time on July 13.

What are the odds that Ocean Infinity has another taxpayer grant from that programme before its USV fleet is even in service or its 2019 results are published?

And while the taxpayers are waiting for a return on their ammonia- or hydrogen- or banana-powered innovation funds, they can admire one of the other investments Ocean Infinity has made, that must-have: a customised staircase for its lobby. According to the designers, who feature this creation here, Ocean Infinity “required a contemporary reception staircase with the ‘wow factor’ to create a favourable first impression for visitors. Alpine was tasked to create this stunning one-off staircase, a staircase that in a true sense was neither typically helical, nor spiral and certainly unique.”

As the lyrics of Led Zeppelin song Stairway to Heaven put it: “There’s a lady who’s sure, all that glitters is gold, and she’s buying a stairway to heaven.”

But not everything that glitters is gold, and not every company hyping its technology can actually deliver on time.

More information on one of the offshore holding companies behind Ocean Infinity are here in a Companies House filing (note 21 on page 26). Who is behind ACG of the Cayman Islands? Why can Ambrey file 2020 accounts when Ocean Infinity cannot even publish accounts for 2019?

Excellent summer reading is here and here. Don’t read Waiting for Godot, unless you are stuck at an airport, in which case it is most appropriate!