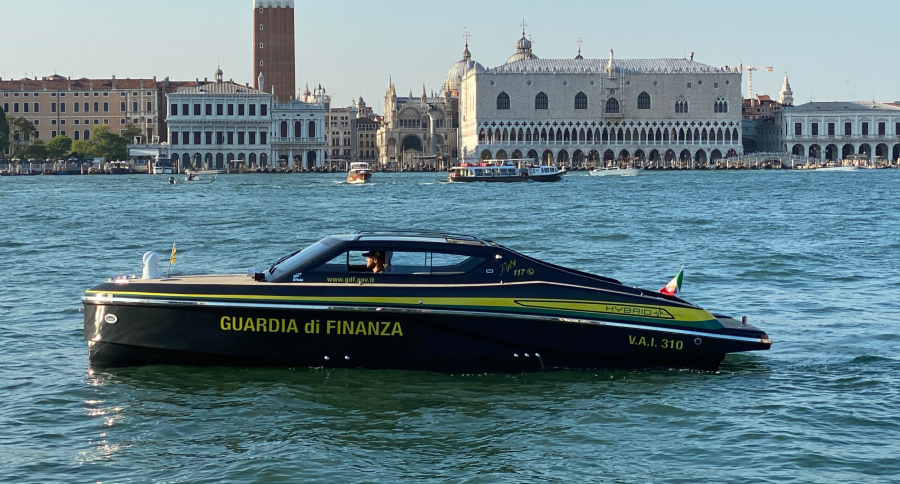 A new patrol and surveillance vessel recently entered service with the Guardia di Finanza (GdF), the main agency of the Italian Government tasked with combating both financial crime and narcotics trafficking. Built by local shipyard Effebi, the craft, which has given the official designation Vedetta Acque Interne (“Inland Water Patrol”) 310, is notable for being one of the first Italian-flagged maritime security vessels to be developed from the outset with a hybrid propulsion system.

The use of a hybrid low-emission, diesel-electric propulsion configuration had been requested by the GdF as the vessel is slated primarily for operation in the lagoon of the historic city of Venice, a popular tourist destination and an area that is also known for having a highly sensitive marine environment. The agency had also requested that the vessel have a shallow draught and a narrow beam to enable safe navigation through the many canals of the city. It also needed to possess a low height that would allow it to pass underneath Venice’s bridges even during instances of high tide.

Further, since laws are in place in Venice to address the issue of vessel wakes that cause both flooding and the erosion of the centuries-old foundations of the famed city, the new GdF patrol vessel was designed with a hydronamic hull shape to ensure a low degree of wave generation, particularly at the low cruising speeds wherein the electric motor would be normally engaged. The reduced emissions and noise also mean the vessel may be used on nighttime patrols in the lagoon when boat traffic would otherwise be limited. 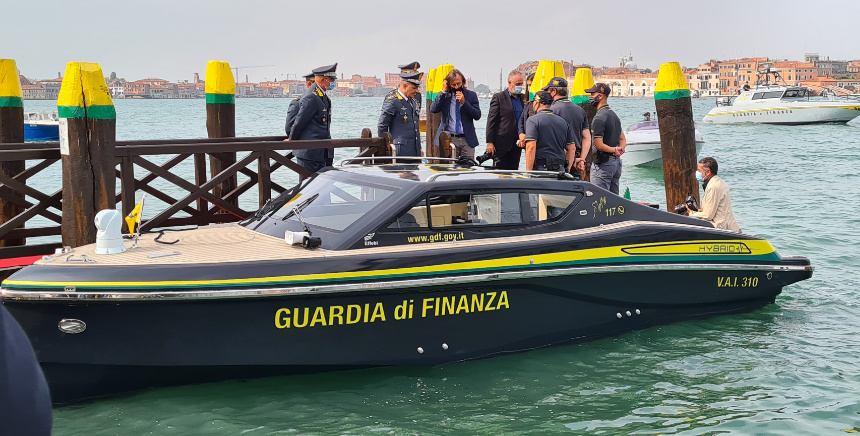 One other advantage offered by the new craft is its ability to conduct high-speed operations in more open coastal environments without sacrificing its ability to navigate effectively through the narrower inland waterways for which the city of Venice is also well-known. Thus, instead of having to use separate vessel types depending on the waterway environment, the GdF could easily transition between coastal and canal waterways while relying on only one capable enforcement platform.

Effebi had also taken into account the operator’s goal of reduced reliance on additional infrastructure that had been designed specifically for accommodating only one type of vessel. In particular, the new craft was built from the outset to be capable of docking seamlessly with the existing wooden briccole or dolphins that are found within Venice’s many canals.

The GdF patrol vessel has a length of eight metres, a beam of 2.45 metres, and a maximum height of 1.8 metres. Its suite of equipment includes a radar, magnetic and electronic compasses, a GPS, an echosounder, strobe lights, and a thermal imaging camera for use in low-visibility conditions.

The hybrid propulsion arrangement consists of an FNM marine diesel engine with a rated output of 246 kW and a 20kW Blue Hybrid System electric motor connected to a Mercury Marine MerCruiser Bravo III stern drive fitted with twin propellers. The diesel engine enables the craft to reach speeds of up to 32 knots during patrols and interceptions out in the open sea while the electric motor will deliver a cruising speed of five knots suitable for zero-emission navigation through Venice’s canals and near the more populated areas of the city.

VAI 310 has already begun operations with the GdF in an around Venice. Additional boats from the same series by Effebi are slated to enter service with the agency in the coming months.